Trump appointee floated plan to move Santa impersonators to the front of the line for the COVID-19 vaccine: report 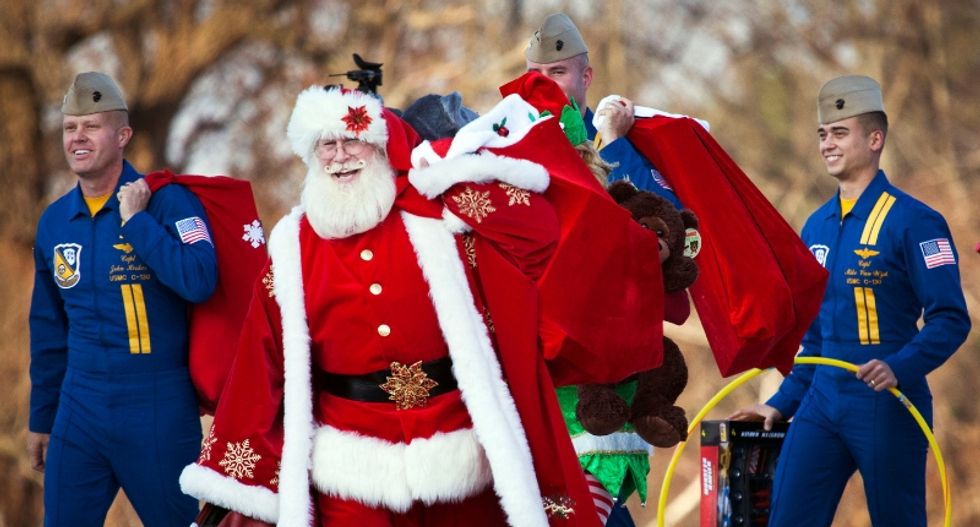 Marines with the Blue Angels and Santa bring toys for Toys for Tots. Image via Department of Defense.

The Wall Street Journal has uncovered information that one of President Donald J. Trump's HHS assistant secretaries, Michael Caputo, was plotting to deliver a super secret COVID-19 vaccine to Santa Claus performers - including Mrs. Claus and the elves - before the general public. The proposed $250 million campaign would have included performers agreeing to promote the vaccine to all the boys and girls who came to sit on their laps at Christmastime.

“This was our greatest hope for Christmas 2020, and now it looks like it won’t happen,” Ric Erwin, chairman of the Fraternal Order of Real Bearded Santas, told the Journal.

Erwin provided the audio recordings of his calls with Caputo, who said to him, “If you and your colleagues are not essential workers, I don’t know what is.”

Caputo also told Erwin, “I cannot wait to tell the president. He’s going to love this.”

The campaign would have included commercial television, online, podcast, and radio advertising in an effort to “defeat despair” and “inspire hope,” the audio revealed. Erwin said he had found almost 100 Santas who volunteered to participate. Democrats weren't buying the "good will towards men" gesture.

“We are concerned that the Trump Administration appears to be misusing taxpayer dollars to fund a political propaganda campaign—disguised as a public health effort—just weeks before a presidential election,” three Democratic members of Congress — Reps. James Clyburn (D-S.C.), Carolyn Maloney (D-N.Y.) and Raja Krishnamoorthi (D-Ill.) — wrote in a letter.

HHS Deputy Assistant Secretary Mark Weber denied the ads would be political, saying, “There is no room for political spin in the messages and materials designed by HHS to help Americans make informed decisions about the prevention and treatment of COVID-19 and flu.” He added that the campaign would “provide important public health, therapeutic and vaccine information as the country reopens, and give Americans information on the phases of reopening.”

Salon's Zachary Petrizzo shared two video showing Lindell fielding calls from pranksters. In one video, Lindell is led to believe that former president Donald Trump is calling in to the event.