Trump continues to ‘lie to us’ about COVID-19 ending — and his facts don’t add up: report 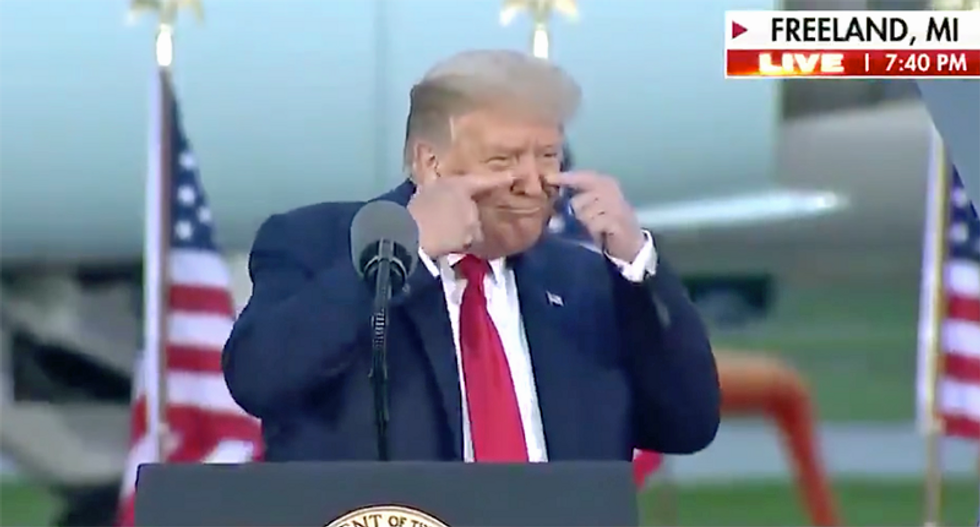 President Donald J. Trump joked Tuesday about the coronavirus pandemic that's plagued his own country, killing more than 227,000 Americans to date. And, as the death toll from coronavirus in America steadily climbs with every passing day, it has not stopped the 74-year-old commander-in-chief from proclaiming the nation is "rounding the turn."

According to the CDC, the seven-day average of new cases is nearly 70,000 -- a record number that is only expected to get worse. The COVID Tracking Project cites that more than 42,000 people are currently hospitalized with COVID-19, up from an estimated 30,000 one month ago.

In Lansing, MI Tuesday at a rally, Trump told his mostly unmasked supporters, “Do you ever notice, they don’t use the word ‘death,’ they use the word ‘cases’? Like, Barron Trump is a case. He has sniffles, he was sniffling. One Kleenex, that’s all he needed, and he was better. But he’s a case.”

On Wednesday during a campaign stop in Bullhead City, AZ, Trump claimed that a vaccine was coming “momentarily,” although scientists and pharmaceutical companies do not agree that this is true.

Trump's assessment of the pandemic's trajectory is not rooted in reality. Former Food and Drug Administration (FDA) chief Scott Gottlieb told CNBC Monday that the U.S. was at a "tipping point" of exponential spread in much of the country.

Journalist Alexander Burns wrote in The New York Times Wednesday, "Mr. Trump’s description of the disease is ungrounded in fact, and his theory of countering it has clashed with the preferences of medical officials at every level of government. The country has reported more than 8.8 million cases of the coronavirus, including a 39 percent increase in new cases over the last 14 days. More than 227,000 Americans have perished from the disease."

Felix Vristow, 40, of Philadelphia, said, “Our leader lied to us, in my eyes. We experienced way too many deaths, and it could have been prevented if the situation was addressed earlier or more honestly.”

Burns continued later, "Like much else about Mr. Trump’s mode of leadership, his view of the pandemic has found an enthusiastic audience from a minority of the country. A national poll published recently by The Times found that nearly two in five voters agreed with Mr. Trump that the worst of the crisis was over. The president’s push to fully reopen the economy is not without appeal, at least to the voters who already support him, and they have remained loyal through various personal and political scandals, policy breakdowns and an impeachment trial."