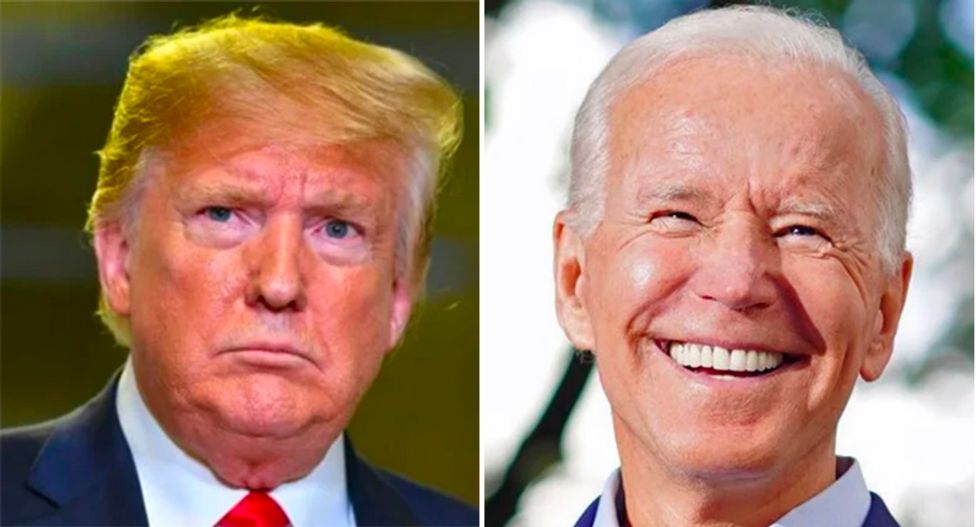 President Donald Trump defied the Covid-19 virus, disastrous opinion polls and new economic turmoil Tuesday in a stormy return from hospitalization, while surging challenger Joe Biden appealed for Americans to unite against the "forces of darkness."

There have been few tougher days for Trump since he came to power after his shock 2016 election win.

Still being treated with a powerful cocktail of drugs for the coronavirus after three nights in hospital, he was scrambling to get his reelection campaign back on track ahead of November 3 election day -- just four weeks away.

Latest polls forecast a huge victory for Biden, with CNN giving the Democrat a national advantage of 57 percent to 41 percent among likely voters, with women voters going 66 to 32 percent in his favor.

Biden's advance comes as Trump has been forced off the campaign trail after falling ill last Friday to the virus that has already killed some 210,000 Americans.

With what White House doctors describe as his rapid recovery, Trump is doubling down on his controversial position that Covid-19 is taken too seriously, painting himself as a fighter who took on the virus and easily won.

After telling Americans in a speech from the White House balcony Monday that they should stop fearing Covid-19 and "don't let it dominate you," he attacked the media Tuesday for not paying more attention to what he said were his many successes.

"The Fake News Media refuses to discuss how good the Economy and Stock Market, including JOBS under the Trump Administration, are doing. We will soon be in RECORD TERRITORY," he tweeted.

"All they want to discuss is COVID 19, where they won't say it, but we beat the Dems all day long, also!!!"

But Trump is in trouble on almost every front and what used to be his strongest card -- the economy -- is not helping either.

The huge shock caused by this year's coronavirus shutdown has yet to dissipate, and on Tuesday there was more turmoil when Trump halted negotiations in Congress on another stimulus package to save struggling businesses.

Trump accused Democrats of seeking "to bailout poorly run, high crime, Democrat States" and said that negotiations could begin again only after the election -- "after I win."

The Republican's hardball tactics drew a furious response from Biden, who said Trump "turned his back" on Americans struggling due to the crisis.

Biden also stuck to his so-far successful strategy of appealing to a broad-based yearning for calm, with his visit to the Civil War battlefield of Gettysburg to discuss saving "the soul of America."

"The forces of darkness, the forces of division, the forces of yesterday are pulling us apart, holding us down and holding us back," Biden said at the hallowed Pennsylvania grounds where Abraham Lincoln's Union forces won a decisive victory over Confederate troops in 1863.

"We can end this era of division, we can end the hate and the fear. We can be what we are at our best -- the United States of America," he said.

Biden and Trump are scheduled to square off again on October 15, but Biden told reporters: "If he still has COVID, we shouldn't have a debate."

"It's a very serious problem, so I will be guided by... what the docs say is the right thing to do," Biden said.

His running mate Kamala Harris, meanwhile, was set to debate Vice President Mike Pence in Utah Wednesday, with a plexiglass barrier for coronavirus prevention between the two.

Giving Biden another lift Tuesday, popular former first lady Michelle Obama issued a 24-minute video address in which she branded Trump "racist" and urged people to vote for Biden "like your lives depend on it."

Trump is working overtime to persuade voters that he is back to full strength despite the hospitalization.

"FEELING GREAT!" he tweeted, also insisting that he is "looking forward" to holding a second scheduled debate against Biden in Miami on October 15.

And in a medical bulletin, the presidential doctor said Trump "reports no symptoms" and "continues to do extremely well."

However, indicating the breadth of the coronavirus crisis overshadowing Trump politically and now personally, a viral outbreak continued to sweep through his inner circle.

Top White House aide Stephen Miller confirmed Tuesday that he had tested positive for Covid-19 and was in quarantine.

US media also reported that a military aide responsible for carrying the "nuclear football" -- a briefcase containing information for the president to launch a nuclear attack while traveling -- tested positive for coronavirus over the weekend. The aide had traveled with Trump to New Jersey on Thursday.

There had been speculation, even among some Republicans, that Trump might emerge from hospital chastened or at least with a new tone of empathy.

But on Twitter he returned to one of his oldest lines of argument used to downplay the seriousness of the pandemic, saying it was comparable to the ordinary flu and "we have learned to live with it."

Twitter hid the tweet, saying that it broke the platform's rules on "spreading misleading and potentially harmful information."