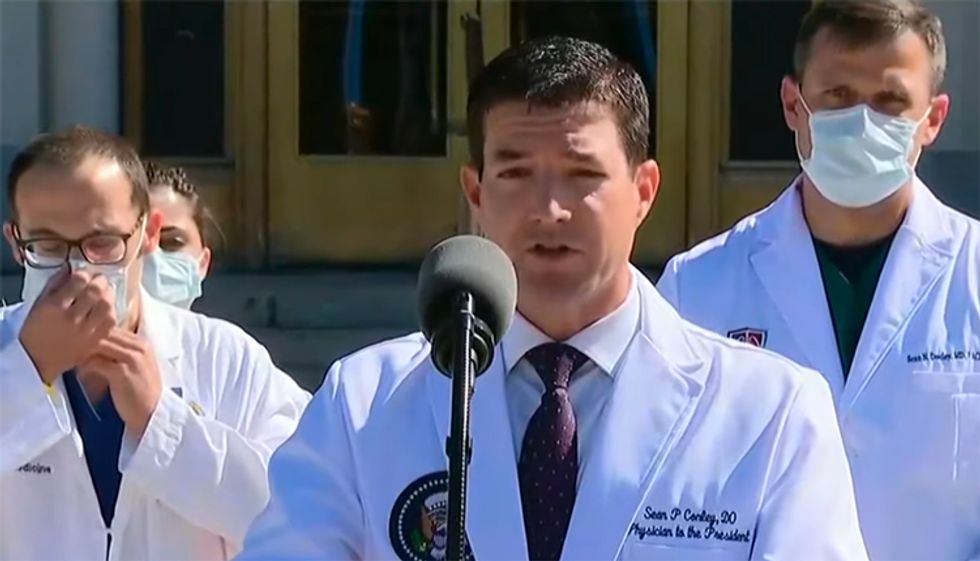 This is not Reality TV. This is reality.

Donald Trump, the most powerful man in the world, has become infected with a deadly virus. He has spent the weekend receiving an emergency medical regimen injecting him with more drugs than an 80s rock star.  These include steroids, widely known for their mood-altering behavior.

Trump has clearly demanded that his doctors lie to the nation and world about his treatment, which they have done. He just ordered up America’s first-ever photo-op motorcade ride-- empirically endangering the health and lives of Secret Service officers-- in a macabre display that made pen pal Kim Jong Un blush. Maybe this is just Trump being Trump, but we truly don’t know that for certain. So, we wait.

As a script, it sounds rather intriguing. In real life, it is terrifying. It’s one thing to have a psychotic narcissist in the White House. It’s another to have him suffering from an unpredictable illness, under the influence of an untested mixture of medications. Worse, no one around Trump seems capable of protecting him from himself, in turn placing the entire human race in jeopardy.

So, the nation turns its lonely eyes to Mike Pence? Or the merry band of miscreants and sycophants in Trump’s inner circle and Cabinet? Good luck with that.

We’re all numbed to 24/7 news cycles in the year 2020 that routinely include two or three breaking news stories in a week that would be the Story of the Year, in any other year. It is seriously hard for people to process the sensory overload.

Perhaps in the next day, Trump will return triumphantly to the White House and things will return to abnormal, but at a level to which Americans are accustomed. Maybe by this time next week, the eerie motorcade thing will have become ancient history as seamlessly as the worst presidential debate in history did, some five long days ago.

In case it doesn’t work out so well, there’s Amendment 25 to the U.S. Constitution, entitled “Presidential Disability and Succession.” Hopefully, the nation will not need to familiarize itself with its language--most notably Section 4 on the involuntary transfer of power--but here it is: https://bit.ly/3ipBwfS.

To understand the gravity of this moment, it’s worth “reading the transcript,” as they say, of the words today of one Dr. Sean Conley, who at least appears in charge--such that it is--of Trump’s treatment as White House physician. Conley, who the Washington Post reports today “this spring confided to workers that he was laboring under intense personal stress in his job as White House physician,” seemed to show as much today.

Conley was confronted about having blatantly misled the public about the severity of Trump’s condition so egregiously that he had been publicly fact-checked--albeit on background--by none other than White House chief of staff Mark Meadows. If you have to get fact-checked by Meadows, you are one lying, dog-faced pony soldier, or worse.

After Conley gave a rosy report Saturday morning that effectively said there was really nothing to see here about Trump’s little bout with the flu, Meadows revealed that the White House had had grave concerns that Conley’s patient was in a heap of trouble when forced to depart to Walter Reed Hospital.

Conley had to admit that he had scandalously failed to reveal--one would think or orders of the commander-in-chief--that his presidential patient had needed supplemental oxygen, at least twice. And that he was being treated with a steroid reserved for severely ill coronavirus patients.

Conley’s unedited words speak for themselves:

“I was trying to reflect the upbeat attitude that the team the president, through the course of illness has had. I didn’t want to give any information that might uh, steer, the course of illness, uh, in another direction and in doing came off, you know. Like we were trying to hide something, which wasn’t necessarily true…the fact of the matter is that he’s doing really well.”

Sorry, but you lost us at the parts about steering the course of illness in another direction--COVID-19 apparently having grown quite sensitive to criticism--and then the accidental-yet-telling reference to how you hadn’t “necessarily” been trying to hide something.

It’s a little hard to believe, in this context, that the American public should take comfort that Trump is “doing really well.” But as badly as the nation needs to rid itself of the worst president in its history, let’s hope that’s the case.

We don’t want to see this man on steroids.