'Trump Heights' a symbol of US shift on Mideast policy 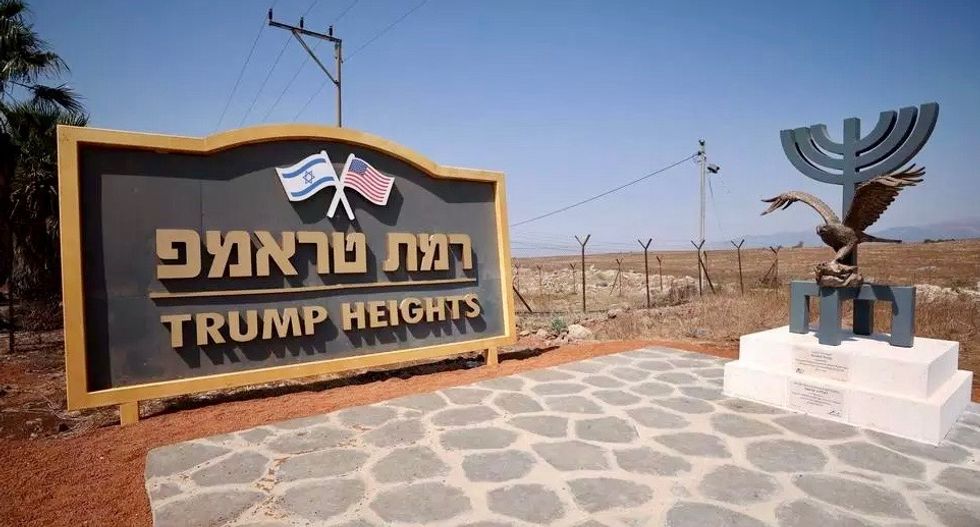 On a dusty plain in the Israeli-occupied Golan Heights, a golden-lettered sign with Israeli and American flags stands before a rusty wire fence as the gateway to "Trump Heights".

But this is no luxury hotel or golf course set up by the property developer turned president.

Instead, it is an Israeli settlement, inaugurated in June 2019 by Prime Minister Benjamin Netanyahu as a celebration to mark US President Donald Trump's recognition of the Golan as Israeli territory.

For residents, it is the most visible legacy Trump has had here.

"There is indeed a big change," said Haim Rokach, head of the Golan regional council, his eyes sparkling at the mention of the US president's name.

"Since Trump's declaration and the decision to build the place, we see a lot of interest from investors."

The Golan Heights, a strategic military zone, was seized by Israel from Syria in the Six-Day War of 1967.

Trump's recognition of Golan was the latest in a string of steps away from global consensus, including recognizing Jerusalem as Israel's capital, and giving Netanyahu the green light to build settlements deemed illegal under international law.

Along with Trump's backing for normalization deals between Israel, the UAE and Bahrain -- lamented by Palestinians as a "stab in the back" -- Trump has changed the dynamics of the dispute between the Jewish state and the Palestinians.

As he battles to stay in the White House for a second term, Trump's strongly pro-Israel stance has further endeared him to evangelical Christians, a powerful voting bloc.

The most ardent evangelical faithful believe the state of Israel was established in line with biblical prophecy and as a prerequisite for the second coming of Christ.

While the Trump Heights sign is new, the settlement is not. It was founded in 1991, following the collapse of the Soviet Union when hundreds of thousands of Jewish people emigrated to Israel.

One group of around 15 families carved out a Jewish settlement here, but the associated farming life is tough. Many struggled to make ends meet, and just five families of Israeli settlers remain, many of them elderly.

Naming the settlement after Trump has given Israeli authorities an opportunity to revive the community, and 20 Jewish families are due to move to the remote spot by the end of November.

Diggers were recently levelling the land ready for their homes, with the aim of 20 families arriving each year for the next decade, said Shai Toni Yeheskel, from the local Golan council.

"For the first time in almost 30 years they have hope," Yeheskel said. "It's going to become one of the centres of the Golan."

Living in run-down houses, the aging residents have steered clear of outsiders who have visited the settlement since it was renamed.

But a group of teenagers live in the community, where they are put through a six-month program ahead of national service.

"There are some lonely elderly residents here," said Ayelet Schwab, 18, from the settlement of Efrat in the occupied West Bank.

"We help them, to carry things they buy, we talk to them, we check on them."

Standing beside her, 18-year-old Adi Hazan said one of their goals was to have more people move in.

"New people will arrive to build this place, they will bring life to it," said Hazan, from Porat in central Israel, as the other teenagers painted stones to decorate a campfire site.

The numbers of settlers are far greater in the occupied West Bank, where around 450,000 Israelis live in settlements -- alongside over 2.8 million Palestinians.

While settlement-building has been Israeli government policy for decades, their approval slowed when US president Barack Obama was in charge.

Israel has approved over 12,000 West Bank homes in 2020, a record high for Jewish building in occupied Palestinian territory, it says.

With a time gap between approval and construction, Reeves says repercussions will be felt over the next three years -- even if Trump is not reelected in November.

"Trump has done irreparable damage to the entire international consensus on... how you can get to peace," Reeves said.

The Palestinians have cut ties with the Trump administration over its pro-Israeli stance, rejecting a US initiative published in January which included plans for Israel to annex swathes of the West Bank.

In Golan, the US policy shift encouraged investors because the land will remain under Israeli control indefinitely.

There may even be an opportunity for a luxury hotel.

"We have plenty of hotels in the Golan, but not enough rooms. Especially exclusive rooms," said the local council's Yeheskel.

"Hopefully we'll have many more hotels here in the near future."

Time will tell if one of those will be a Trump Hotel.