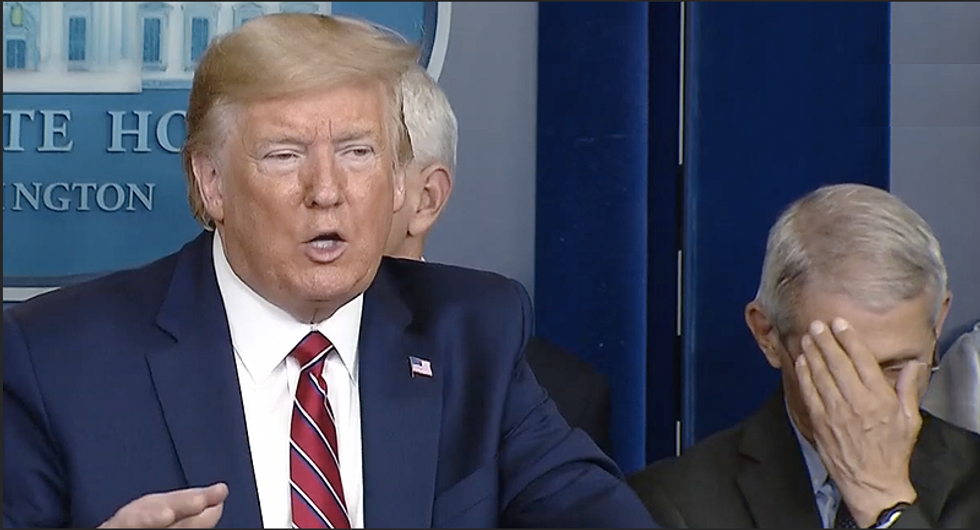 In the wake of recent news that President Trump trashed Dr. Anthony Fauci during a campaign call, the President took another swipe at the top infectious disease expert this Monday.

"Dr.Tony Fauci says we don’t allow him to do television, and yet I saw him last night on @60Minutes, and he seems to get more airtime than anybody since the late, great, Bob Hope. All I ask of Tony is that he make better decisions. He said 'no masks & let China in,'" Trump tweeted, adding, "Also, Bad arm!" in an apparent dig at Fauci's less-than-stellar first pitch at Major League Baseball's opening day.

Expectedly, Twitter had something to say about Trump presuming to lecture a man with Fauci's credentials on his decision making.

It’s totally beside the point but unlike trump, Fauci didn’t make up a lie to get out of throwing the first pitch.
— Adam Parkhomenko (@Adam Parkhomenko)1603131853.0

Trump is throwing a national tantrum. He is a spoiled child. We have enabled Trump like the spoiled brat he has al… https://t.co/6YebQVRh47
— David Stein (@David Stein)1603132178.0

It keeps reminding me of that time in July Fauci threw out a pitch at a Nationals game, Trump got jealous and annou… https://t.co/NKpOmi052T
— Todd Zwillich (@Todd Zwillich)1603131809.0

Trump is right that Fauci outright lied about masks at the beginning. The question is why he listened to him -- the… https://t.co/XVUXXhQH7t
— Tiana Lowe (@Tiana Lowe)1603131955.0