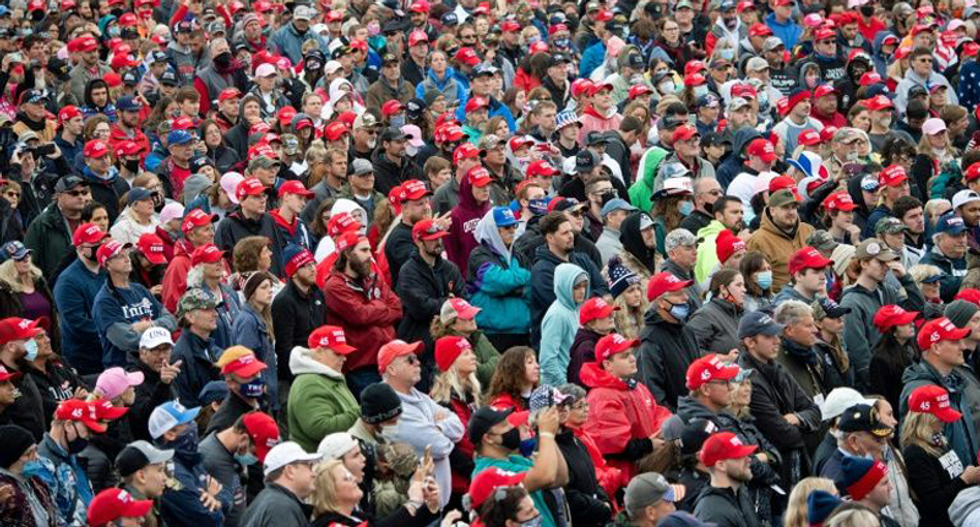 Trump supporters at a campaign rally in Pennsylvania (screengrab).

President Donald Trump on Monday barnstormed Pennsylvania -- a swing state he almost certainly has to win to get reelected -- while his Democratic opponent Joe Biden once more kept a low profile.

With three back-to-back rallies, Trump showed how badly he wants to win the state in eight days, telling large, enthusiastic crowds of supporters to ignore polls showing him lagging there and across other battleground states.

"We get Pennsylvania, we win the whole thing," he said in Allentown, before flying to another rally in Lititz, with a final event set in Martinsburg in the evening.

Trump touted a poll from Rasmussen, which has long gone against the flow of more established polling companies to give him favorable numbers, and said many "hidden Trump voters" would back him in the polling booth on November 3.

The Republican cast his struggling campaign in an optimistic light, predicting that his surprise 2016 victory over apparent frontrunner Hillary Clinton would be repeated.

"The same thing is happening," he said, "a similar result and maybe even a bigger margin."

Trump's message largely ignored the Covid-19 crisis, which is seeing a new surge in infections nationwide, and instead focused on what he said would be a strong economic comeback.

Fixing on Biden's campaign promises to encourage a shift to renewable energies, Trump told each of the rallies in Pennsylvania -- a major natural gas producing area -- that the Democrat would "abolish the entire US oil industry."

"Biden's plan is an economic death sentence for Pennsylvania's energy sector," he said.

He repeatedly insulted Biden, whom he called "sleepy" and unable to cope with foreign leaders who are "100 percent sharp," and delivered his stock litany of exaggerations about what life would look like under a Democratic presidency.

"You will have a depression the likes of which we have never seen outside, perhaps, 1929," he said, predicting that Americans would no longer have air conditioning and that the Democrats would ban cows.

Biden, meanwhile, began the day in his hometown in Delaware, maintaining his record for the most lightly traveled presidential candidate in recent history.

Biden was in Pennsylvania on Saturday and is due to campaign in Florida -- another hugely important swing state -- on Thursday.

But many days he is hunkered down at home doing online video talks or sending allies like popular former president Barack Obama to campaign on his behalf.

By contrast, Trump now has two to three rallies a day, with a plan to ramp up to at least five in the final sprint.

Biden argues that he is sticking to medical guidelines on not spreading the virus during the pandemic, while Trump, who himself was hospitalized this month with the coronavirus, regularly brings together thousands of people without masks.

With a steady lead in the polls, Biden also apparently believes that popular anger over Trump's coronavirus management is powering him to a win, whatever he does or doesn't do.

"No president whose lies and failures have cost 225,000 American lives should keep his job," he tweeted Monday.