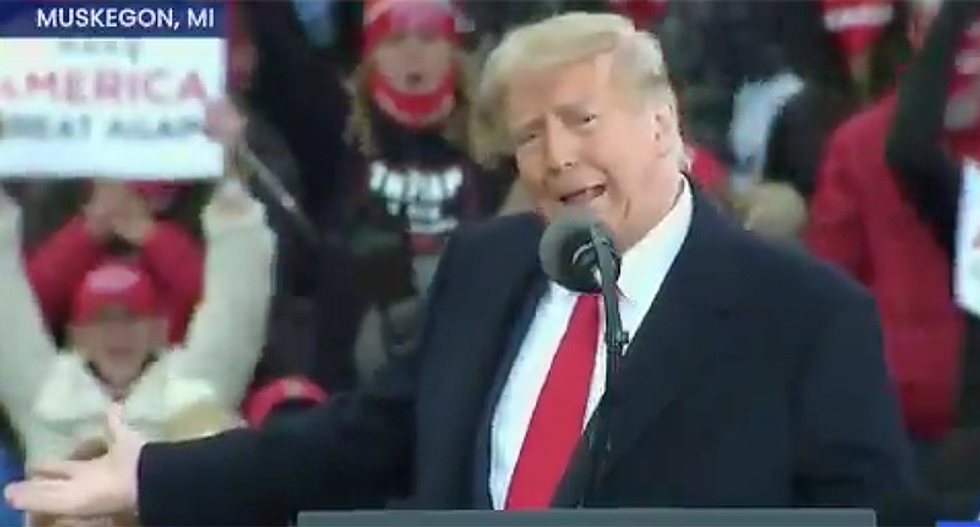 President Donald Trump ticked off several lies in just under 60 seconds while visiting his supporters in Michigan on Saturday.

He told his supporters that the press was predicting an astounding "red wave" in November, a fact that even Fox News disputes, with their polls showing Biden leading nationally in the polls. Attacking them as "the fake news media," Trump said even they were predicting a "red wave" saying that he was very far ahead in the early vote count.

"So, it just came out. We're leading. What's that?" he asked as the crowd cheered. "But let's not talk about it."

He then claimed that he was voted Michigan's "Man of the Year," a claim he has been making since 2016, but the details keep changing.

In 2016, Trump mentioned the unknown award six times during his campaign. After being elected, he kept bragging about it.

"In fact, five or six years before I even thought about running, for whatever reason they named me Man of the Year in Michigan. I said, how come? I didn't even understand it myself, but I was named Man of the Year," Trump told a New Hampshire rally last year.

Saturday, Trump claimed he got "Man of the Year in Michigan" twelve years ago. Snopes still labels the claim "false."

See Trump in the video below:

Trump lies & says the media is predicting a "red wave" during next month's elections. He then lies about leading in… https://t.co/PTWqovJR5E
— Aaron Rupar (@Aaron Rupar)1602970317.0