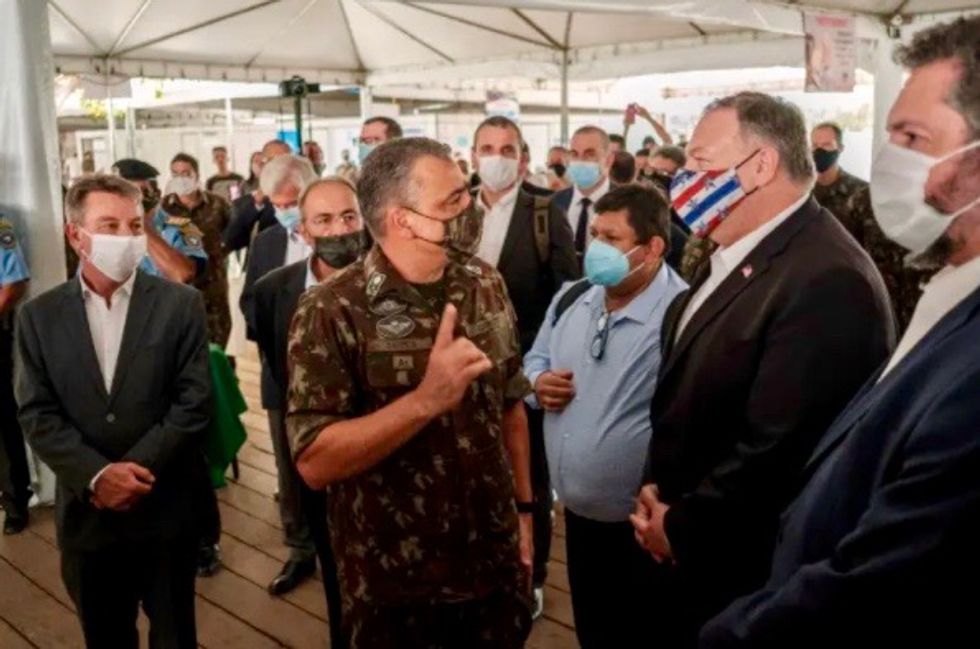 Secretary of State Mike Pompeo, wearing a mask, tours a processing center for Venezuelan migrants on a September 2020 visit to the Brazilian border town of Boa Vista (AFP)

President Donald Trump's administration said late Wednesday the United States will admit a record low of no more than 15,000 refugees over the coming year despite surging global displacement, stepping up its hard line one month before elections.

The State Department announced the number just half an hour before the October 1 start of the 2021 fiscal year, narrowly meeting a deadline set by US law following criticism from lawmakers.

The 15,000 figure -- the maximum who can be admitted over the next 12 months barring a change in administration -- is a further cut from 18,000 last year and down dramatically from more than 100,000 under previous president Barack Obama.

Trump, who has campaigned on fierce denunciations of immigration, already suspended refugee admissions entirely for several months this year citing the Covid-19 pandemic.

Explaining the proposed new numbers, which need formal White House approval, the State Department said the United States wanted to help displaced people "as close to their homes as possible" until they can go back.

"By focusing on ending the conflicts that drive displacement in the first place, and by providing overseas humanitarian assistance to protect and assist displaced people, we can prevent the destabilizing effects of such displacement on affected countries and their neighbors," a statement said.

Refugee advocates had pleaded with the Trump administration to raise admissions in the face of global conflicts and fresh instability due to the pandemic.

Nearly 80 million people around the world are displaced, double the number a decade ago, according to the UN refugee agency.

On September 8, a fire ravaged a bursting-at-the-seams camp that had been attempting to house 20,000 people on the Greek island of Lesbos, a key entry point to the European Union.

Trump's Democratic rival in November 3 elections, Joe Biden, has pledged to raise the refugee cap to 125,000, saying that welcoming the persecuted is in line with US values.

The Trump campaign has run advertisements highlighting Biden's stance on refugees, saying he is "weak" and would bring in people from "dangerous" places.

Asked about impending cuts to the refugee quota, Secretary of State Mike Pompeo said Tuesday that there was "no more generous country" than the United States in providing humanitarian assistance.

"You suggest somehow that we didn't do our fair share when it comes to refugees – nothing could be further from the truth," Pompeo said in response to a question at a news conference in Rome.

"We've taken more refugees inside the United States than any other nation over the course of the last 20 years," Pompeo said.

The United States for years took in more refugees than the rest of the world combined. But last year Canada topped the US as the leader by resettling more than 30,000 refugees, according to UN data.

Democratic lawmakers earlier feared that the Trump administration would not comply with the requirement to provide a refugee number by October 1, making it impossible to admit people.

"We need to restore the refugee program and our moral authority around the world," said Representative Zoe Lofgren, who heads a House subcommittee in charge of immigration.

Trump launched his 2016 campaign on vows to keep out Mexican and Muslim immigrants, accusing them of violence, and took heat after a debate Tuesday with Biden for equivocating on condemning white supremacists.

Pompeo last week on a visit thanked Colombia and Brazil for taking in Venezuelans and toured a migrant processing center in a Brazilian border town.

The State Department statement on the refugee cap pointed to Venezuela as a case where the United States was focusing on "diplomatic solutions."

The Trump administration has been trying unsuccessfully since January 2019 to topple Venezuela's leftist leader, Nicolas Maduro.