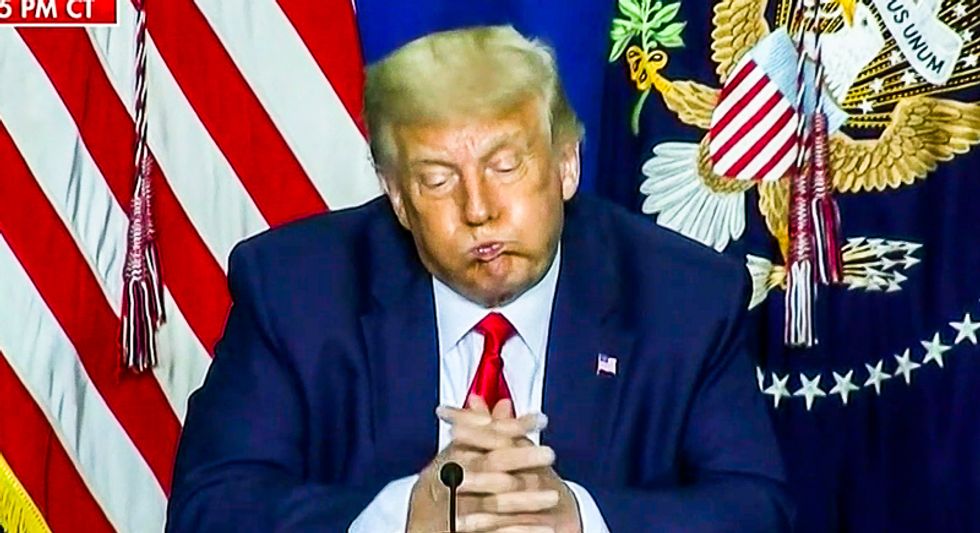 President Donald Trump and his supporters were hoping that a deal with the Taiwanese electronics company Foxconn would create 13,000 new manufacturing jobs in Wisconsin, guaranteeing that he would win the state this election year and convince voters that he made good on his promise to bring new jobs to the Rust Belt. But the Foxconn deal, journalist Josh Dzieza emphasizes in an article for The Verge, has been a flop — and the LCD plant that was promised never materialized. Instead of a manufacturing renaissance, all Wisconsin got were "empty promises and empty buildings," according to The Verge.

"Hopes were high among the employees who joined Foxconn's Wisconsin project in the summer of 2018," Dzieza explains. "In June, President Donald Trump had broken ground on an LCD factory he called 'the eighth wonder of the world.' The scale of the promise was indeed enormous: a $10 billion investment from the Taiwanese electronics giant, a 20 million-square-foot manufacturing complex, and, most importantly, 13,000 jobs."

In a press release touting the factor in 2017, the White House employed the hard sell.

"This $10 billion investment will create thousands of new American jobs," it claimed. "The construction of this facility represents a major advancement in regaining America's place in advanced electronics manufacturing."

And the White House didn't hesitate to criticize others who were critical of these grandiose claims.

"While pundits have said for years that electronics manufacturing in the U.S. was a lost cause, the policies and focus of President Trump's administration are producing results that show America can eventually re-emerge as a dominate country in advanced manufacturing," it said. "The new Foxconn plant has the potential to be one of the largest non-energy manufacturing job creators in modern U.S. history, and powerfully illustrates that nothing is beyond America's capabilities."

These words now ring quite hollow.

According to Dzieza, the building in Wisconsin that Foxconn "calls an LCD factory" is "about 1/20th the size of the original plan" and "is little more than an empty shell." And in September, Dzieza adds, Foxconn "received a permit to change its intended use from manufacturing to storage."

The Foxconn debacle, Dzieza laments, not only failed to create the 13,000 jobs that were promised, but also, had a high cost in Wisconsin.

"State and local governments spent at least $400 million, largely on land and infrastructure Foxconn will likely never need," Dzieza observes. "Residents were pushed from their homes under threat of eminent domain, and dozens of houses bulldozed to clear property Foxconn doesn't know what to do with."

In 2018, former Wisconsin Gov. Scott Walker — a Republican Trump ally who was voted out of office in the 2018 midterms — exalted the Foxconn project as "Wisconn Valley" — that is, a Wisconsin equivalent of Silicon Valley. But Walker's talk of "Wisconn" didn't help him in the gubernatorial election: that year, Walker lost to Democrat Tony Evers, now Wisconsin's governor.

Dzieza notes, "Rather than the 1040 people Foxconn intended to hire by the end of 2018, per its contract with the state — or even the 260 needed in order to receive subsidies — an audit found the company had managed to hire only 113."

An engineer who was supposed to work at "Wisconn Valley," interviewed on condition of anonymity, told The Verge, "The most common misunderstanding with Foxconn is people here thought Foxconn had a strategy and a business plan when they were coming into Wisconsin. They did not. They had no plans at all."