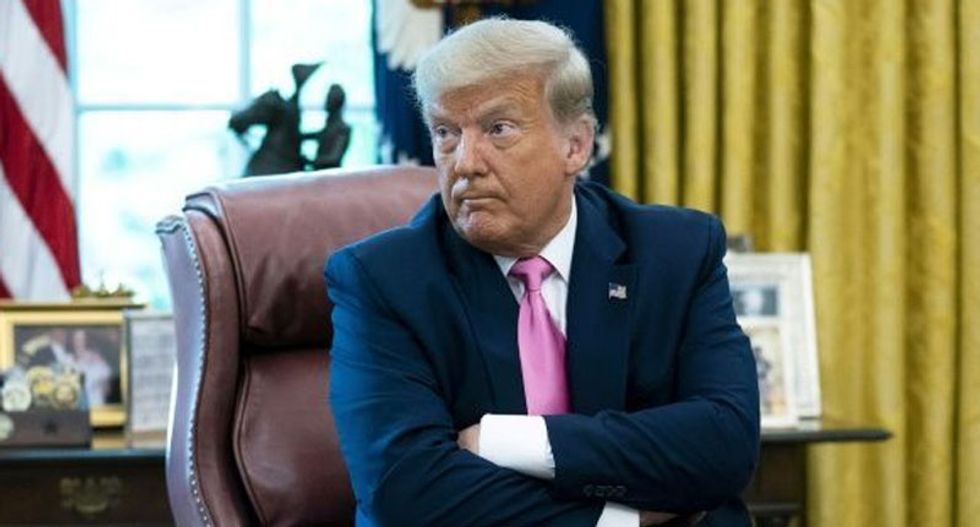 President Donald Trump experienced only "mild symptoms" Friday after contracting Covid-19, a top aide said, but the Republican's already struggling reelection campaign was grounded, throwing the contest into yet more turmoil a month before polling day.

Briefing reporters at the White House, Trump's chief of staff Mark Meadows said the president, 74, had few symptoms while in quarantine in his residence and was in "good spirits" and "very energetic."

"The American people can rest assured that we have a president that is not only on the job, will remain on the job, and I'm optimistic that he'll have a very quick and speedy recovery," Meadows said.

However, Trump's disappearance from the campaign trail threw a giant new question mark over the fate of his bid for a second term, which opinion polls show him on course to lose to Democrat Joe Biden.

The overriding theme of Biden's campaign has been that Trump's frequent downplaying of the pandemic and mixed messaging on mask wearing are to blame for the scale of the crisis in the United States, where more than 200,000 people have died.

Biden, who stood in close proximity to Trump for 90 minutes during their ill-tempered first debate on Tuesday in Cleveland, announced that he and his wife Jill had taken tests and were negative.

Biden, 77, said they would "pray for the health and safety of the president and his family" but he added a pointed message for the man who has mocked him repeatedly for his rigorous use of masks.

"I hope this serves as a reminder: wear a mask, keep social distance, and wash your hands," Biden said.

Underlining the contrast between the state of the two campaigns, Biden went ahead with his previously scheduled campaign trip to swing state Michigan.

Trump -- who has repeatedly cast doubt on the seriousness of the pandemic -- first announced in an overnight tweet that he and First Lady Melania Trump, 50, had tested positive and were going into quarantine.

The shock announcement triggered a freeze on his plans to barnstorm the country in an attempt to catch up with Biden before the November 3 election.

A rally planned for Florida on Friday was cancelled, as was a rally in Wisconsin on Saturday and others in western states like Arizona next week.

"All previously announced campaign events involving the president's participation are in the process of being moved to virtual events or are being temporarily postponed," the Trump campaign said in a statement.

Even the second Trump-Biden debate, scheduled for October 15, is now in some doubt.

Despite White House assurances that Trump continued to work, he did not hold the one item that had been left on his public agenda Friday: a pre-planned phone call to discuss what was billed as "Covid-19 support to vulnerable seniors."

An official who asked not to be identified said "you shouldn't read too much into a slight schedule change" and noted that Trump had spoken by phone with Republican leaders.

The White House would not say if Trump would soon be addressing the nation.

Press secretary Kayleigh McEnany only told Fox News: "You'll be seeing and hearing from the president as he moves forward."

"He wants to talk to the American people" but staff are "having to hold him back a little" and "make sure that he takes it easy," she said.

News of Trump's infection came right after one of his closest advisors, Hope Hicks, tested positive -- sparking fears of a cluster of cases emanating from the heart of the White House.

Trump met with dozens of people through the week and reportedly went to a fundraiser in New Jersey after it was known Hicks had contracted the virus.

The White House said it was carrying out contact tracing, while Melania Trump's spokeswoman said the couple's 14-year-old son Barron had tested negative.

Vice President Mike Pence, Treasury Secretary Steven Mnuchin and Secretary of State Mike Pompeo all let it be known they had tested negative, and the White House said Supreme Court nominee Amy Coney Barrett was a negative too.

But Republican Party chairwoman Ronna McDaniel, who was last with Trump on September 25, tested positive earlier this week, according to US media reports.

Technically obese and in his 70s, Trump is in a higher-risk category.

Doctor Daniel Griffin, an infectious disease specialist in the New York area, told AFP Trump had an estimated 20 percent chance of developing severe disease requiring oxygenation, in light of his age and weight.