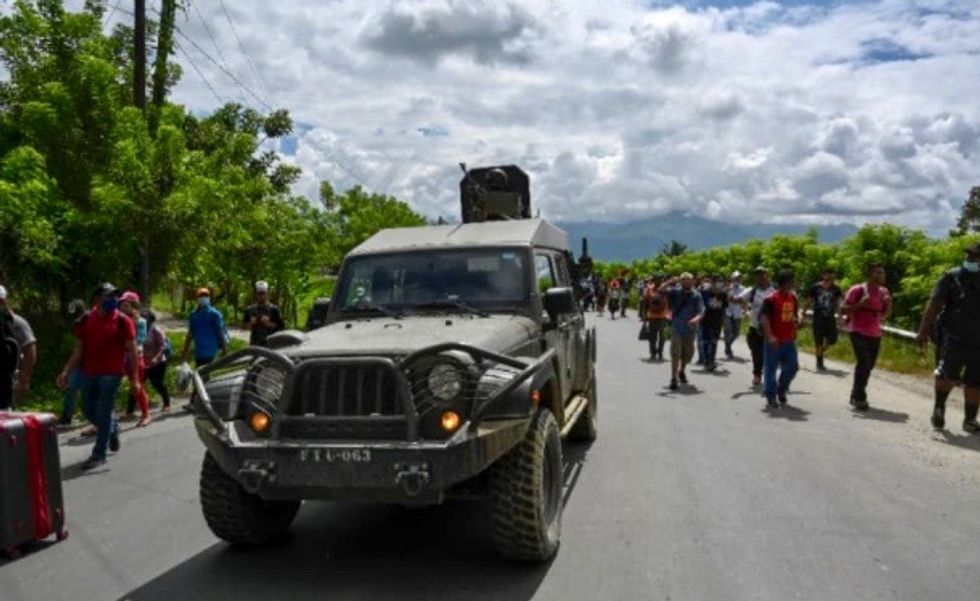 Honduran migrants, part of a caravan heading to the US, walk alongside an army truck in Entre Rios, Guatemala, after crossing the border on October 1

Thousands of mostly Honduran migrants bound for the United States surged across the border into Guatemala on Thursday.

Carrying backpacks and plastic bags, the migrants pushed past two lines of Guatemalan soldiers at the Entre Rios border crossing and continued northwards -- defying the risks and restrictions linked to the coronavirus pandemic.

The soldiers handed out water to passing migrants, some of whom applauded the troops for allowing them to pass.

Guatemalan Migration Institute officials said some 3,000 people had crossed the border without submitting to a Covid-19 test, required for foreigners entering the country.

Many were not wearing masks against the spread of infection.

Guatemala opened its borders last week after a six-month closure to prevent the spread of the virus, which has hit Central American countries hard.

The migrants had set off on Wednesday night from Honduras' second city San Pedro Sula.

Honduran Red Cross officials said 1,200 people left in a first group, joined a few hours later by around 2,000 more, walking north to the border with Guatemala.

Some of the migrants said they recognized the risks of catching the coronavirus while on the move, but were prepared to take the risk to escape from high levels of poverty and violence in Honduras.

"We're not thinking about the pandemic, it's the last thing on our minds," 20-year-old Jefrey Amaya told AFP, part of a group of young people from El Negrito, in Honduras' Yoro department.

Amaya said he had joined the caravan after seeing a message on social media.

"We are going in search of the American dream, no one will stop us. Either we die here from Covid-19 or we die of hunger. Governments are doing nothing to create jobs," another migrant, 27-year-old Miguel Artiga, told AFP.

The vast majority of the migrants on the move are young men. Few women and children were seen.