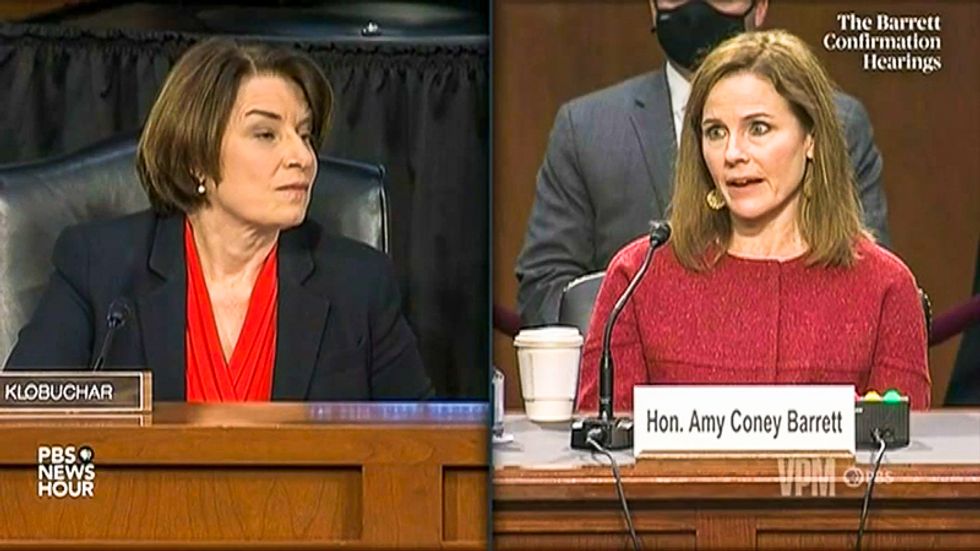 Supreme Court nominee Amy Coney Barrett on Tuesday declined to say whether voter intimidation is illegal despite the fact that it is outlawed by federal statutes.

During a confirmation hearing before the Senate Judiciary Committee, Sen. Amy Klobuchar (D-MN) noted that many states "have policies that make it harder for people to vote."

"That is what the stakes are," Klobuchar explained. "And that is why not having Justice Ginsburg on the court right now is so frightening to so many Americans out there and that is why we are asking you these questions about voting."

Klobuchar pointed to news that a contractor in Minnesota has begun recruiting poll watchers with military experience.

"This was clear voter intimidation," the senator said. "Similar efforts are going on around the country, solicited by President Trump's false claims of massive voter fraud."

"Judge Barrett, under federal law, is it illegal to intimidate voters at the polls?" Klobuchar asked.

"I can't characterize the facts in a hypothetical situation," Barrett replied. "And I can't apply the law to a hypothetical set of facts. I can only decide cases as they come to me."

"I'll make it easier," Klobuchar interrupted before pointing to 18 U.S.C. § 594 in federal law, which applies to anyone who "intimidates, threatens, coerces, or attempts to intimidate, threaten, or coerce, any other person for the purpose of interfering with the right of such other person to vote or to vote."

"This is a law that has been on the books for decades," the senator said. "Do you think a reasonable person would feel intimidated by the presence of armed civilian groups at the polls?"

Barrett, however, refused to answer on the grounds that it could seen as a legal opinion.

"It's not something that it's appropriate for me to comment on," she said.