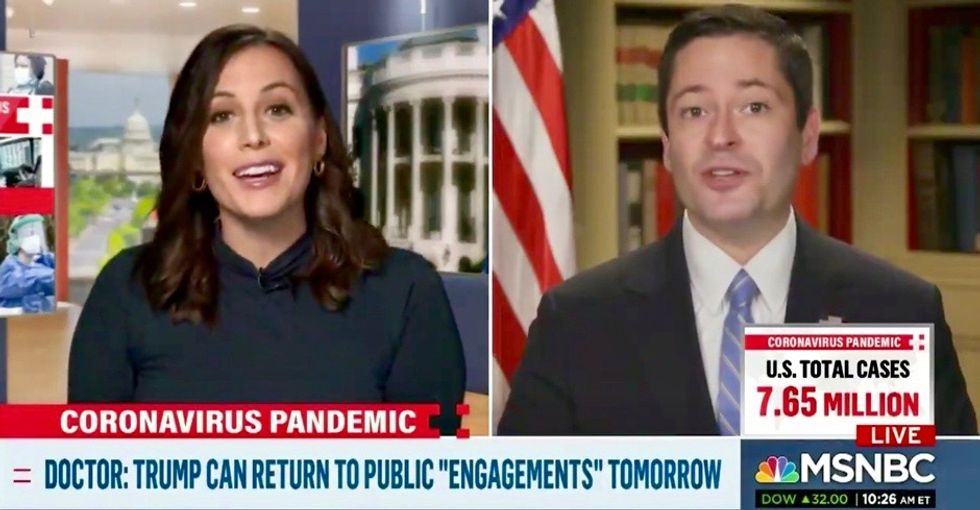 MSNBC anchor Hallie Jackson cut short an interview after White House deputy press secretary Brian Morgenstern refused – at least six times – to reveal when President Donald Trump's last negative coronavirus test was, or even if the President has tested negative since announcing he tested positive one week ago, but tried to turn the interview into an attack on Speaker Nancy Pelosi.

President Donald Trump says he is planning on returning to the campaign trail by holding a rally in Florida on Saturday and in Pennsylvania on Sunday.

Morgenstern refused to answer the question Friday morning, and even falsely claimed there is no "public health value" in telling the American people if the President is still infectious and shedding virus, potentially at those rallies Trump teased he will hold this weekend.

There is currently no evidence Trump has tested negative since his diagnosis. CDC guidelines require three consecutive negative tests before coronavirus patients are deemed safe to break quarantine.

Citing Trump's "privacy" Morgenstern claimed "the president doesn't check all of his HIPAA rights at the door just when he becomes president."

"You just said a couple of minutes ago," Jackson replied, "that you would share the results of this PCR test today if you get it and if that happens so what's the difference, why not be more transparent with people about this last negative test you know there is a public health reason for this. And it impacts the people who were potentially exposed to the virus before the President was diagnosed, why not be transparent about that specific very specific piece of information?"

"It's not something that has the public health value that the other information we're releasing does," Morgenstern claimed, falsely. Americans have the right to know if their president is contagious with a potentially lethal virus for which there is no medical cure or vaccine.

Morgenstern, claiming Trump was "socially distant," lied about the president's last known outing, when he attended a New Jersey fundraiser right before self-quarantining, but after he knew Hope Hicks had tested positive for coronavirus.

"Brian! We have video! That's not true. We've seen video," she replied.

After Morgenstern refused to answer even more questions and tried to change the topic of the conversation to Speaker Nancy Pelosi's new 25th Amendment bill, Jackson cut the interview – but not without getting the last word.

"Nope. All right, Brian, thank you very much," she declared. "Critical piece of information: one of your colleagues just yesterday told me that it was a fair question that you would try to give us the information on that was hoping that you'd have that for us today. I certainly hope that you'll come back with that. Brian Morgenstern it's great to have you on the show. Thank you very much. Over to Capitol Hill now."