WATCH: MSNBC's Ruhle smacks down Trump advisor for claiming the stock market and the economy ‘are the same’ 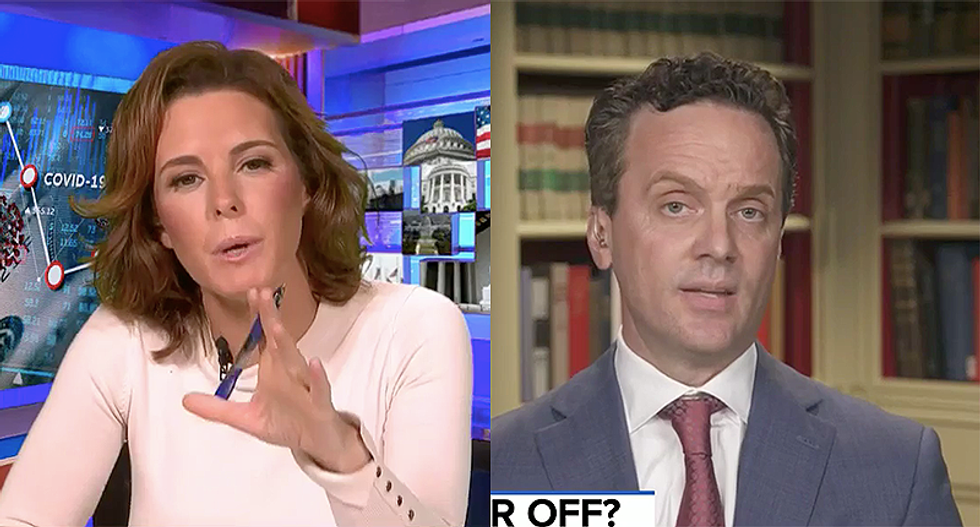 Joseph Lavorgna is serving as President Donald Trump's National Economic Council chief economist and when faced with economic problems most Americans are facing, he tried to say all was well due to the stock market. MSNBC host Stephanie Ruhle wasn't having it.

It first began when Ruhle questioned how the GOP tax cut in 2017 could be considered something that benefited the middle class.

"I'm not saying it. That's what the data are showing," claimed Lavorgna. "Last year, Stephanie, it's not 1,000 -- real median family income went up $4400 to $69,000. That's the biggest ever and the gains, as I said, when you look at the data, this shows it was at the lower and middle ends. It was the lower end and that was a result of the very tight labor market and the president's policies that got us that tight labor market."

"Not to get too much in the weeds, but the Census Bureau redesigned its income questions in 2014 and its processing system in 2018, making comparisons to previous years difficult," said the Post. "The bureau says that when adjustments are made to account for the differences, 2018′s annual median household income would be lower than 2007, 2000 and 1999, after adjusting for inflation."

Lavorgna quipped at one point that the markets seem to be thinking they're doing a good job.

"Yes, well, the markets are, obviously, not the same thing as the economy," said Ruhle. Lavorgna began talking over her trying to claim the opposite.

"I want to -- one second, Stephanie. Hold on. I want to say one thing," he struggled.

"If you look at the earnings estimates, they are following the trajectory of GDP growth. That's mistaken -- that's not true. the economy and the markets are one and the same at the moment," he claimed.

"No, the economy and the markets are absolutely not one and the same," Ruhle stopped him. "In fact, if you look at the --"

He stepped in again trying to talk over her, saying the earnings estimations somehow equated to the economy.

Economics reporter Matt Phillips with the New York Times explained in May as Americans were losing their jobs and thousands were dying, the stock market was stable while the economy was struggling.

"But the pandemic has also highlighted a deeper trend. For decades, the market has been growing increasingly detached from the mainstream of American life, mirroring broad changes in the economy.

“Wall Street has very little to do with Main Street,” Phillips cited Joachim Klement, a market analyst at Liberum Capital in London. “And less and less so.”

Writing for Forbes, economist Dr. Robert Barone explained, "the best gauge of economic health is employment, and, on that front, the news is not good. New unemployment claims continue at well over +1.2 million/week; the pre-virus norm is +200K. When all claims are considered, the total is more than 25 million, a real unemployment rate in excess of 15%."

The average income is high doesn't help people who aren't getting any income at all.

Ruhle said the two would have to "agree to disagree" with his assessment that the economy was the same as the stock market.