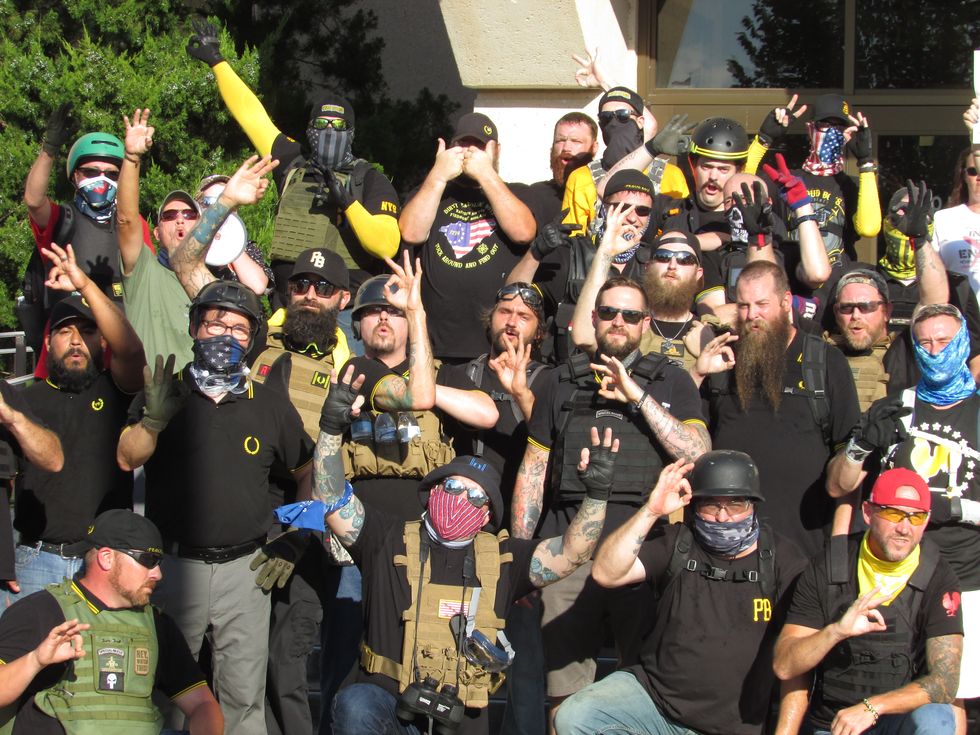 During his heated debate with former Vice President Joe Biden on Tuesday night, September 29, President Donald Trump disturbed many of his critics when he expressed his solidarity with the Proud Boys — a racist far-right group with a history of violence. History repeats itself, and journalist Amy S. Rosenberg — in an article published in the Philadelphia Inquirer on October 5 — warns that some historians see troubling parallels between the United States in 2020 and countries that sunk into fascism in the past.

For her article, Rosenberg interviewed some scholars and historians in Philadelphia and nearby southern New Jersey. One of them is Anne Berg, who grew up in Germany and now teaches history at the University of Pennsylvania.

Rosenberg writes that although Berg's parents were "basically hippies," her grandparents "were Nazis" — and Berg told the Inquirer, "To expect that things are going to return to normal is irresponsible. People need to be aware of the risks we are facing right now."

Berg noted that in 2017 — the year in which Trump was sworn in as president — she warned her students at Penn against "catastrophizing." But now, she is sounding the alarm about what she warns is a "rapid descent toward fascism" in the United States.

Rosenberg writes, "Is American Democracy at risk? After Tuesday's volatile debate, with a belligerent President Donald Trump signaling paramilitary white supremacist groups to 'stand by,' repeatedly calling the voting process into question, and raising the specter of post-election violence, lots of Americans may have joined a growing chorus of academics and others who have sounded the alarm for, in some cases, years."

Nikol Alexander-Floyd, who teaches political science at Rutgers University in New Jersey, told the Inquirer, "We have to understand: we are not immune from what has happened in other parts of the world and other time periods. This is what a potential coup looks like."

Eddie S. Glaude, Jr., chairman of the African-American studies department at Princeton University in New Jersey and a frequent guest on MSNBC's "Morning Joe," told the Inquirer, "We're on a knife's edge. The republic is in serious jeopardy."

For a sobering depiction of the type of creeping fascism that Bern, Alexander-Floyd and Glaude are warning about, an excellent movie to watch is the 1972 film adaption of the musical "Cabaret" — which takes place in Berlin in 1931 near the end of the Weimer Republic. The film, starring Liza Minnelli, is fiction, but it's a realistic, frighteningly accurate depiction of what was happening Germany in 1931 — when Adolf Hitler hadn't yet come to power and set up concentration camps, but Nazis were becoming increasingly brazen in their anti-Semitism.

In 2020, even some of critics of Trump and the Proud Boys are arguing that it is alarmist to say the U.S. is slipping into fascism. But in "Cabaret," one of the characters who was critical of Nazis believed it was alarmist to think that Hitler would actually come to power — even when Jews were being brutally beaten by Nazis in the streets of Berlin and the attacks were getting worse and worse.

Rosenberg explains, "Berg, the (scholar on Nazism), says she is reminded of early-1930s Germany, in the waning days of the Weimar Republic, when both ends of the political spectrum, fascists and communists, lost faith in the democratic system and urged that it be dismantled."

Berg told the Inquirer, "These are warning signs for democratic fragility. Once we agree the democracy is under threat and the institutions no longer work for us, we don't feel the need to defend them."