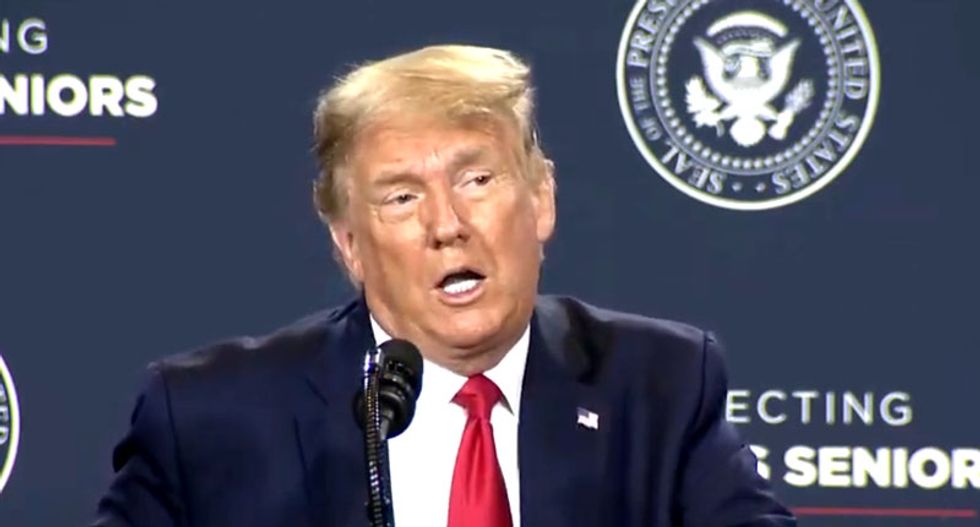 More than 220,000 people in the U.S. have been killed by the coronavirus on his watch and millions have lost their livelihoods due to the ongoing economic collapse, but President Donald Trump on Wednesday said there is "not much" he would do differently if given the chance, making clear that he has not learned from his disastrous mishandling of the pandemic and is unwilling to change course.

"Look, it's all over the world," Trump, who has admitted to downplaying the severity of the pandemic from the start, said during a Sinclair town hall with Eric Bolling. "You have a lot of great leaders, a lot of smart people. It's all over the world. It came out of China. China should have stopped it."

The president's remarks came as Covid-19 cases continued to surge across the U.S., which reported 60,000 new infections on Tuesday alone—the second consecutive day the number of new cases ticked up.

"Unfortunately, we're seeing a distressing trend here in the United States, with Covid-19 cases increasing in nearly 75% of the country," Jay Butler, deputy director for infectious diseases at the CDC, told reporters Wednesday.

"Now 225,000 dead Americans, virus spread raging, millions out of work, an economy spiraling down, and Trump today says he'd do the same things all over again," Rep. Bill Pascrell Jr. (D-N.J.) tweeted in response to the president's remarks. "The Republican Party is unfit to govern and a threat to your life."

Dr. Leana Wen, an emergency physician and visiting professor of health policy and management at the George Washington University's Milken School of Public Health, said she is stunned by Trump's refusal to learn from his numerous failings in confronting a pandemic that has now infected more than 8.3 million people in the U.S.

"That's shocking," Wen said during a CNN appearance late Wednesday. "I think all of us should be able to look back and say we've learned a lot along the way. We didn't know in the beginning, for example, about how important testing is from the get-go, and we missed opportunities. We missed opportunities when it came to mask wearing, because we didn't know in the beginning about asymptomatic and aerosol spread. We know all of that know."

At a crowded in-person rally in Gastonia, North Carolina on Wednesday evening—the latest in a string of campaign events the president has held nationwide despite the risk of spreading Covid-19—Trump once again offered a rosy depiction of the state of the pandemic in the U.S. and criticized the media for covering the virus.

CNN reporter Daniel Dale noted on Twitter that people don't like when the president says the pandemic is "rounding the corner" because "it's not remotely true."

"He then says cases are up because testing is up, which is also not true," Dale pointed out.