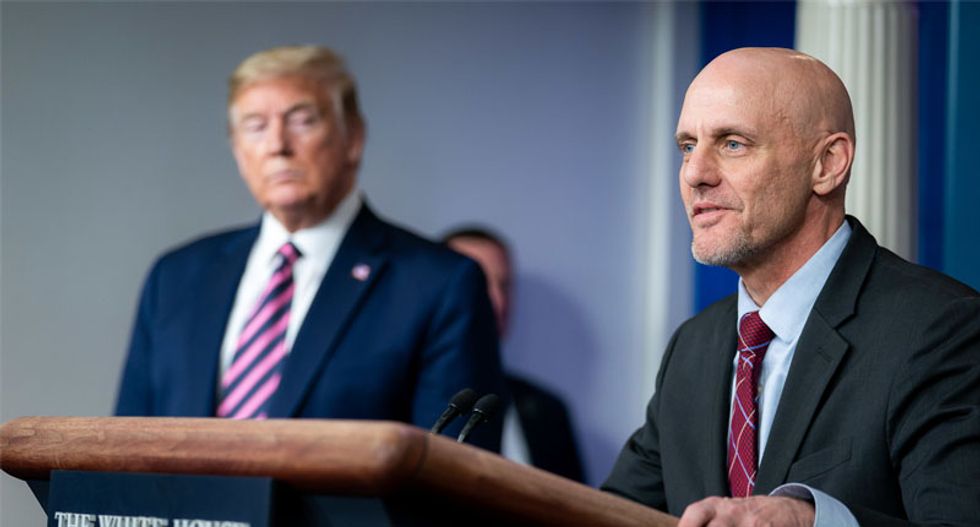 It’s understood the president has not done nearly enough to combat the spread of the new coronavirus. It’s understood he’s gotten in the way of states trying to protect residents. What’s not understood, however, is the United States government, under Donald Trump’s leadership, seems to be conducting a science experiment on the American people without telling us, one informed by ideology, not medicine. All things being equal, a second term for the president will not only coincide with a permanent pandemic; it will cause hundreds of thousands more people to die.

On Monday, the Post ran an investigation finding the administration surrendered to a disease that has killed so far more than 225,000 Americans and infected nearly 8.5 million more, according to Worldometer. Indeed, the White House has changed tacks under Scott Atlas, the radiologist turned White House pandemic advisor. Appealing to Trump’s desire to look like he’s working without actually doing any work, Atlas has, according to the Post, “advocated allowing infections to spread naturally among most of the population while protecting the most vulnerable and those in nursing homes until the United States reaches herd immunity, which experts say would cause excess deaths, according to three current and former senior administration officials.”

After consolidating power with the help of Trump son-in-law Jared Kushner and Vice President Mike Pence, Atlas has undermined the authority of Anthony Fauci, head of the National Institute of Allergy and Infectious Diseases. (The president, subsequently, has been growing increasingly critical of Fauci.) Masks and social distancing don’t work, Atlas said in public. All state and local restrictions should be lifted. Atlas has, moreover, blocked money appropriated by the US Congress for testing. He has sandbagged the government’s effort to monitor the disease’s spread. His goal appears to be quite clear: allowing about 60-70 percent of the population to be infected, resulting in, according to one expert, “hundreds of thousands of excess deaths.” (The current percentage of recovered people with covid antibodies is around 10 percent.)

It happens this goal is shared by signatories of the so-called Great Barrington Declaration, “a scientific treatise that calls for allowing the coronavirus to spread naturally in order to achieve herd immunity,” according to the Times. The statement arose from a gathering held in Great Barrington, Mass., hosted “by the American Institute for Economic Research, a think tank dedicated to free-market principles that partners with the Charles Koch Institute, founded by the billionaire industrialist to provide support to libertarian-leaning causes and organizations.” Jay Bhattacharya is a signatory. He’s also Atlas’ colleague at Stanford. During the spring, they bonded over “shared concern that lockdowns were creating economic and societal devastation.”

Atlas denied advocating the Great Barrington Declaration, but it nonetheless lines up with what he’s doing as the White House pandemic advisor. He nonetheless arranged for a meeting with US Secretary of Health and Human Services Alex Azar. “On Oct. 5, the day after the declaration was made public, the three authors—Dr. Bhattacharya, Sunetra Gupta of Oxford University and Martin Kulldorff of Harvard—arrived in Washington at the invitation of Dr. Atlas” to meet with Azar, according to the Times, Azar later Tweeted: “We heard strong reinforcement of the Trump Administration’s strategy of aggressively protecting the vulnerable while opening schools and the workplace.” (The “declaration” calls for protections only for the sick and elderly.)

I say “it happens” these things line up, but it’s no accident. Two doctors—one now inside of the Trump administration who is echoing another on the outside—say they are deeply concerned about “economic and societal devastation” while at the same time being in league with Charles Koch and his political network, which birthed the so-called Tea Party. A decade ago, they fought and nearly defeated expanded health coverage in the form of Obamacare on grounds that it threatened “economic freedom.” This time, they aren’t fighting public policy. They are fighting science itself. They are fighting in order to prove their belief that the absence of government is liberty, that the road to serfdom is paved with “big government” intentions. They will prove they’re right even if that means duping the American people into being unknowing guinea pigs, even if that means the possibility of “hundreds of thousands of excess deaths.”

Charles Koch is universally accepted among respectable white people as having views consistent with democratic politics. That was always dangerously wrong. I hope the pandemic makes clear the “economic freedom” of the kind Koch espouses—as do Scott Atlas and Jay Bhattacharya, evidently—is inherently at odds with the diverse interests of a democratic community. Democracy is not a goal. It’s an obstacle to achieving one’s goal, which includes tightening one’s grip on the government while appearing to champion liberty. A pandemic of this size requires a massive government response, which requires a government on the side of normal people and the common good. The only way Charles Koch is going to give up that kind of power is over his dead body.