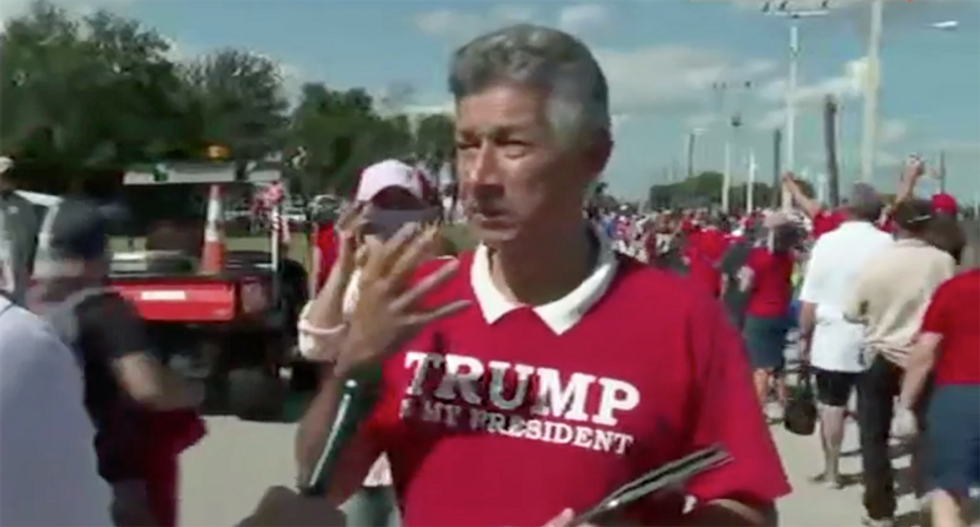 Trump supporter at a rally in Sanford, Florida (screengrab).

President Donald J. Trump spoke for about an hour at a campaign rally Monday night in Florida and did so without a mask. In a segment on his talk show Anderson Cooper 360, Cooper talked with reporter Gary Tuckman who was on the scene.

"If you thought if people would be more careful after hearing that Donald Trump had coronavirus and there was a superspreader event at the White House, you would be incorrect," Tuckman said. "Hundreds and hundreds of people lined up outside in the bright sun for hours here in Sandford, Fla. There was no social distancing, and it looks like about 90% of people did not have masks. Everyone had their temperatures checked and they were given hand sanitizer  - they were also given masks - but there was no mandate to wear them. Most of those masks were put in pockets or purses and never came out again. We spoke to a lot of people who decided not to wear masks and we heard various explanations."

When asked, "Why not just put on a mask?" another Trump supporter said, "No, a mask can actually do more harm to individuals," saying that "people can faint when there's too much carbon dioxide going back into their system."

Tuckman asked if he thought people were just "dropping dead" all over the country because they were wearing masks. To which the man replied, "Enough people are getting ill because they're wearing a mask, so, yeah. Common sense."

Another Trump supporter responded to Tuckman, "I don't care if I do [get sick] because I know I'm not gonna die from it."

Additional explanations are in the video below.