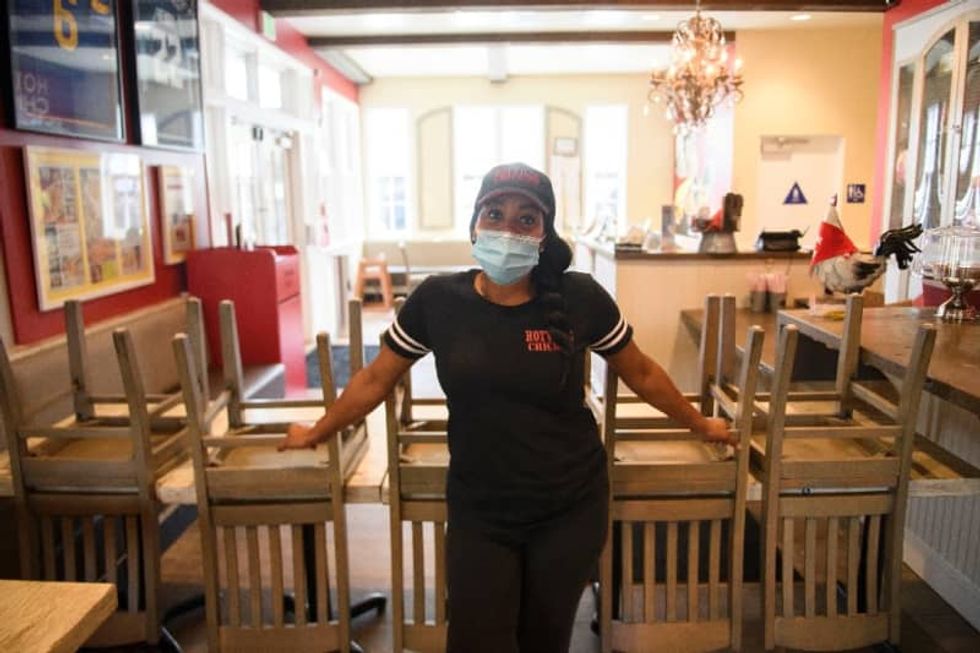 It's been a rough year for Black-owned small businesses in the United States, and the latest surge in coronavirus cases suggests a festive season without much celebration.

"Black Friday" normally kicks off the holiday shopping season the morning after Thanksgiving. But rising coronavirus cases have prompted fresh restrictions in Los Angeles and elsewhere.

The new rules mean Hotville Chicken, a south Los Angeles restaurant specializing in "Nashville-style" spicy dishes, will have to shut its outdoor eating space after already closing the dining room.

"It's going to hurt," said owner Kim Prince, who expects the business should pull through with pickup and delivery.

Many stores like "One of a Kind Hats" are still open, but struggling.

"It's really slow," said owner Meeka Robinson Davis, who estimates sales of her custom-made hats are down about 70 percent because her cliental no longer needs items for church, weddings or other gatherings.

"Where are people going? They're not going anywhere."

At least three businesses on Davis' block have shuttered as she turns to personal savings and grant funds to stay afloat.

Between March 1 and August 31, 163,735 businesses on Yelp closed across the US, with about 60 percent permanently shut, the website said in September.

Factors behind this difference include the more severe health toll of coronavirus among communities of color and weaker banking relationships that positioned Black companies unfavorably for federal small business supports, according to the Fed paper.

"COVID-19 has exacerbated these issues and businesses in the hardest hit communities have witnessed huge disparities in access to federal relief funds and a higher rate of business closures," said Claire Kramer Mills, assistant vice president at the New York Fed.

Pinning down the total number of Los Angeles casualties is difficult, because some companies have relocated or scaled back to bare bones, said Joe Rouzan III, chief executive of the non-profit Vermont Slauson Economic Development Corporation (VSEDC) in Los Angeles.

"Not until the dust settles with Covid will we see the full effect, but we know there's going to be some serious damage," he said. "When you look at Covid, we haven't even peaked yet."

Some companies have been able to pivot their businesses through growing e-commerce sales.

But the store received an unexpected burst of demand in June after author Ibram Kendi mentioned the shop in a radio interview in the wake of racial justice protests following the killing of George Floyd.

That prompted thousands of online orders as texts on antiracism and Black history rose on the best-seller list, boosting the bookstore that has been a fixture in the Black community for years.

"It's been an incredible summer for books you like to sell," Fugate said, adding that he is "praying" for restaurants and other businesses that are under duress.

E-commerce sales are less of an opportunity at One of a Kind, which focuses on made-to-order items and caters to shoppers who want to see the merchandise up close, Davis said.

The company managed to offset a fraction of the sales hit by making and selling fabric masks.

To cover rent, Davis has tapped six months of emergency savings she had set aside. She also has had some success with local grant programs and obtained funding under the federal Paycheck Protection program.

The company also has in reserve a Small Business Administration loan of $27,000, but Davis is hoping not to use it.

"I don't want to be stuck in debt," said Davis.

Large US banks, which have a spotty history in lending to Black consumers and communities, have unveiled new ventures to support Black businesses and non-white communities.

But Rouzan has been focusing on getting more corporate donations for grant programs, such as a $500,000 sum from Netflix.

VSEDC's website lists 30 Black-owned businesses that are receiving increments between $5,000 and $25,000 from the Netflix pot, including restaurants, hair salons, child care companies and physical therapy companies.

"We are totally focused on grant opportunities," he said. "The last thing these businesses need right now is to take on more debt."