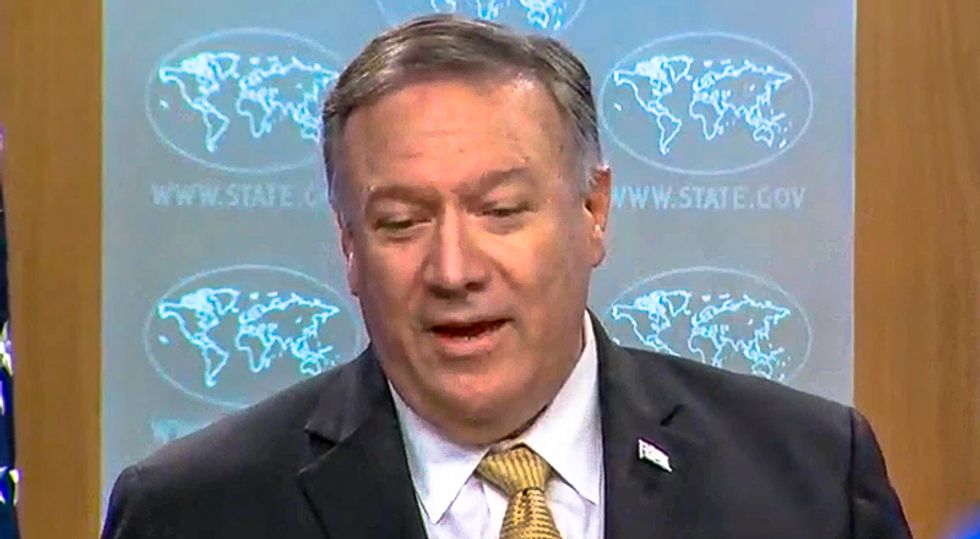 'Gives Aid and Comfort to Our Adversaries'

U.S. Secretary of State Mike Pompeo promised reporters Tuesday that there "will be a smooth transition to a second Trump administration," when asked if he would be willing to assist the incoming Biden administration.

"The world is watching what's taking place, we're gonna count all the votes," Pompeo said, despite almost no modern-day election waiting to be declared until all the votes get counted.

The Secretary of State, currently under investigation for violating federal law, also noted, "the world should have every confidence that the transition necessary to make sure that the State Department is functional today, successful today and successful with a president who's in office on January 20 a minute after noon will also be successful."

One reporter, possibly stunned that the Secretary of State, whose words are, indeed, broadcast around the world, would not acknowledge that Joe Biden is President-elect, pressed Pompeo.

"Do you believe there's widespread voter fraud, that the reports that we're getting from Pennsylvania from Michigan showing vote totals with massive leads, significant leads with 99% reporting, are going to be overturned and that the United States failed to conduct a fraudulent-free election?"

The world is stunned at what Republicans are doing right now.

"It took us 37-plus days in election back in 2000, conducted a successful transition then I'm very confident that we will count, and we must count every legal vote," the Secretary of State added.

There is no comparison to the Bush v. Gore 2000 election, which hinged on hanging chads and votes in Florida, and Joe Biden's nearly 5 million vote margin over Donald Trump.

Many on social media are furious at Pompeo.

In the “Alice in Wonderland” Department, here is Pompeo just now: "There will be a smooth transition to a second Trump administration."
— Michael Beschloss (@Michael Beschloss) 1605032392.0

Others expressed outrage or fear:

Pompeo's statement is beyond unacceptable, and requires an immediate censure by the House and commencement of oversight hearings.
— Matt McDermott (@Matt McDermott) 1605033378.0

Pompeo and other Republicans likely feel they have to say things like this in order to have a future in the GOP. Bu… https://t.co/hPQj5kiM3T
— Nathaniel Rakich (@Nathaniel Rakich) 1605034182.0

“It was a joke” has been the refuge for people explaining away a lot of the president’s statements including pardon… https://t.co/gnSLK76AVj
— Maggie Haberman (@Maggie Haberman) 1605034035.0