Analysis: Texans in many border counties voted for Donald Trump — and then for Democrats 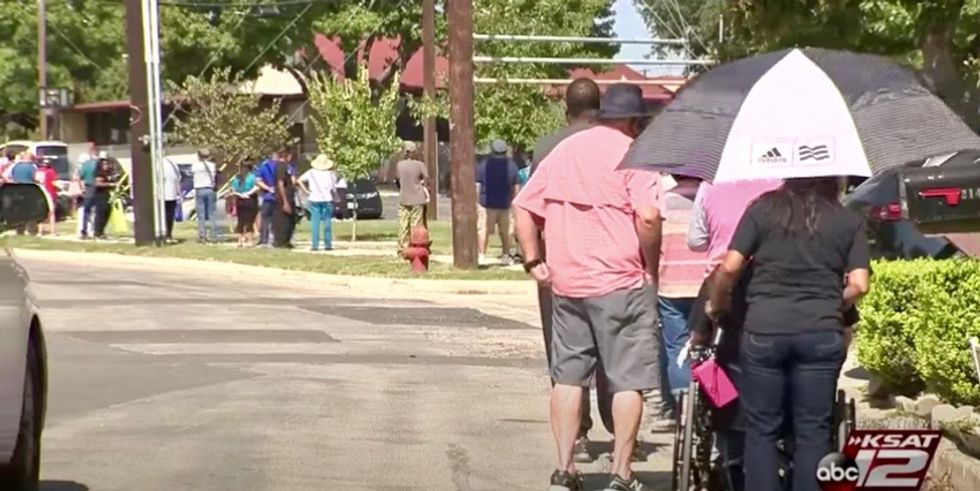 Statewide, Texas Republicans outperformed the leader of their ticket.

In several places along the Texas border, the opposite happened. Much has been written about Trump’s strong performance in the persistently blue counties on the Texas-Mexico border. His border supporters were numerous and enthusiastic. The New York Times sent reporters to Zapata County, which flipped from its customary spot on the Democratic side of the aisle to a seat on the Republican side. The Wall Street Journal went to Starr, where Trump improved dramatically on historical Republican results.

But it’s not like those blue counties switched sides altogether. Voters there supported Trump — in most cases that meant he still lost, but by less than in his first race in 2016 — but then many of them went back to voting more or less like they usually do.

Start with Zapata County. Chrysta Castañeda, a Democrat running for a seat on the Texas Railroad Commission, beat Republican Jim Wright in Zapata by 531 votes. (Wright won statewide, by almost 10 percentage points.) At the same time, Trump was beating Biden in Zapata County by 212 votes.

Castañeda wasn’t the odd duck on that county’s ballots. Trump was. While he was winning, the same Republican candidates who outperformed him statewide were often losing. U.S. Sen. John Cornyn landed 363 votes behind MJ Hegar. Nathan Hecht, the chief justice of the Texas Supreme Court, lost to Democrat Amy Clark Meachum in Zapata by 512 votes. The chief got 53% of the statewide vote, but in Zapata County, he only got 41%.

It’s both interesting and not that consequential. Only 3,279 people voted in Zapata County. Many of the border counties are rural, and a change in a relatively small number of votes can produce outsized percentage shifts.

Even so, this election marked a significant and unusual change of direction. If Trump had performed like the rest of the Republican ticket, the border votes wouldn’t be a topic of conversation. And in some ways, the numbers point to a result that’s more complicated than a county moving from one party to the other.

Several of these counties only did it for the president.

Some actually flipped, like Val Verde County, where Del Rio is the county seat. Trump won by 1,438 votes. Cornyn won by 1,454. Hecht didn’t hold the same margin, but he finished 612 votes ahead of Meachum.

In others, Trump closed the gap but still lost to Biden. In Starr County, where Rio Grande City is the seat, Trump lost by 875 votes — or 5 percentage points. That’s a remarkably good showing for a Republican in a statewide race. At the same time, Wright, the Republican in the Railroad Commission race, was losing by 3,581 votes to Castañeda, the Democrat. That’s a 25-percentage-point gap. Hecht’s numbers were similar — the kind of results Republicans have come to expect in what has been a reliably Democratic part of the state.

Statewide, more than 447,890 people who voted in the presidential race didn’t vote in the lowest race on the statewide ballot, a contest for a seat on the Texas Court of Criminal Appeals. By that point, voters had looked at all of the statewide races and their local race for Congress. They were just about to enter the section of the ballot for seats in the Texas Legislature.

Some wore out even faster: 172,135 fewer people voted in the second race on the ballot — for U.S. senator — than in the presidential race.

That means 98.5% were still around for the Senate race, and 97.3% of the presidential voters stuck in there until that judicial race. Statewide, fewer than 3% quit the ballot before voting in the legislative races.

Some of the president’s border voters hung in there. In Val Verde County, 96.5% made it from the presidential race down to the chief justice of the Texas Supreme Court. But in Zapata County, just under 85% did, and in Starr County, about 79% made it.

The rest voted in the top races and then went on about their business.

Disclosure: The New York Times has been a financial supporter of The Texas Tribune, a nonprofit, nonpartisan news organization that is funded in part by donations from members, foundations and corporate sponsors. Financial supporters play no role in the Tribune's journalism

UK Prime Minister Boris Johnson faces two high-stakes encounters in parliament on Wednesday after his government was rocked by the shock departures of two senior ministers.

Rishi Sunak resigned as finance minister and Sajid Javid as health secretary on Tuesday night. Both said they could no longer tolerate the culture of scandal that has stalked Johnson for months.

A skeleton of a Gorgosaurus dinosaur is going up for auction for the first time and is expected to fetch between $5 million and $8 million, Sotheby's said Tuesday.

The auction house will put the specimen, which is 10 feet tall (three meters) and 22 feet long, under the hammer in New York on July 28.

American ice cream brand Ben & Jerry's said Tuesday it is suing its parent company Unilever to block a move that would see its product sold in West Bank settlements, which would run counter to its values.

The company, known for its political activism, took the unusual step seeking an injunction after London-based Unilever last week announced it had sold its interest in the ice cream to Israeli license-holder Avi Zinger.