As the wing-nut media turns: What’s the Huckster to do? 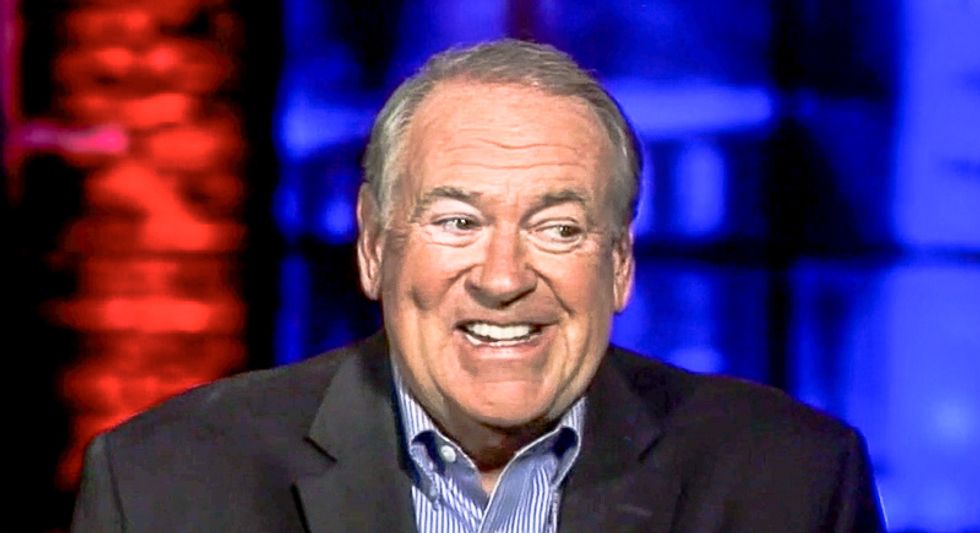 Will Mike Huckabee drag his knuckles from Fox News to Newsmax as part of the Extremely Far Right’s civil war? Where’s the best TV home for a pulpit from to which preach the really uncut CRAZY stuff?

These and other burning questions of our time are top of mindlessness for supporters of Donald Trump. They might not matter so much to the nearly 80 millions of us who voted to send Trump packing, but the unfolding drama in wingnut media is one traffic crash that you cannot be blamed for slowing down to gape at.

As the Daily Beast reports today, Huckabee appears to be “playing both sides” in the hot war between Fox News and Newsmax.

“Over the past several months, and most especially following the election, Newsmax has been making a concerted, at times shameless play for Trump loyalists disenchanted with Fox News having called the election for President-elect Joe Biden and largely dismissed President Donald Trump’s baseless allegations of a “stolen” election,” the Daily Beast reports.

“And now the fledgling cable channel is featuring Huckabee—a Fox News contributor who also hosts a show that re-airs on Newsmax as part of a partnership with a Christian TV network—in a promo directly appealing to disillusioned MAGA fans, including a not-so-subtle jab at the “fake news” networks, which presumably now includes Fox.”

So there’s that. Huckabee certainly seems to be primed to profit splendidly by leveraging his gleefully conflicting interests. On the one hand, he gets paid to show up at Fox News -- usually after the coffins open at night, although occasionally by day, such as a recent appearance in which he proudly was the only male on the show “Outnumbered.”

But Huckabee trashes Fox News, especially the occasional journalist with actual facts, when not on its air. And he appears glad to allow Newsmax to use his unlikeness to kick Fox where it hurts.

Huckabee does still use Twitter to promote his appearances on Fox News, up to a point. The most recent one, for an appearance last night in that strange void of the universe known as “Hannity,” seems to have been promoted in a rather insulting manner to the host.

“I got nowhere else to go?” There’s some shade, Sean.

Huckabee continues to rail Trumpishly at all media this side of QAnon. This morning, he retweeted this video rant from Trump communications aide Dan Scavino, who holds the dubious distinction of having polished the emperor’s boots longer than anyone else in the administration:

Who writes the script that is parroted by virtually all "news" talkers? Media is being manipulated which means the… https://t.co/RpaE75ZGOL
— Gov. Mike Huckabee (@Gov. Mike Huckabee)1605693698.0

In fairness to the Huckster, that’s only his most recent bizarro media contribution to social media.

There was also this:

Most major media outlets have begun to refer to Joe Biden as "PRESIDENT ELECT." This is disinformation at its fin… https://t.co/BCytKTUlAp
— Huckabee (@Huckabee)1605054106.0

And, as the Daily Beast posted, this:

The Daily Beast provided a pretty fair summation of it all.

“Following the election, Newsmax has witnessed an exponential growth in viewership as it has sought to mine the anger of Trump supporters’ anger with Fox News for its decision desk’s early projection for Biden to win Arizona—a move that reportedly angered the president to the point where top aides frantically called Fox allies to demand a retraction—and for its news-side personalities’ repeated debunking of the president’s lies about widespread voter fraud,” the Daily Beast reported.

“With a lineup featuring a mix of ex-Fox News personalities, right-wing media misfits, and Trumpworld castoffs, the MAGA-boosting outlet has refused to call the election for Biden—an odd boast considering Newsmax does not have a news desk normally tasked with making such projections. The network has also repeatedly boosted the president’s baseless and unsubstantiated claims that the election was stolen from him via widespread voter fraud.”

And Huckabee himself has praised Newsmax for its refusal to treat Biden as the president-elect, all while seemingly taking a potshot at the network that has long employed him as a host and then later as an on-air contributor.”

So stay tuned, or not. It’s a fascinating show either way.