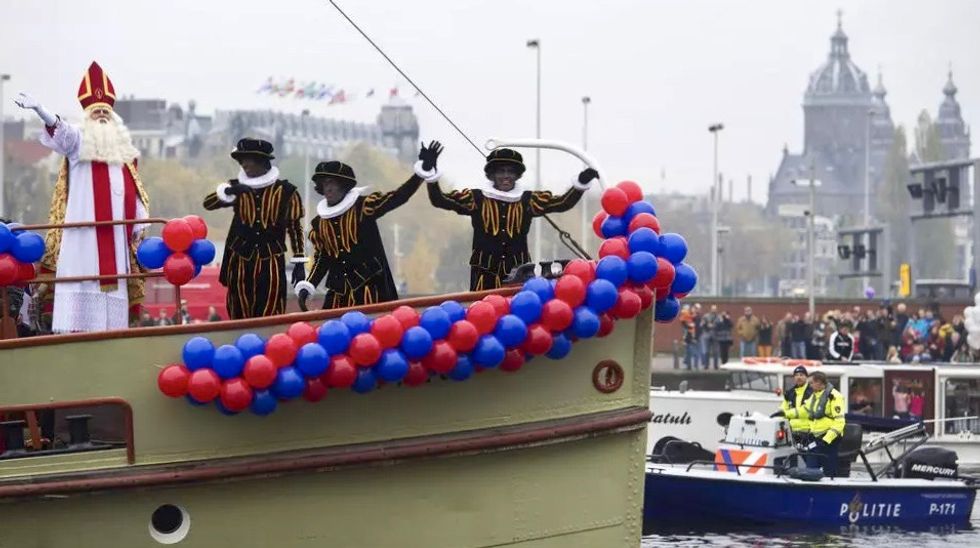 Known in Dutch as Zwarte Piet - Black Pete - he is the buffoonish helper of Saint Nicholas, who gives out sweets to children and wraps presents EVERT ELZINGA AFP (AFP)

Wearing blackface, thick red lips, and an afro wig, the festive character of Black Pete causes outrage abroad but still thrives in the Netherlands and parts of Belgium.

Here are key questions and answers about the controversy over a character supporters defend as traditional fun but campaigners lambast as blatant racism.

Known in Dutch as Zwarte Piet -- literally Black Pete -- he is the buffoonish helper of Saint Nicholas, or Sinterklaas, who gives out sweets to children and wraps presents.

Traditionally, Saint Nicholas, an old man with a white beard, a red bishop's mitre and a red and white costume, arrives on a boat from Spain in mid-November along with several "Piets".

The "Piets" are omnipresent in the street parades that take place across the Netherlands in the run-up to December 5, the eve of Saint Nicholas Day, when Dutch children and their families unwrap presents and sing songs.

According to legend, Saint Nicholas on his horse and Black Pete then hand out presents to children, coming down the chimney of people's houses, much like Santa Claus, with whom he shares several characteristics.

- Where does Black Pete come from? -

The festival of Saint Nicholas dates from the 16th century but Black Pete does not appear until the 1850s.

In an illustrated book called "Saint Nicholas and his Servant" by the Dutch author Jan Schenkman, Black Pete can be seen for the first time at the old man's side.

The book shows him in clothes similar to those worn by servants of the Moors of North Africa.

Black Pete appears to be a jovial version of the more sinister helpers of Saint Nicholas that can be found elsewhere in European folklore, who punish naughty children.

These include Pere Fouettard -- "Father Whipper" -- in French-speaking regions of France, Belgium and Switzerland, and Krampus in Austria and parts of central Europe.

- Why is Black Pete so divisive? -

They say his appearance evokes colonial times when the Netherlands was part of the slave trade, particularly from Suriname.

In 2015 a UN committee on racial equality said the character reflected "negative stereotypes" and was seen as "a vestige of slavery" by many people.

Many Dutch have however grown up with the tradition and children often dress as Black Pete.

Far-right parties in the Netherlands have also latched onto the issue.

The campaign against Black Pete is led by the Kick Out Zwarte Piet (KOZP) campaign, which has for a decade led regular protests at Sinterklaas parades.

Dutch artists from African and Surinamese backgrounds have regularly spoken out against the tradition.

Supporters of Black Pete have held numerous counter-protests against KOZP demonstrations, sometimes throwing eggs at them and clashing with their opponents.

The Netherlands started to make changes in 2014, when Saint Nicholas was accompanied by "Cheese Pete", whose face was painted in yellow.

Since then many broadcasters, local councils and schools have opted for "Sooty Pete" with grey streaks on his cheeks, supposedly caused by his descent down the chimney.

The coronavirus pandemic has meanwhile meant that most of the usual parades have been cancelled this year, meaning that Pete has barely showed his face in any colour.

Dutch Prime Minister Mark Rutte meanwhile said in June he believes that in years to come there "will be no Zwarte Piets any more".