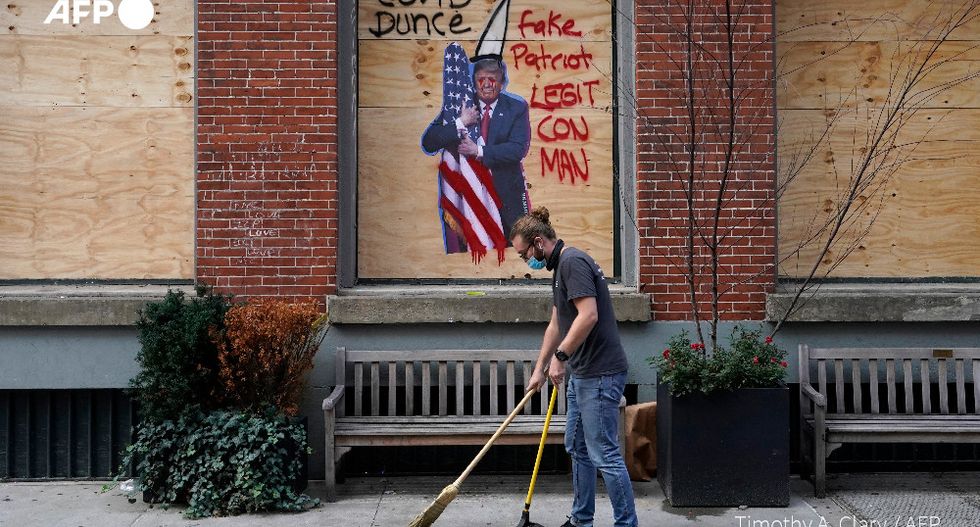 AFP photo by Timothy A. Clary.

US business leaders are calling for calm following Tuesday's election even as they brace for potential trouble on the streets and inside their companies in case of a disputed result.

The fears were highlighted in many US cities where retail stores were being boarded up, as some key executives expressed concerns about public reaction.

Facebook chief Mark Zuckerberg last week warned of the potential for civil unrest as votes are tallied in a US election that will be "a test" for the social network.

Zuckerberg expressed his concern recently while describing safeguards against misinformation and voter suppression at the leading social network that are intended to avoid the kinds of deception and abuse that played out four years ago.

"I'm worried that with our nation so divided and election results potentially taking days or weeks to be finalized there is a risk of civil unrest," said Zuckerberg.

American companies are striving to maintain the appearance of political neutrality while they ramp up security and watch for clashes between employees with conflicting political views in an election so hotly fought it is at a flashpoint.

The risk appears heightened amid concerns that President Donald Trump may challenge the validity of the results of the race against Democrat Joe Biden.

"This has been a difficult election for a lot of companies to navigate," Control Risks associate director Allison Wood told AFP.

The business risk consulting firm has seen an uptick in requests for additional security, both armed and unarmed.

While retailers have been most interested in the potential of looting or rioting, operations with around-the-clock shift workers are worried about trouble in the streets preventing employees from showing up, according to Wood.

Companies are also worried that polarizing political themes fueling conflict in the streets will ignite clashes on factory floors or in other facilities.

"At manufacturing facilities or other essential operations with people on-site, that is certainly something businesses are thinking about," Wood said.

"For a lot of companies, that potential is mitigated because people are still working from home."

"Intelligence support during a time of unrest will allow local operations or security managers to have a near real-time overview of the local climate and operating environment should tensions rapidly escalate," Skule said in a post.

Large rallies and demonstrations are expected in cities across the country no matter the outcome of the US election.

The potential for violence will depend on an array of factors, including the winning candidate; delay in election results, and social media disinformation, according to Skule.

"This is clearly an election in which there is a lot of tension on both sides of the political spectrum," Wood said.

"People are viewing the election in existential terms, and that could turn to violence and looting quickly."

Walmart last week reversed course after it said it would keep guns and ammunition stored off of sales floors, out of easy reach by customers.

The retail giant cited unrest in Philadelphia when it announced the security measure, but put weaponry back on the sales floors after a day.

The Business Roundtable association representing a who's-who list of top US companies put out a call for people to support the voting process, even if counting takes longer than usual due to a shift to mail-in ballots because of the pandemic.

"Even under normal circumstances, it can take time to finalize results," a joint statement read.

"We urge all Americans to support the process set out in our federal and state laws and to remain confident in our country’s long tradition of peaceful and fair elections."