Donald Trump Jr. called for ‘total war’ — and people can’t look away from the meltdown 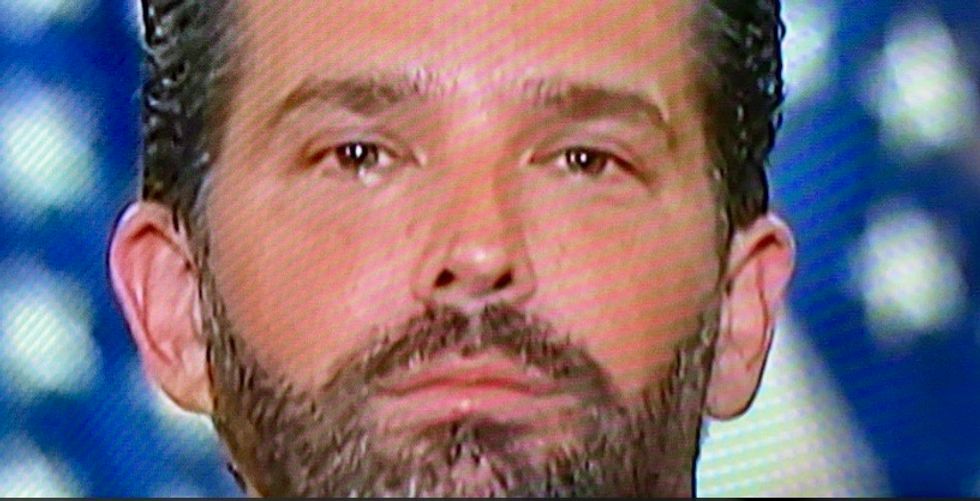 President Donald Trump's son, Donald Trump Jr. is having a conniption fit over the results of the election, claiming that because states are counting votes that they are somehow committing voter fraud.

His anger has grown so great that he called for a "total war." Ironically, it's something that many cities prepared for after the election results. When Twitter decided to put a disclaimer over the tweet, it sent Don Jr. further into a tizzy.

Twitter is censoring and flagging this of course why would we not want to find out if these things exist? If they d… https://t.co/qCnoLLY2zn
— Donald Trump Jr. (@Donald Trump Jr.) 1604616350.0

The move comes after former White House adviser Steve Bannon called for the beheading of FBI Director Christopher Wray and Dr. Anthony Fauci. Under normal circumstances, calling for the assassination of a public official results in charges, but it's unclear if that will apply given Bannon is a prominent Trump ally.

Most of the non-Trump supporters were disgusted and concerned. Some did, however, turn to mockery.

You can see their tweets below:

Twitter is allowing Don Jr. to incite a Civil War on their platform. A label does absolutely nothing. Remove his ac… https://t.co/JYaeOEnVTO
— Kaivan Shroff (@Kaivan Shroff) 1604616383.0

They are censoring this ⁦@DonaldJTrumpJr⁩ tweet, so all I’ll say is, DISCOVERY AND DEPOSITIONS!!! https://t.co/DekLiSpb7k
— John Cardillo (@John Cardillo) 1604616238.0

DESPICABLE >> Don Jr. is calling for nothing less than violence in the streets if Biden is declared the winner. Se… https://t.co/CMuxmcTYO3
— Steven Greenhouse (@Steven Greenhouse) 1604617012.0

Don Jr. calling for "total war" over the election is dangerous, but even more so it's monumentally stupid. Peaceful… https://t.co/pnZXDeppGh
— Mark Follman (@Mark Follman) 1604616152.0

WTF would @DonaldJTrumpJr know about going to war? He thinks only suckers and losers do that! Eat shit, junior. Yo… https://t.co/odtJtyZqym
— DC Pundit (@DC Pundit) 1604616430.0

Bannon and Don Jr outright call for civil war. For two years on Twitter I’ve been warning all of your dumb brains a… https://t.co/yqShXPZbVU
— shahid Sikander (@shahid Sikander) 1604617010.0

Bannon and Don Jr outright call for civil war. For two years on Twitter I’ve been warning all of your dumb brains a… https://t.co/yqShXPZbVU
— shahid Sikander (@shahid Sikander) 1604617010.0

@JoshuaPotash Don Jr's tweet saying his daddy should "Go to war against the fraud" got shut down by Twitter Support… https://t.co/3kcncFL0Su
— Miji Mellado (@Miji Mellado) 1604615453.0