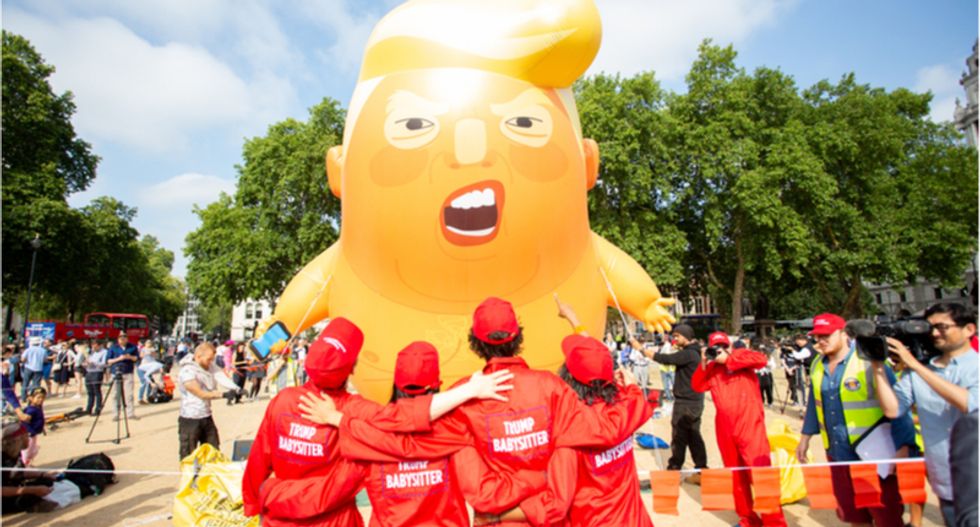 July 13, 2018: Donald Trump’s visit to England is met with protests and a blimp flying over London. The protest team poses for the cameras with Angry Trump Baby. (Shutterstock)
One of the many overlooked stories during the run-up to this election was the New York Times series based upon Trump's tax documents. Sure, we heard about it, but I don't think the full scope of it sunk in. Trump didn't pay federal income taxes for years, he got a multi-million dollar lifeline from "The Apprentice," he owes vast sums to banks — which he has personally guaranteed — and he played fast and loose with tax write-offs for his alleged philanthropy, which don't always add up. It was an unprecedented indictment of a sitting president.That series was a sequel to the Times' earlier award-winning series on Fred Trump's tax fraud scheme which set Trump and his siblings up for life and cheated the taxpayers of millions of dollars. It showed how Donald went on to waste his inheritance on failed business ventures and kept coming back to the trough for more each time he got into trouble. He even cheated members of his own family out of their rightful inheritances — his niece Mary Trump, the psychologist and author of a bestselling family memoir, recently filed a lawsuit based on some of the information revealed in those reports.

Although we've known for many years that Donald Trump was a failed businessman and con artist, these two series provided a fuller picture of his finances and business practices than we'd seen before. What becomes obvious when you review the whole story from the beginning is that Trump has been dancing as fast as he can for many years, always on the verge of total collapse and somehow surviving by getting through life one day at a time.

The most recent Times report disappeared almost immediately because it came in the last two weeks before the election and there just wasn't any bandwidth available for it. It was the story of Trump Tower Chicago and how Trump mismanaged the entire development, as usual. When the financial crisis hit in 2008, he found himself on the hook to Deutsche Bank and a hedge fund for hundreds of millions of dollars. The creditors tried to work with him but finally hit their limit, at which point Trump went into his usual "fight back" mode and sued the bank for allegedly causing the financial crisis, which he claimed was force majeure, meaning he didn't have to pay back the loans. He became such a pain in the ass, with bad-faith negotiations and lawsuits, that the institutions ended up writing down the loans just to get him off their backs. That's how he works, whether with a small vendor who sold him some carpeting or a major multinational bank.

The Chicago tower was just one of many examples of Trump's ability to escape responsibility throughout his life. He's run that game going all the way back to the 1970s when the Trumps were sued for discrimination against potential Black and Hispanic tenants and Trump took the audacious step of suing the government for defamation. Rather than deal with him, regulators chose to settle the case.

He's lied to banks for years about how wealthy he is, while telling the government in virtually the same breath that he was nearly broke. Banks kept lending to him and kept losing money, until he was finally left with only Deutsche Bank. According to a Reuters report last week, that relationship may finally have reached the end of the line as well:

Deutsche Bank AG is looking for ways to end its relationship with President Donald Trump after the U.S. elections, as it tires of the negative publicity stemming from the ties, according to three senior bank officials with direct knowledge of the matter. Deutsche Bank has about $340 million in loans outstanding to the Trump Organization.

These loans are coming due within two years and are personally guaranteed by Trump. The bank would apparently like to sell the loans on the secondary market — but it's likely no one will want to buy them. And that the $340 million is just a portion of the enormous debt he reportedly owes to entities we still can't identify.

The fact that Trump was a terrible businessman and worse dealmaker was something once kept on the QT among the financial elite (probably to cover their own ineptitude in repeatedly lending him money) but everyone knows what he is now. They know what his family is. His "brand" is no longer something anyone can sell as luxury. (Remember, he was dropped by a whole bunch of his sponsors during the first campaign.) Everything Trump has done as president has only made his name more toxic.

Meanwhile, his political game has been run in similar fashion. Trump paid off his porn-star mistress and evaded the lawsuits brought by various players both professional and personal, not the least of which are the women who have sued him for defamation and assault. His henchmen in the Republican Party have covered for his corruption and incompetence every step of the way.

But now the American people have finally held him accountable and his presidential immunity from prosecution is about to come to an end. That is why we're all watching this unprecedented spectacle of a president who lost re-election wildly flailing about in hopes of fending off the reckoning he's avoided his whole life. He's still dancing.

Back in 2018 just before the midterm election, Trump was at one of his rallies musing about the fact that Republicans might lose. He told his adoring crowd, "And you know what you do? My whole life, you know what I say? 'Don't worry about it, I'll just figure it out.'"

But there is no way out of this defeat. He has been repudiated by a clear majority of the electorate and there's nothing he can do about it. He can't sue his way out of it or renege on his promises. But he can certainly lie about it, say he was cheated and reinvent himself as a martyr to the MAGA movement. He's got about 70 million people ready to believe him.

This is yet another reason why I believe Trump will announce he's running for president again in 2024, and will find ways to monetize that possibly-fictional campaign and keep GOP donors and others spending money to remain in his favor. Maybe he'll get some sucker to pay for him to start a media company of some sort.

Trump may not be able to sell condos anymore, or a perfume called "Success." But he's got a new brand anyway, and millions of deluded customers. I suspect he'll be out there selling that for quite some time.