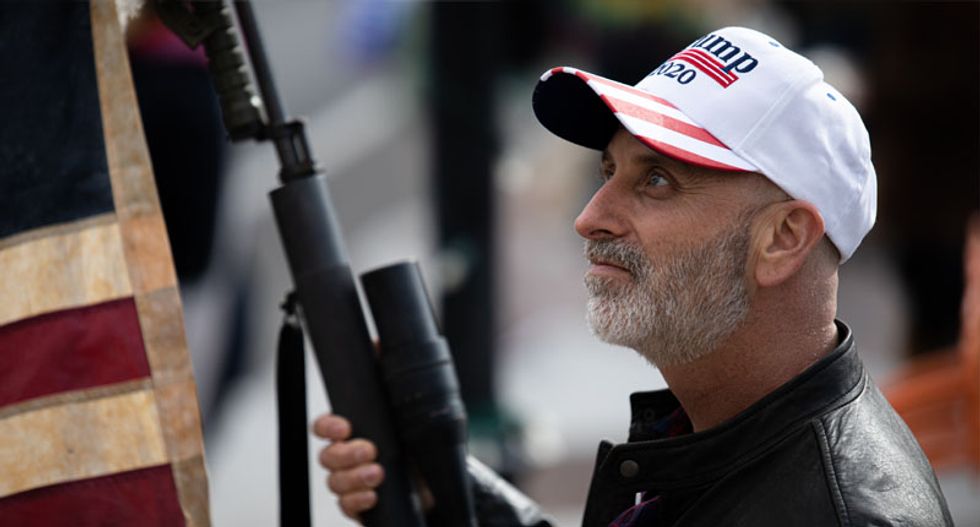 Trump supporters gather in Nevada's state capital for the, "Stop the Steal," protests after the president's loss to Joe Biden in the 2020 election. (Trevor Bexon / Shutterstock.com)

On the 40th anniversary of that historic summer moment in 1974 when three Republican politicians marched to the White House to tell President Richard Nixon it was time for him to go, the Arizona Republic published a revealing piece that suddenly looms ominous today.

"My dad kind of bristled at the idea that he and Goldwater talked Nixon into doing what he did," son Tom Rhodes told The Arizona Republic. "I don't think any one of the three of them took any pride in that moment."

And there was this: “Contemporary news reports and later retellings of the meeting by Goldwater and Rhodes indicate that they didn't lobby Nixon to quit, although both were disillusioned by the Watergate scandal and cover-up.”

The reporting has new relevance six years later and not merely for correcting the historical record. It turns out the visit to Nixon was less about political courage and more about political reality.

These overlooked truths should resonate powerfully with those pining for Republican lawmakers to experience an epiphany and move to force Trump from his bunker. In 1974, politicians were not doing the right thing. They were merely informing an embattled president that they could not save him.

Don’t hold your breath waiting for today’s Republican leaders to repeat that with Trump. Unlike Nixon, he does not face forced removal from office by Congress, not any more than he did for committing high crimes and misdemeanors by blackmailing Ukraine and covering it up.

What’s more, Trump has something Nixon didn’t: a political base of tens of millions of supporters who follow him with the devotion of a cult.

Even if Trump leaves the White House on his own volition on or before January 20, 2021--and he might--he will be taking his 88.6 million Twitter followers with him. If anything, Trump will grow in stature from whatever martyrdom he can filch.

In 1974, Republicans had been reluctant to jettison Nixon because of what his personal disgrace would mean to their own political fortunes in 1976, not out of personal fear of him. In post-factual 2020, Trump arguably wields as much political clout as a cult leader-in-exile than as a failing president.

Unless and until Trump gets neutered in retirement by the judicial system--which could occur--he and his angry base will pose more of a threat than ever in 2022 or 2024 to any Republican politician who dares cross him. And to the nation

That explains why Secretary of State Mike Pompeo, a 2024 presidential hopeful, stopped perilously short of raising a Nazi salute Monday when devilishly asserting to the media that he’s focused on a second Trump term. Sure, heads exploded amongst normal people, but they weren’t Pompeo’s audience.

And no, it wasn’t just the fabled Audience of One to whom Pompeo was directing his sedition. It was those 70 million Trump voters upon whom the secretary must rely when he seeks the presidency in four years.

So it goes for every Mitch McConnell or Ted Cruz or Kevin McCarthy or (especially) Georgia senators Kelly Loeffler and David Perdue, who can only survive politically in their disfigured political party by groveling before its tyrant. They made their deal with the devil, and the devil isn’t about second chances.

The most amazing thing about the chattering class of media and politicians is that any of this continues to amaze. Perhaps it’s understandable to have underestimated how Trump’s crazed messaging might get embraced with some profound stupidity by a sizable swath of America.

But now that it has happened, there are no excuses for further puzzlement.  Rather than looking wistfully at those Republican politicians who cover their faces to TV cameras like mafia informers exiting a courthouse, Americans might start worrying about whatever evil acts Attorney General William Barr might be planning.

And everyone’s eyebrows should raise at the bizarre spectacle of a purge at the top levels of the Pentagon by a psychotic narcissist with roughly 10 weeks of unbridled power at his disposal. Especially since Trump apparently owes hundreds of millions to foreign interests who might not play nice if he cannot pay up.

This much is alarming: Joe Biden’s electoral victory is certain; what happens next is not.

That’s not happening now. It didn’t even happen back then.