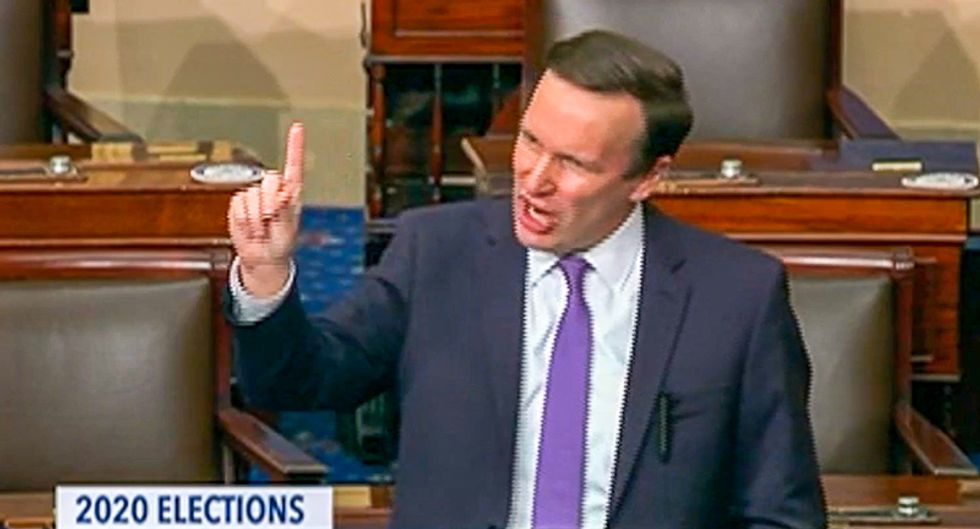 Sen. Chris Murphy (D-CT) lashed out at his Republican colleagues on Tuesday for refusing to accept that President Donald Trump had lost the 2020 election.

In a speech on the Senate floor, Murphy noted that one Republican candidate had lost his race by 72 points but is refusing to concede. Another GOP candidate refused to concede after losing by 40 points, Murphy said.

"There is an epidemic of delusion that is spreading out from the White House and infecting the entire Republican Party," the senator asserted. "And it presents a real threat to this country. President Trump didn't win the election. Every single one of my colleagues knows this. And he didn't just lose, he lost by a pretty substantial margin."

Murphy reminded his fellow senators that Democratic candidate Hillary Clinton conceded the 2016 race the day after the election even though she lost most battleground states by a slimmer margin than Trump did in 2020.

"Why hasn't the president conceded?" he asked. "It's not because there was voter fraud or because the election was stolen from him."

According to Murphy, Trump "believes there's a chance he can remain as president without having won the election so long as congressional Republicans are willing to stick with him step by step by step. And so far, there's no evidence that congressional Republicans are ever going to step away from President Trump's delusional assault on democracy."

"Just because he has the right to mount these legal challenges doesn't mean Republicans have to support him in those efforts if they contravene the interests of democracy," he added. "What if he gets the message from Republicans in Congress that if you're willing to support all the steps he's taken since Tuesday, that you will continue to support his efforts to try to remain in office despite losing both the popular vote and the electoral college?"

Murphy observed that Secretary of State Mike Pompeo had said on Tuesday that there would be a "smooth transition to a second Trump administration."

"These guys aren't playing," Murphy remarked. "This isn't just for show. They are going to keep pushing the bounds of democracy until somebody stops them. It's logical to ask, if Republicans have been willing to support every conspiracy theory the president engages in over the last week, they why wouldn't they support the next set of attacks on democracy?"