'Even Kavanaugh gets this': Elections experts debate whether GOP can hijack the electoral process 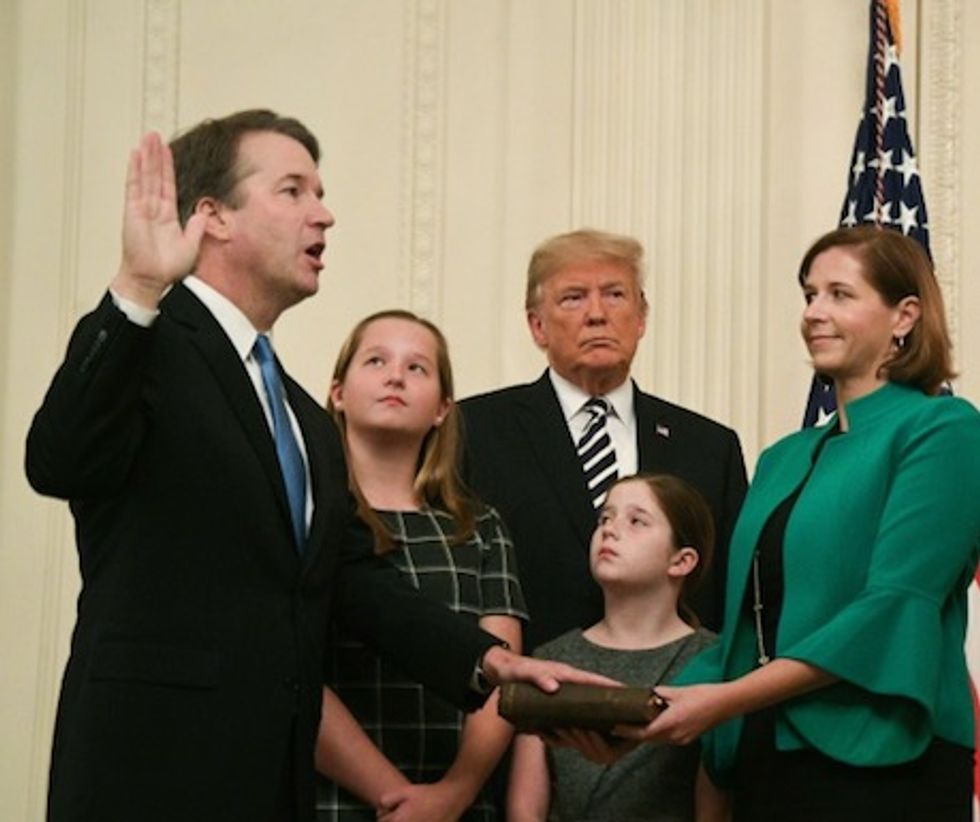 Brett Kavanaugh, left, is sworn in as associate justice of the US Supreme Court by his predecessor Anthony Kennedy (R) before wife Ashley (2nd-R), daughters Margaret (2nd-L) and Elizabeth (C), and US President Donald Trump on October 8, 2018 AFP / Jim WATSON
With multiple competitive races on the electoral map, and an unprecedented number of mail-in ballots to count, it is likely that the country will not know the outcome of the presidential election by Wednesday morning. And given the raft of threatening public statements from President Donald Trump, it is likely that he will reject any unfavorable results outright — a sentiment shared by his base.

But the "safe harbor" deadline, or the deadline that matters the most, is still more than one month away. Dec. 8 marks the latest date individual states can submit their presidential electors to Congress, and the Trump campaign has signaled that it has been eyeing that deadline as pressure point to convince state legislatures to override their voters.

However, the electoral issue this year will likely not be the same as 2016, when Democratic nominee Hillary Clinton's decisive popular vote victory raised questions about whether so-called "faithless electors" would defect from their state's mandate. (Seven did — five abandoning Clinton, and two turning on Trump.)

"There is zero concern about faithless electors," Barry Burden, the director of the Elections Research Center at the University of Wisconsin, told Salon. "The parties have learned from four years ago, and they've been careful to pick loyal electors."

The electoral concern du jour is the faithless elector problem at the scale of an entire state, as The Atlantic outlined last month.

Trump campaign officials and legal advisers told The Atlantic on the record that they had been working with state officials to appoint their own electors as a way to secure victory in a tight election, a move which would precipitate a certain constitutional crisis.

While such a move is certainly possible, the likelihood that it happens and the likelihood of its success are both up for debate. To get an idea of how bizarrely the election may play out on the back end, Salon spoke with a number of experts. While the system may be stretched and strained in unthinkably weird new ways, it is more likely than not that our institutions hold, they predict.

The president is not directly elected by the people but rather by slates of electors who act on behalf of voters in their states. (Clinton is on New York's Democratic roster this year.) Though most states have historically chosen these electors by popular vote, the Constitution does not mandate they do so. The document only says a state shall appoint its electors "in such manner as the legislature thereof may direct."

While every state has complied with the will of its voters in every election since the late 1800s, the Supreme Court held in Bush v. Gore that the states "can take back the power to appoint electors" in 2000.

Sources in the Republican Party, at both state and national levels, claim that the Trump campaign has worked out plans to do just that — overriding votes for Democratic nominee Joe Biden in key battleground states where Republicans control the legislatures.

The gambit would set up a showdown in Congress that would play out in one of three ways (after going through a series of gates): If Democrats take the Senate back and hold onto the House, then Biden wins; if Republicans hold the Senate and flip the House (a less likely scenario), then Trump wins; but if Congress remains divided after the election, the Constitution does not offer a solution.

As Constitutional scholar Norm Ornstein told The Atlantic, "Then we get thrown into a world where anything could happen."

But Jon Sherman, the senior counsel for the Fair Elections Center, told Salon that he believed such a move would not get that far in the first place. The courts would block it, he said, because it undermines one of the fundamental rights granted in the Constitution: due process.

"There are varying levels of crazy here. My view is that the time for this choose-your-own-electors strategy has long passed," he said. "The states have all agreed to hold an election this year to appoint electors. People are voting according to the rules that they have been given. To negate that retroactively would obliterate their due process rights."

A Bush-appointed federal judge in Texas sided with that argument on Monday, when he threw out a GOP lawsuit to invalidate nearly 127,000 ballots cast at what Republicans claimed was an unlawful drive-through polling setup in Harris County.

"Please just don't assert that voters did anything wrong," an attorney for the defense argued. "Their only fault was relying on the instruction of county election officials, even if was an error . . . invalidating the ballot would be profoundly inequitable, and it would almost certainly violate due process."

While Wisconsin law does not provide the legal framework for an electoral grab, an absolutist reading of the Constitution may give Republicans grounds to argue otherwise, Burden, of the University of Wisconsin, said.

"It seems crazy, but it's happened at times," he said. "Hawaii was on the cusp of sending two slates in 1960 until Nixon conceded, and it wasn't an issue. But partisan warfare today is so much more intense."

"There is a trio of midwestern states — Wisconsin, Michigan and Pennsylvania — where you have a split government: a Democratic governor and Republican legislature," he said. "It's conceivable that in one of these states, the legislature would go its own way, and they could send two separate slates of electors."

"Rumors are going around this might happen in Wisconsin, but I don't see a role for the legislature in our state law," Burden said, pointing out that the Democratic governor does play a small part in certifying the electors. "Of course, the [U.S.] Constitution's line is that the legislature has the power to appoint electors, and there's a radical reading of 'legislature' that means only 'legislature' — that's it. But jurists disagree about what that means."

"Even Kavanaugh gets this," Sherman argues, pointing again to the fundamental right to due process, which he believes the Supreme Court would uphold. "I think he understands that no one can take the election from the voters with this type of aggressive and extreme post hoc legislation."

However, Sherman pointed to a "less crazy" twist that CNN analyst Brian Beutler put onto the elector strategy.

"This idea would be that they want to retroactively invalidate a portion of ballots, game it so that valid and invalid ballots appear to have been commingled, say the election has failed and we get to appoint electors," Sherman said. "This is less crazy than the other theory, because it at least acknowledges there is a governing standard, and you would need a pretext to change the process."

Sherman points to Pennsylvania's decision to segregate ballots received after 8 p.m. on Election Day as a model way to prevent strategic commingling.

"It forecloses the argument," he said. "I hope North Carolina takes the hint and does the same."

The creation of such a pretext calls to mind the chaos of the Roger Stone-inspired "Brooks Brothers riot" during the 2000 recount in Miami, except perhaps multiplied across a number of precincts in a number of states.

"The issues this year will be different than in Florida. It won't be about voter rolls or machines, except maybe Georgia," Burden said. "The issues will be about mail ballots, like delivery problems with Postal Service. If they fail to deliver, what becomes of those ballots? These problems could emerge not just in one swing state but a few of them on election night or during counts or recounts afterwards. But it sets off litigation, and then we begin to bump into the safe harbor deadline."

He pointed out that Wisconsin's 2016 recount, demanded and funded by then-Green Party candidate Jill Stein, took about two weeks.

"It can be a lengthy process that could run up against deadlines and how much the party observers challenge, going ballot-by-ballot," he said, which could put additional pressure on otherwise reluctant Republican state legislators to take the reins.

"Florida got right up to that deadline in 2000, and one legislative chamber moved ahead," Burden said. "One could imagine a similar scenario."

But Ted Allen, who heads election systems research at Ohio State University, suggested the system had too much diversity and integrity to be easily bent — even by the most powerful officials.

"In the U.S., elections are run at the county and state levels, providing significant shielding from federal meddling," Allen said. "The election officials have party affiliations, but they are generally balanced within the system and generous and thoughtful people. These officials and state leaders have been hardened by continual press scrutiny and lawsuits, which may help them to resist pressures from the president and others."

"When it comes to the election itself, everyone's opinion, including the president, is irrelevant," Sherman said. "The media and sometimes academics do a disservice by indulging these fantasies. The election system can't sue you for defamation, but if it could it would win."

Electoral College researchers Michael Geruso and Dean Spears at the University of Texas also take a longer view, pointing out that the absurdities of the electoral system incentivize chaos.

"A close election in a tipping point state, like Pennsylvania today or Florida in 2000, provides the opportunity for elections officials or courts to tip the election, whether that is through voter suppression and other bad-faith actions, or merely because of judgement calls, limited capacity or mistakes," Geruso told Salon in an email.

"If you understand that you need a close race in a tipping-point state to generate this type of formula for crisis, then the simple question is: Was 2000 a fluke? Is 2020 a fluke? Or is all of this something we should expect frequently given the statistical fundamentals of the Electoral College System?" he asked.

Odds are greater than 1-in-10 that the Electoral College outcome in any given year could hang on as few as 20,000 ballots in a single state, Geruso and Spears' study shows.

"And it's easy to imagine administrative decisions disqualifying a few thousand ballots," Geruso added. "In 2016, 10,000 mail ballots or more were trashed in each of Arizona, Ohio and Florida, for example."

"The risk of a disputed election is a phenomenon that the Electoral College creates," Geruso concluded. "It wouldn't happen under a national popular vote."