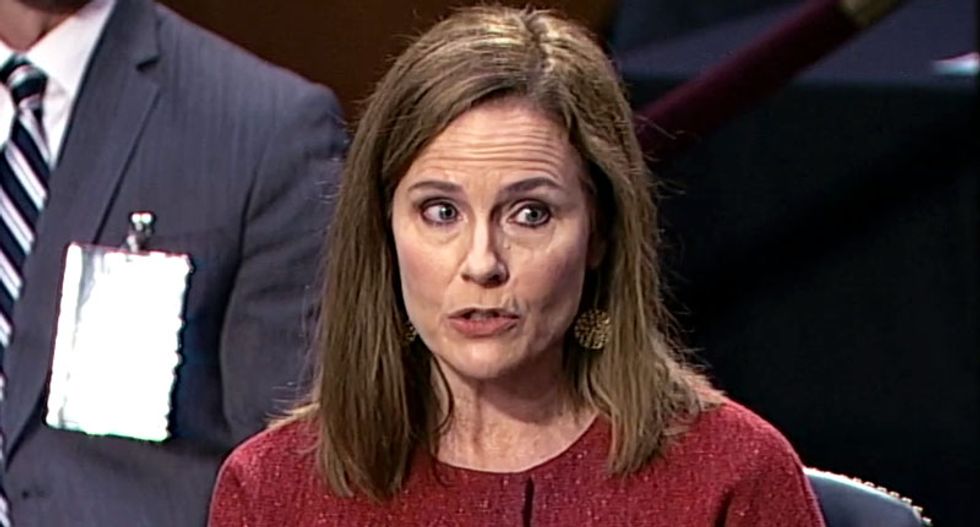 At 11:57 PM Wednesday, three minutes before the country tries to celebrate Thanksgiving during a pandemic, the U.S. Supreme Court ruled 5-4 for a group of Catholics and Jews who sued to prevent the State of New York from imposing restrictions in the future on the number of people who can gather in churches and synagogues.

"The court’s ruling was at odds with earlier ones concerning churches in California and Nevada," The New York Times notes, reflecting the addition of Justice Amy Coney Barrett. "In those cases, decided in May and July, the court allowed the states’ governors to restrict attendance at religious services."

Legal experts are blasting the decision, one that makes clear this new, Trump-ified version of the Roberts court will rule exactly as critics warned: enshrining "religious rights" over all others.

This time Chief Justice Roberts sided with the liberal wing of his court, over the right wing jurists, including their newest member, Justice Amy Coney Barrett. She was joined by Justices Clarence Thomas, Samuel Alito, Neil Gorsuch, and Brett Kavanaugh.

In fact, in his dissent, Roberts blasted Kavanaugh:

As this passage shows, Neil Gorsuch, more so than the other reactionary Supreme Court justices, is the ringleader i… https://t.co/X5J6KlQiEi
— Cristian Farias (@Cristian Farias)1606391156.0

"Justices of this Court play a deadly game in second guessing the expert judgment of health officials about the environments in which a contagious virus, now infecting a million Americans each week, spreads most easily."

And she made clear what's at stake:

“Amidst a pandemic that has already claimed over a quarter million American lives, the Court today enjoins one of New York’s public health measures aimed at containing the spread of COVID–19 in areas facing the most severe outbreaks.”

Here's what other legal experts are saying:

This is a newly configured Supreme Court, one w/ Justices who place religious freedom above ALL else even in the co… https://t.co/7tBRtpPT5x
— Kristen Clarke (@Kristen Clarke)1606383100.0

The Supreme Court's overturning of restrictions on religious services designed to protect the public in a deadly pa… https://t.co/xpYKZ2Vu6N
— Nick Akerman (@Nick Akerman)1606391033.0

Your religious views now give you the right to withhold the services of your business from people whose “lifestyle”… https://t.co/Iq7dtkyWVs
— Joyce Alene (@Joyce Alene)1606393772.0

Condé Nast Legal Affairs Editor Luke Zaleski reminds just how hard then-Judge Amy Coney Bryant worked to try to convince Senators and all of America she would never allow her Catholic faith to interfere with her judgment: