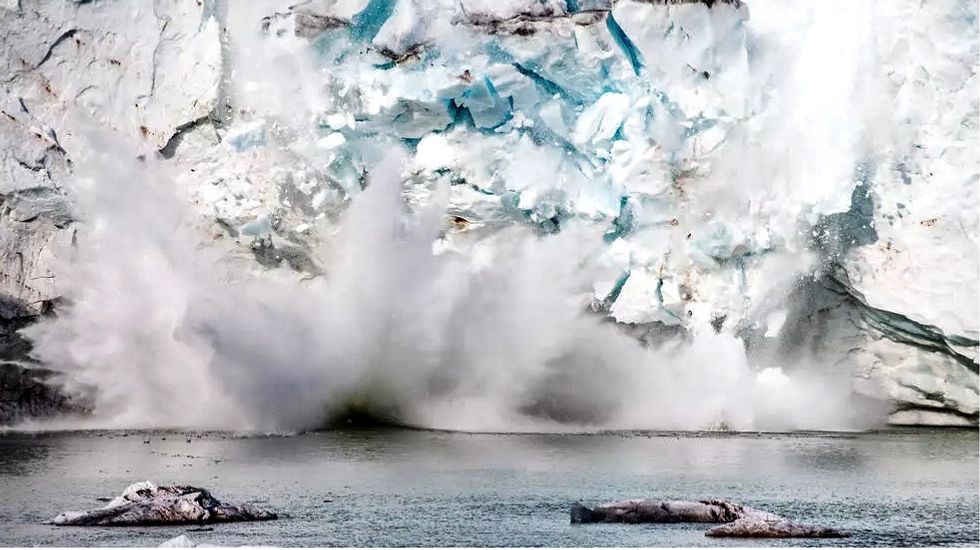 Over the last two decades, the world's ice sheets atop Greenland and Antarctica have become the single largest source of sea level rise Jonathan NACKSTRAND AFP

Until 2000, the main driver of sea level rise was melting glaciers and the expansion of ocean water as it warms.

But over the last two decades, the world's ice sheets atop Greenland and Antarctica have become the single largest source of sea level rise.

A team of researchers based in Denmark and Britain used historical images and a host of other data to estimate how much ice had been lost from Greenland's Jakobshavn Isbrae, Kangerlussuaq Glacier and Helheim Glaciers in the 20th century.

They found that Jakobshavn Isbrae lost more than 1.5 trillion tonnes of ice between 1880-2012, while Kangerlussuaq and Helheim lost 1.4 trillion and 31 billion tonnes from 1900–2012, respectively.

Shfaqat Abbas Khan, a researcher at the Technical University of Denmark, said using photographs taken before the satellite era was another tool to help recreate the last century's ice loss.

"Historical measurements over the 19th and 20th century may hide important information that can significantly improve our future projections," he told AFP.

The UN's climate science advisory panel, the IPCC, has forecast sea level rise from all sources of between 30-110 centimeters by 2100, depending on emissions.

Under the IPCC's high emissions pathway, known as RCP8.5, nothing is done to curb carbon pollution throughout the 21st century, leading to a climate more than 3C hotter than pre-Industrial levels.

But the paper, published in Nature Communications, pointed out that the high-emissions pathway temperature increase was more than four times larger than during the 20th Century, when the three glaciers already added 8mm to seas.

"The worst-case scenario is underestimated. Ice loss may be anywhere from three or four times larger than previous predicted for the thee glaciers considered in this study," said Khan.

A Nature study published in September found that if greenhouse gas emissions continued unabated, ice sheets in Greenland will shed some 36 trillion tonnes this century, enough to lift the global waterline some 10 centimetres.