Here's what the rift between Trump and Fox News means for Democrats: report 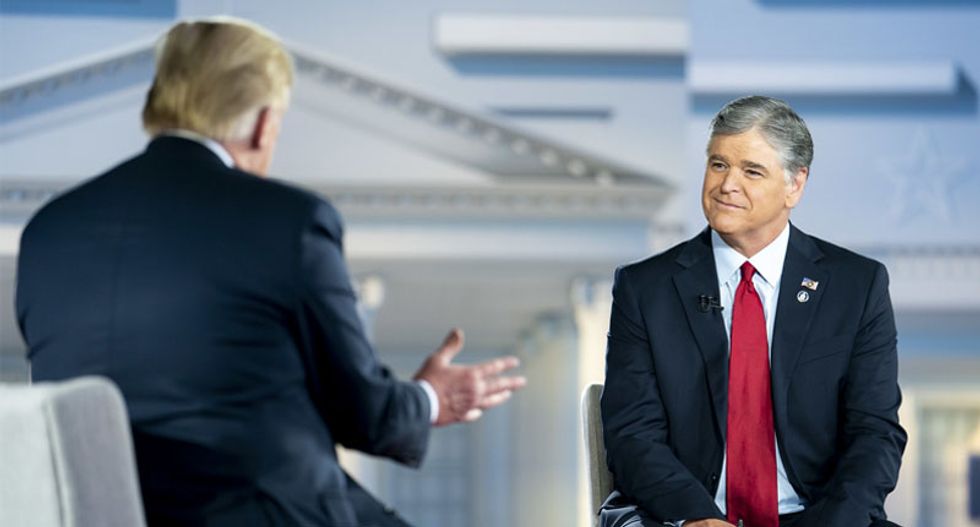 In recent weeks, President Donald Trump has been angrily railing against Fox News and Fox Business, urging his supporters to watch Newsmax TV or One American News instead. And a Daily Beast article by journalists Sam Stein and Maxwell Tani, published on November 21, contemplates what the bad blood between Trump and Fox News could mean for Democrats going forward.

It wasn't a good sign for the Fox News/Trump alliance when head honcho Rupert Murdoch predicted that former Vice President Joe Biden would win the 2020 presidential election, and Trump was furious when Fox News' decision desk called Arizona for Biden on Election Night — even when many other media outlets were still declining to do so. Fox News' decision desk, like the Associated Press, believed that the math was insurmountable for Trump in Arizona; others took a wait-and-see approach.

Stein and Tani explain, "The cable news behemoth has vexed prior Democratic administrations, darting between acting as the voice of the opposition and a legitimate news outlet with the nation's largest audience. But a series of recent developments — including growing animosity between President Donald Trump and some of the more straight-faced personalities at Fox News — has changed the dynamics of this particular political-media nexus. And it has sparked a renewed argument among Biden allies and White House veterans about how and whether he should engage the network more fully."

Biden has a history of interacting with parts of Fox News. Wallace interviewed him during the Democratic presidential primary and went on to moderate the first presidential debate between the former vice president and Trump. Some pundits believed that interacting with Wallace was good for Biden's campaign, as he needed to answer tough questions from someone who is conservative-leaning but not an extremist. And former South Bend, Indiana Mayor Pete Buttigieg stressed that Biden shouldn't try to pretend that conservatives don't exist.

Buttigieg told the Beast, "Everyone on our side wonders how 70 million people could have voted for this president with their eyes open. If they believe these 70 million people are evil, then our country is not going to make it. If, on the other hand, you believe they're largely working from different information, or so-called information, than the rest of us, then the real problem is not the character of the voters as it is the nature of the information that's getting to them. Then we have a responsibility to try and change the information they receive."

The former South Bend mayor, in fact, has been willing to appear on parts of Fox News.

"The train has very much left the station as to whether Fox News will be perceived as legitimate by tens of millions of Americans," Buttigieg told the Beast. "That's over. And it happened without us. The time for starving it of oxygen is long gone."

Veitor told the Daily Beast, "You go in there knowing it is not a news network and that it's a Republican propaganda channel. They might play nice in the dayside programming. Chris Wallace might do a decent interview once every few years. But three weeks out from an election, you need to realize it will be wall-to-wall 'ISIS is coming, the caravan is down the street, and they're going to kill your family.'"

With Trump angrily railing against Fox News, Stein and Tani stress, the question for Democrats is: how should the Democratic Party handle the cable news outlet going forward? Buttigieg told the Beast, "It just shows you how far through the looking glass we've come if Fox News is too reasonable and moderate for today's Republican Party." But as Stein and Tani point out, Trump still has plenty of strident supporters at Fox.

Stein and Tani explain, "If an editorial course correction is coming at Fox, it's not yet readily apparent…. Laura Ingraham and Sean Hannity have fully touted Trump's recount efforts, even as the preponderance of evidence shows it to be an abject failure…. And last week, Maria Bartiromo, one of Trump's top allies in the financial media world, gave airtime to a bogus voter-fraud conspiracy theory, and continues to promote debunked claims about election integrity regularly on her show."