Joe Biden says 'we will be the winners' of US election 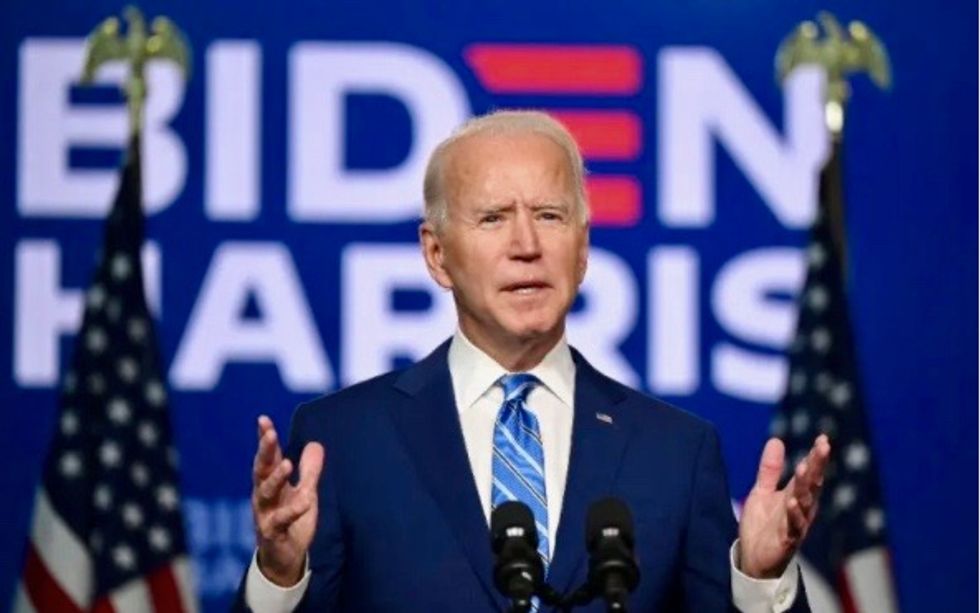 Democrat Joe Biden said Wednesday he was confident of winning the presidency once all votes are counted, saying he was leading Donald Trump in the remaining swing states that will determine the election's outcome.

With results from Tuesday's election showing Biden steadily nearing the threshold necessary to win the White House, Trump has mounted legal challenges in efforts to suspend the counting of ballots or force recounts in battlegrounds that will determine the next president.

"After a long night of counting, it's clear that we're winning enough states to reach 270 electoral votes needed to win the presidency," Biden said in his hometown of Wilmington, Delaware.

"I'm not here to declare that we won. But I am here to report, when the count is finished, we believe we will be the winners," Biden added.

Even as US networks called Michigan -- and its 16 electoral votes -- for Biden Wednesday, the president's campaign announced a lawsuit to try and suspend the vote count in the fiercely contested battleground.

Biden, speaking in a measured and calm tone, pushed back, declaring that "every vote must be counted."

"We the people will not be silenced," he added, as his running mate Kamala Harris stood by his side.

The 77-year-old former vice president spoke about the three Great Lakes states that could be key to a Biden victory, noting he had won Wisconsin by 20,000 votes.

"In Michigan, we lead by over 35,000 votes and it's growing -- a substantially bigger margin than President Trump won Michigan in 2016," he said.

And when it comes to perhaps the pivotal state of the entire election, Biden said, "I feel very good about Pennsylvania."

Trump leads in the Keystone State with 84 percent of precincts reporting. But Biden said the vast majority of remaining ballots to be counted were mailed in, and that he has been winning some 78 percent of the votes by mail in Pennsylvania.

Conspiracy theorists who blamed NFL player Damar Hamlin's cardiac arrest on Covid-19 vaccines have doubled down on their claims despite his speedy recovery, insisting he secretly died in an elaborate cover-up involving deepfake videos and other deceptive means.

On January 22, less than a month after the 24-year-old Buffalo Bills safety collapsed during a game against the Cincinnati Bengals, Hamlin watched the teams' rematch from a stadium suite, with fans cheering his return to the public eye.

Julia Shumway, Oregon Capital Chronicle
One of Oregon’s only Black state representatives was stopped twice by police while driving home from the state Capitol this week, and he says the stops highlight concerns that police profile Black Oregonians.

Rep. Travis Nelson, a nurse and Democrat who represents north and northeast Portland, doesn’t dispute that Oregon State Police had cause to pull him over – he was speeding on Monday night and holding his phone on Wednesday night. Both times, police let him off with warnings.

But Nelson said he’s worried that the frequent stops – he estimates he’s been pulled over more than 40 times since he began driving 25 years ago – are a sign of biased policing.

‘I don’t get canceled, really’: John Waters on his career, conservatives and taboos

John Waters knows what makes a “John Waters movie,” but he isn’t sure movie critics do. “I hate those movies, because they just mean they’re gross, or they have one drag queen in it,” Waters tells me over the crackling receiver on his San Francisco landline. Waters has spent years creating universes where people are as bad as cable television cop shows and the latest conservative talking points would have you believe. You’ve almost certainly heard of him through “Hairspray,” his 1988 film staring Ricki Lake as Tracy Turnblad, an overweight teenage girl who helps integrate Baltimore public tele...