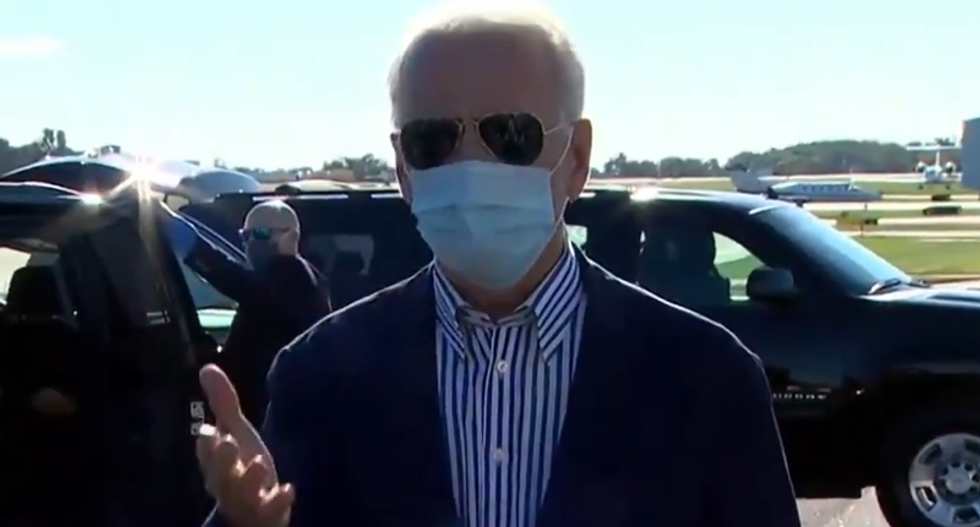 When vice presidential nominee Kamala Harris made an 11th-hour stop in McAllen on Friday, she stressed the importance of the predominantly Hispanic border city and its surrounding region to Democrats.

“There are people here who matter, people who are working hard, people who love their country, and we need to be responsive to that,” she told reporters.

On Tuesday, statewide results confirmed her message, but not in the way her party had hoped. Democrats once again won a large number of counties along or near the Texas-Mexico border, but by a much narrower margin than in recent elections. And that underperformance played a big role in disappointing results up and down the ballot for the state’s Democrats.

In 28 counties in South Texas or near the border, Biden won by a combined 17 percentage points, according to election night returns. That’s about half of Hillary Clinton’s 33-point margin over President Donald Trump across those counties four years ago. Biden’s underperformance was even more pronounced in the Rio Grande Valley, which comprises the four southernmost counties in the state. Biden carried those counties by 15 points after Clinton won them by 39 in 2016.

The relatively poor showing prompted immediate soul-searching by Democrats in the state as politicians, party leaders and voters debated whether the various regions along the border — and Hispanic voters across Texas — have been taken for granted.

“I think there was no Democratic national organizational effort in South Texas, and the results showed,” said U.S. Rep. Filemon Vela, D-Brownsville. “The visits are nice, but without a planned media and grassroots strategy, you just can’t sway voters. When you take voters for granted like national Democrats have done in South Texas for 40 years, there are consequences to pay.”

In perhaps the most stunning result, Trump flipped Zapata County, which lies immediately north of the Valley. Trump carried the small county by 5 points after Clinton won it by 33 in 2016 and Barack Obama by 43 in 2012.

Farther up the Rio Grande, Biden won Maverick County — home to Eagle Pass — by 9 points after Clinton secured a blowout there by 56 points in 2016.

The struggles could also be seen in congressional races, too. In the 23rd Congressional District, which covers a long stretch of border along West Texas, Democrat Gina Ortiz Jones was defeated by Republican Tony Gonzales in a race that many considered the most likely pickup opportunity for congressional Democrats in Texas.

And in a district that stretches from the Rio Grande Valley to east of San Antonio, Monica de la Cruz-Hernandez came within 3 points of upsetting U.S. Rep. Vicente Gonzalez, D-McAllen, for a seat that was considered solidly blue. Gonzalez won reelection by 21 points in 2018.

“Clearly, last night’s election was a phenomena at the top of the ticket that impacted campaigns down ballot across Texas and throughout the country,” Gonzalez said in a statement.

South Texas has long been a Democratic stronghold, but it has never been a liberal bastion. Instead, moderate Democrats often ascend to office and remain there, such as state Sen. Eddie Lucio Jr., D-Brownsville; U.S. Rep. Henry Cuellar, D-Laredo; and former longtime U.S. Rep. Rubén Hinojosa, D-McAllen.

Former state Rep. Aaron Peña of Edinburg was elected as a Democrat in 2002 before switching to the GOP eight years later while in office.

“I’m tired of my community being taken for granted,” Peña told The Texas Tribune in 2010 as he left the Democratic Party.

Vanessa Guerra, a 30-year-old geologist who lives in Penitas, voted for Biden, but said she would have liked to see more outreach from the party.

“Over here, there are a lot of folks that think being a Democrat is the same as being socialist,” she said. “There should have been a campaign making sure people know that they are not socialists. People from Latin America have had socialist leaders, and they are afraid of that happening again.”

By Wednesday, Republicans were bragging about Democrats’ poor showing in the southern part of the state.

“They didn’t do anything in the Valley, and the president crushed them in terms of overperforming” there, said Dave Carney, Gov. Greg Abbott’s chief political adviser. “You look at some of our Hispanic candidates in the Valley running for the House — it was pretty close. There’s not gonna be a recount or anything, but we see real, real, opportunity to continue to grow … the Republican brand.”

In Cameron County, the second-most populous county in the Valley, Biden was leading by only 13 points after Clinton carried the county by 33 in 2016. The Democratic Party chair there, Jared Hockema, said he was “sort of struck with a sense of deja vu from the primary,” when Biden also did not perform well in counties with large Hispanic populations.

Hockema acknowledged Democrats were in need of some soul searching when it comes to Hispanic voters, but he noted that “at the same time, [Biden] expanded our electorate in other directions” statewide.

“We win elections because we build good coalitions,” Hockema said. “I think we brought a lot of new people into our coalition. It just seems some of the people who were already in the coalition didn’t have as much of a part last night, and we’re gonna see why that is.”

Jason Villalba, a former Republican member of the Texas House and president of the Texas Hispanic Policy Foundation, said in an interview Wednesday morning that much of Biden’s relative weakness can be blamed on a lack of outreach.

“Statewide candidates — the John McCains of the world and the Joe Bidens of the world — come to Texas, they spend an hour at a very high-end country club in the RGV, they have a margarita machine and they call it a pachanga, and they call that Hispanic outreach,” Villalba said. “Well, those days are done.

"The only way you’re going to truly win the hearts and minds of Hispanics is to meaningfully engage the community on a personal and consistent basis.”

But not everyone viewed Biden’s showing along the border as a sign of Democratic struggles among Hispanic voters. Ed Espinoza, executive director of Progress Texas, noted on Twitter that the number of people who voted for Biden actually increased in three of the most populous border counties in the state. In each of those counties, the Republican share of the votes also grew, however.

“While border counties in Texas are very Latino they are also very rural - and Trump improved his performance in rural communities by 400k votes across Texas,” Espinoza wrote. “What we’re seeing [in] South Texas looks less like Latinos leaving Biden and more like rural voters flocking to Trump.”

And Tuesday night’s results nationwide showed how Hispanic voters can’t be viewed as a monolith. Biden underperformed among Cuban Americans in the Miami area while building a strong coalition among Hispanic voters in Nevada. But in Texas, Villalba said, the Hispanic voters are much more inclined to be courted by Republicans.

In any case, though, Vela said campaigns cannot count on the Hispanic vote if they are not seriously investing in it.

“Certainly more should have been done, but in a national campaign you have to prioritize resources,” Vela said. “What we are seeing today given the close races in Michigan, Wisconsin and Pennsylvania confirms that decision.”

Disclosure: Progress Texas has been a financial supporter of The Texas Tribune, a nonprofit, nonpartisan news organization that is funded in part by donations from members, foundations and corporate sponsors. Financial supporters play no role in the Tribune's journalism.