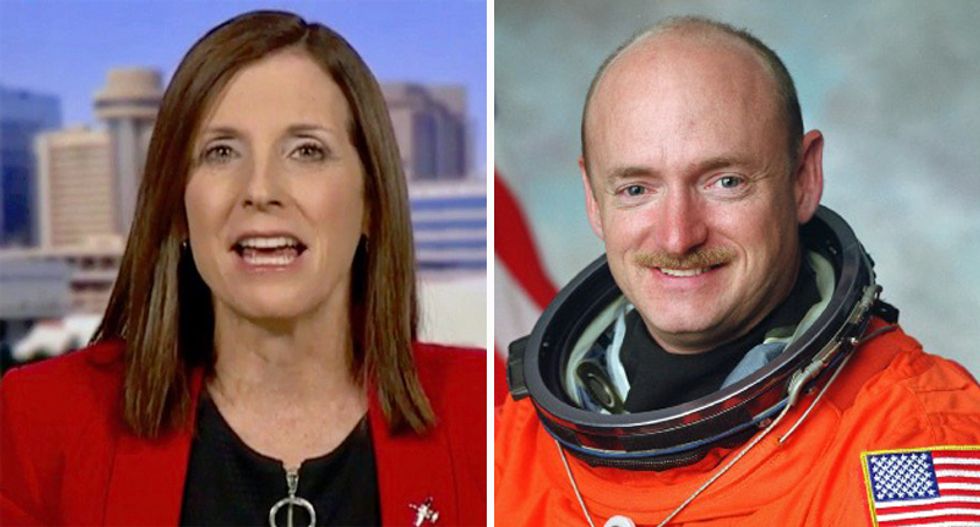 Kelly, a retired astronaut and the husband to former Rep. Gaby Giffords, D-Ariz., ran as a pragmatic liberal. Often posting double-digit margins, he held a wide lead over McSally throughout the year. At one point in early September, Kelly led by 17 points in a Fox News poll.

McSally, never popular in the state, struggled to shake her affiliation with President Trump, at times appearing visibly flustered by the association as Election Day approached. In October, she dodged a debate question about her support for the president, after which Trump belittled her at a rally.

The coronavirus pandemic hit Arizona particularly hard. While McSally tried to tout her work on emergency relief packages, voters continued to hang her star next to Trump's.

As a result, McSally never sustained gains among suburban voters. This was especially true in the key Phoenix suburbs of Maricopa County, where local polls once showed her down 20 points after anti-Trump conservative super PAC the Lincoln Project ran attack ads this spring.

That county had been a Republican stronghold until 2018, when moderate Democrat Kyrsten Sinema beat McSally there among GOP voters. Despite the loss, McSally still became a U.S. senator after Gov. Doug Ducey, a Republican, appointed her to replace GOP Sen. Jon Kyl. The outgoing legislator had earlier been appointed to fill the seat left open by the late Sen. John McCain, R-Ariz., upon his death in 2018.

McSally is the only senator in U.S. history to lose her election bid but still score a Senate seat.

McSally had a difficult time trying to distinguish herself from Kelly, who ran a campaign aimed at furthering Sinema's inroads with moderate Republicans turned off by Trump's incivility. Kelly embraced pragmatic versions of liberal platforms, such as a public healthcare option and climate change legislation geared at jumpstarting the renewable energy industry.

Both candidates were veteran military pilots. McSally was the first woman combat pilot, and Kelly was a heavily decorated naval aviator deployed to the Persian Gulf during Operation Desert Storm. NASA later recruited Kelly and his twin brother, and Kelly flew a number of space shuttle flights before retiring from both NASA and the Navy in 2011.

That same year, a gunman targeted Giffords, Kelly's wife, in a mass shooting assassination attempt at a constituent event outside of a grocery store. Giffords, who was shot in the head, sustained severe brain damage, and Kelly, a former firearms owner, became a vocal advocate for stronger gun regulations. The couple launched a gun-control advocacy group together in 2013.

At the same time, Kelly, the son of two police officers, bridged the gap between stronger gun laws and support for Second Amendment rights while evading GOP broadsides amid the Trump-led "law and order" attacks on Black Lives Matter protesters over the summer.

"Our rights and traditions are so important. [The] Second Amendment is so important," he said during an Oct. 7 debate. "But we can never let a bunch of kids in [their] classroom, you know, get killed and think there's nothing we can do about it."

The Copper State's demographics have shifted with the introduction of younger voters who tend to favor Democrats, as well as an influx of Latinx voters, securing the state's status as a toss-up.

Sinema, who upset McSally in 2018's special election, took over the seat formerly held by Republican Sen. Jeff Flake, a staunch conservative who at times criticized Trump and endorsed Biden's candidacy. Until Sinema, Republicans alone had represented the Copper State in the Senate since 1995.

A Democratic presidential candidate has not won Arizona since former President Bill Clinton carried the state in 1996.