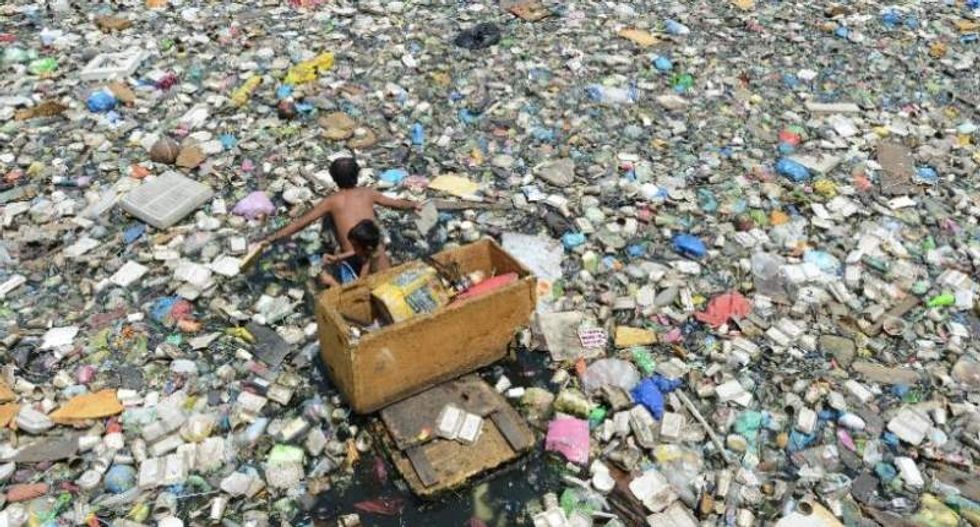 A father and son (L) on a makeshift boat made from styrofoam paddle through a garbage filled river as they collect plastic bottles in Manila on March 19, 2015. (Agence France-Presse/Noel Celis)

Despite being one of the world's biggest contributors to plastic pollution, the U.S. has so far shown no signs of joining an international treaty aimed at stopping plastics from flowing into the world's oceans and other natural habitats—leaving the country in a small minority as more than two-thirds of United Nations member states signal that a treaty is forthcoming.

At a virtual conference attended last week by the U.N.'s working group on ocean pollution and microplastics, countries in Africa, the Pacific, the Baltic region, and throughout Europe confirmed that they are open to signing a treaty aimed at sharply reducing marine plastic pollution and potentially all plastic waste.

The U.S. was joined by the United Kingdom in declining to participate in the treaty, although the two countries are the biggest per capita plastic polluters in the world. British environmental minister Zac Goldsmith is expected to announce soon whether the country is open to a new treaty or to strengthening the existing international framework governing plastic pollution, while the Trump administration has indicated it is not open to a global treaty on plastics.

@ZacGoldsmith @DefraGovUK do the responsible thing for our global ocean and sign us up, please!
— Hannah Rudd (@Hannah Rudd) 1605520052.0

"Support for a global treaty on plastic pollution is a critical action that the Biden administration can take to correct the wrongs of the Trump era," Tim Grabiel, senior lawyer at the Environmental Investigations Agency (EIA), told The Guardian on Monday. "Over the last four years, we have continually encountered opposition from the Trump administration to truly address plastic pollution, slowing down progress and watering down international efforts. We are hopeful that, with a change in leadership at the top, the U.S. will join its allies and support a global treaty on plastic pollution at [the U.N. Environmental Assembly's 5th conference]."

The EIA has called for a legally binding global agreement including four pillars to combat plastic pollution from all sources. The group says any treaty ultimately agreed upon by U.N. countries must include:

Coordination between existing anti-plastic pollution frameworks including the 2001 Stockholm Convention, under which countries agreed to limit or ban the use of certain toxic chemicals including some used in plastics, and the 1989 Basel Convention, which aimed to reduce hazardous waste production and the transboundary movement of such waste

Technical and financial support for developing countries from wealthier countries

The U.N. Environmental Assembly concluded in 2017 that the Stockholm and Basel Conventions are "fragmented and ineffective" as they are currently implemented, according to The Guardian. The U.S. is only a party to the Basel Convention.

The assembly is currently expected to meet in Kenya in February 2021 for its fifth conference, or in 2022 if the summit is postponed due to the coronavirus pandemic.

Even without the participation of the U.S. and U.K., the EIA called the commitment of a majority of U.N. countries to a new treaty "heartening."

"Maintaining the status quo is not only untenable, it would have catastrophic implications for planet Earth," Christina Dixon, senior ocean campaigner at EIA, told The Guardian.

As the U.N. working group was meeting last week, the World Wildlife Federation (WWF) circulated a petition—signed by two million people so far—calling for a global anti-plastic pollution treaty.

"We are drowning in plastic, but we can resurface," the WWF tweeted. "World leaders urgently need to vote for a U.N. treaty to tackle this crisis."