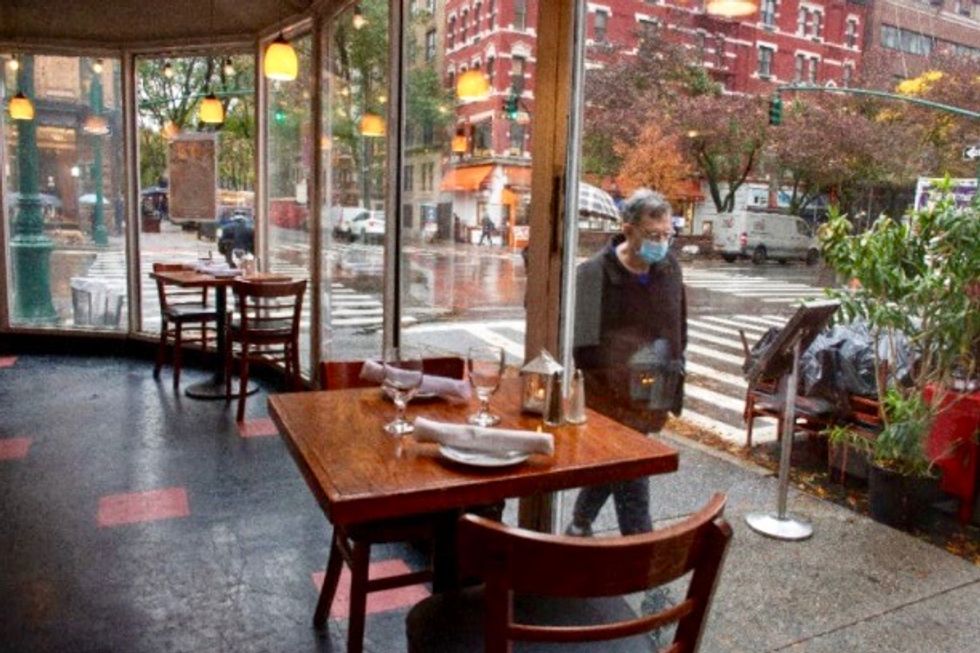 A swathe of new restrictions to cut off a second wave of coronavirus infections came into force in European nations on Saturday after New York closed bars and the global death toll climbed above 1.3 million.

Infections have flared throughout America and Europe, with governments forced to take more drastic action despite the potential devastation of their economies.

Greece, battling a saturated national health system, has shut down all schools and imposed a nationwide night curfew from Friday.

The government announced the closure of primary schools, kindergartens and daycare centers, with secondary schools already closed and all lessons online since Monday.

"Closing elementary schools was the last thing we wanted to do. This is a measure of how serious the situation is," said Health Minister Vassilis Kikilias on Saturday.

In Italy, Naples plunged into the "red zone" of tough restrictions on a total of seven regions, or 26 million of the 60 million population.

The latest decree was signed late Friday with Health Minister Roberto Speranza saying "there is no other way if we want to reduce the numbers of dead".

Bars and clubs in the Big Apple, the epicenter of the US's spring outbreak, were ordered to close at 10 pm on Friday. The state governor warned schools could move to online only teaching as early as Monday.

The United States, the country hardest hit by COVID-19, meanwhile saw 188,858 more cases and 1,596 more deaths Friday, according to a tally from Johns Hopkins University.

New antivirus curbs also came into force in Ukraine on Saturday, with all non-essential businesses ordered to stay closed for the weekend.

Officials in Kiev pulled back from a nationwide lockdown, admitting an already-battered economy could not stand it.

And Lebanon entered a new two-week lockdown after infections crossed the 100,000 mark, with hospitals in the crises-wracked country almost at capacity.

Lifting the gloom, the European Medicines Agency added to growing hopes that an effective vaccine is coming soon, saying the EU body expected to give a favorable opinion on a vaccine by the end of the year. That would allow distribution from January.

In India, the pandemic and chronic pollution cast a shadow over Diwali celebrations for hundreds of millions on the biggest Hindu holiday of the year on Saturday.

Diwali is meant to be the festival of light, but in the smog-shrouded capital New Delhi firecrackers were banned and while people still thronged markets, traders said Covid-19 had scared shoppers off spending.

With 8.7 million cases, India has the world's second-highest coronavirus infection count behind the United States.

The disease has claimed more than 1,305,000 lives worldwide and infected 53.4 million since it first emerged in China in December.

The lights were off at Vineet Garg's gold and jewelery store near Delhi's Connaught Place, despite an "open" sign.

"It is a waste of electricity to put the lights on," he said. "People are not buying in shops... They are too worried to have fun."

"It is a dull Diwali," said Raju Harijan, 35, who has a food store in Mumbai.

Even with a vaccine expected soon, a top WHO expert issued a sober warning that growing public distrust and misinformation could make effective treatments useless against the pandemic.

"We are not going to be successful as a world in controlling the pandemic with the use of vaccines as one of the tools unless people are willing to get vaccinated," Kate O'Brien, head of the WHO's immunization department, told AFP.

Those fears were echoed in France on Saturday as Prime Minister Jean Castex sketched out plans to have to deal with the virus in the long term.

"My fear is that not enough French people will get vaccinated," he told Saturday's Le Monde newspaper.

French restaurant and bar owners have announced legal action against government measures which closed them down from the end of October. Two out of three restaurants risk going out of business by the end of the year if the closure is not lifted, unions said.

In his first public address since being declared the loser of the November 3 election, Donald Trump on Friday touted medical breakthroughs that happened under his watch but said he remained firmly against new lockdowns.

He predicted a Covid-19 vaccine developed by Pfizer and BioNTech, which the companies have said is 90 percent effective in trials so far, would receive emergency approval "extremely soon."

"Thanksgiving will undoubtedly lead to a massive new explosion of cases if people don't take it seriously," said Michael Mina, a Harvard epidemiologist.