Officials at law firms representing Trump are balking at his efforts to overturn elections: report 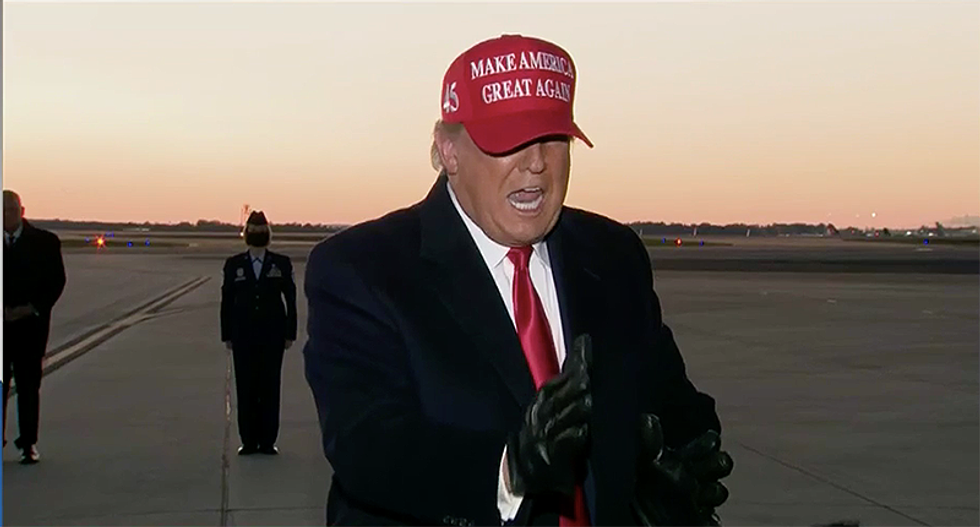 On Monday, The New York Times reported that senior officials at multiple law firms representing President Donald Trump's campaign in their lawsuits against the election counts are increasingly uncomfortable with their legal teams being used to advance arguments to undermine the legitimacy of the vote.

"Some senior lawyers at Jones Day, one of the country’s largest law firms, are worried that it is advancing arguments that lack evidence and may be helping Mr. Trump and his allies undermine the integrity of American elections, according to interviews with nine partners and associates, who spoke on the condition of anonymity to protect their jobs," reported Jessica Silver-Greenberg, Rachel Abrams, and David Enrich. "At another large firm, Porter Wright Morris & Arthur, based in Columbus, Ohio, lawyers have held internal meetings to voice similar concerns about their firm’s election-related work for Mr. Trump and the Republican Party, according to people at the firm. At least one lawyer quit in protest."

Trump has had ties to Jones Day going back years, with one of the legal partners, Don McGahn, going on to serve as the president's White House counsel and an adviser in his judicial appointments.

The president has challenged results in several states, including Georgia, Pennsylvania, and Nevada, all of which show growing leads for Joe Biden as the final votes are counted.

"In recent days, Mr. Trump and his allies have been trying to raise money to bankroll their legal efforts. Some of the fund-raising entreaties have noted that a portion of donated money might be used to pay down the campaign’s existing debts, rather than to fund new legal efforts," said the report. "While it is not clear which law firms will be filing the suits, Jones Day has been one of Mr. Trump’s most steadfast legal advisers."