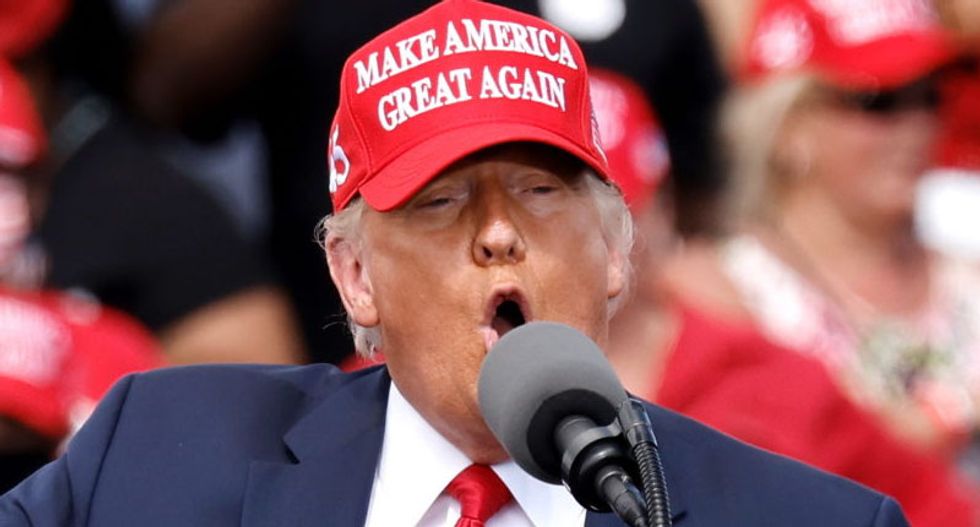 President Donald Trump speaks at Raymond James Stadium in Tampa, Florida. (StratosBril / Shutterstock.com)
The right-wing trolls behind the baseless "Stop the Steal" election fraud movement have launched a political action committee (PAC) to cash in on the false claim that the election was rigged against President Donald Trump, according to a filing posted this weekend on the Federal Elections Commission (FEC) website.

The organization, called Stop the Steal PAC, shows signs of being what campaign finance watchdogs know as a "scam PAC" — a for-profit fundraising vehicle that professes to support a cause but in reality ends up pocketing most of the money for its members, or shuffles it off to contracted firms.

Stop the Steal PAC's treasurer, Patrick Krason, and his wife Crystal are affiliated with a number of these small-time PACs. For instance, Krason also launched the Draft Sarah Huckabee Sanders for Arkansas PAC, but lives in West Virginia, had never visited Arkansas and had no connection to the former White House press secretary or her family.

"[Neither] Sarah nor anyone connected to her has ANYTHING to do with it," Huckabee told the Arkansas Democrat-Gazette. "The person who launched it is unknown to everyone in Sarah's family, her political orbit, or her circle of friends."

Earlier this year a conservative watchdog group filed an FEC complaint against a Krason-led "social welfare" charity called the Stronger America Fund, alleging that he had unlawfully coordinated with a congressional campaign he was working on at the time.

Several of Krason's other PACs say they aim to legalize marijuana, and others — such as Make Virginia Great Again and MAGA Coalition — draw on familiar-sounding Trump-world phraseology. He also appears to have chiefly paid his own firms through campaigns, FEC filings show.

While Stop the Steal's FEC filing lists an address in Washington, D.C., it's only a drop box — Krason's actual office is in Charleston, West Virginia. The group's phone number is different from the one listed on Krason's own website, and directs calls to a Google subscriber mailbox after one ring.

Krason told Salon in a phone interview that while he had handled federal compliance for Stop the Steal, it was not his PAC, but would not disclose the client.

In addition to Krason, the PAC's registration with the FEC lists a man named Daniel Bostic as a designated agent.

Bostic's 54,000-follower verified Twitter profile says he is a former model and congressional staffer, a reference to his "full-time" work in the Washington office of then-Rep. Tim Scott, R-S.C., as a homeschooled South Carolina 17-year-old. (Scott is now a U.S. senator.) The 20-something activist also claims a producer credit on a recent documentary about the widely-mocked efforts of Rep. Devin Nunes, R-Calif., to discredit the Russia investigation. Bostic is an active member of the Stop the Steal movement, which he heavily promotes on social media.

But Bostic is just one of a number of MAGA-world second-stringers who appear to see Stop the Steal as a way to ride the fantasy of a stolen election into a future of relevance, influence and income after Trump departs the White House.

While the movement's name may suggest a reaction to the 2020 election, its roots trace to the 2018 midterms — and specifically Florida Republican Sen. Rick Scott's 2018 narrow victory over then-incumbent Democrat Bill Nelson. That was when Roger Stone launched the group as a coda to the "Brooks Brothers riot" of 2000.

At the time, Stone had the help of a far-right operative and conspiracy theorist named Ali Alexander, an itinerant provocateur who signed on to recruit for the "Stop the Steal" campaign and appears to be the organizing force behind this year's post-Trump iteration.

Alexander's current approach echoes the eclectic appeal he envisioned in a Periscope video in 2018, as reported in Right Wing Watch, where he hoped to motivate not just Republicans, but QAnon followers, Democrats and "homeless people in all the adjacent counties" to keep an eye on the vote count.

But Alexander, formerly known as Ali Akbar, has a checkered history even by the loose standards of the alt-right movement, and today he does not have the full confidence of MAGA-world, some of whom suspect him of being a disingenuous grifter.

As Ali Akbar, he was convicted of theft and credit card fraud in 2007 and 2008. He entered national politics as a John McCain campaign staffer in 2007, when he was apparently reprimanded — ironically enough — for discussing opportunities to committing voter fraud during the Republican primary campaign. (Former McCain campaign officials contacted by Salon did not recall him, or the alleged incident.)

More recently, in the final weeks of the 2016 campaign, a PAC affiliated with Alexander got a $60,000 injection from billionaire far-right financier Robert Mercer. The next year he popped up amid the Unite the Right controversy, and in 2018 tried to help kickstart a short-lived Trump-centric alternative to the annual Conservative Political Action Conference (CPAC), called the American Priority Conference. He followed that up with an ill-fated joint troll operation in Minneapolis with right-wing personality Laura Loomer and indicted felon Jacob Wohl.

Today, Alexander is the organizing force behind Stop the Steal, which last weekend organized demonstrations in several U.S. cities to protest President Trump's defeat. The demonstrations served a dual role as promotional platforms for a hodgepodge of conservative and alt-right media personalities — e.g., Jack Posobiec, Mike Cernovich, Scott Presler and Amy Kremer — described in a Mother Jones profile of the event as "a collection of disgraced right-wing internet figures."

Their rhetoric and messaging has been amplified by Trump himself and his high-profile allies, who have repeatedly peddled baseless claims that Democrats have "stolen" the election, making unfounded allegations about "missing" military ballots, "illegal ballots" and chicanery in vote-counting sites in multiple key battleground states.

The Stop the Steal PAC was born on Saturday, the day of the scheduled protests. That also coincided with a change to the group's website, which appears to have removed its "donate" button after it was revealed that contributions went straight to Alexander's personal accounts, including his PayPal, CashApp and Amazon Wishlist.

Given the warring factions within TrumpWorld, Stop the Steal's future as a cohesive movement appears tenuous, especially without the bonding agent of Trump at the top of U.S. politics. Alexander's apparent cash grab has already begun to draw fire from inside the tent. While the movement may now have the imprimatur of an officially FEC-registered PAC, the name defines the mission. There are two years ahead with no steal to stop.