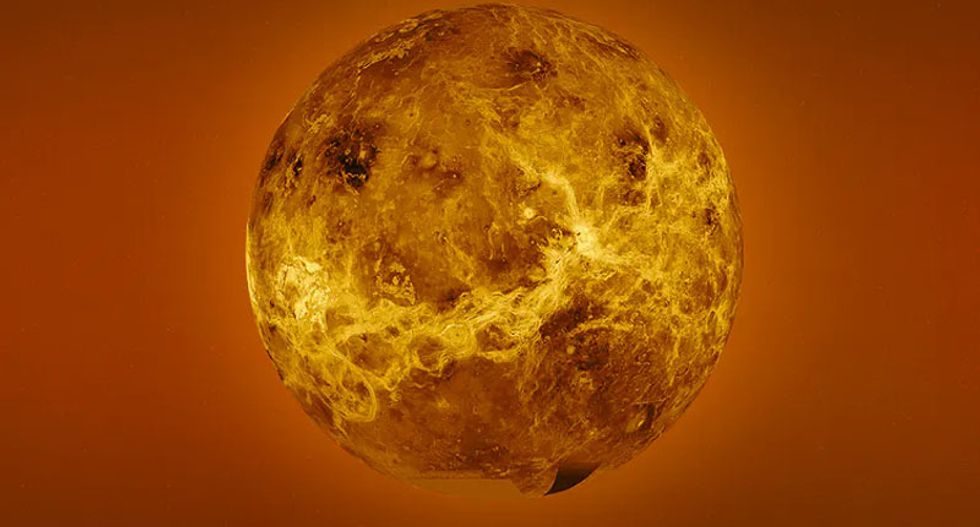 In September, news about the possibility of floating, cloud-based life on Venus caused a storm in the science world as tumultuous as the sulfur clouds that rain acid down on the second planet from the Sun.

A paper published in Nature Astronomy by a group of international astronomers explained how they detected phosphine (PH₃), a gaseous molecule composed of one phosphorus and three hydrogen atoms, in the upper atmosphere of Venus. Researchers saw phosphine's signal in spectrograms from two radio telescopes they used to capture the data, and estimated there were 20 parts per billion of the compound in Venus' clouds.

This discovery, the astronomers stated, was believed to be a "promising" sign of life, as phosphine on Earth is created in the gaseous emanations of anaerobic life. Could it be that, high above among the mountains, craters, thousands of volcanoes and thick atmosphere, little microbes flitted about the Venusian sky?

"If no known chemical process can explain PH₃ within the upper atmosphere of Venus, then it must be produced by a process not previously considered plausible for Venusian conditions," the authors of the paper stated. "This could be unknown photochemistry or geochemistry, or possibly life."

On Earth, phosphine is produced as a waste byproduct of simple anaerobic bacteria, and they are a notorious signature of the uncommon gas. The researchers struggled to figure out any other way that the gas could be produced on Venus, geologically or in the atmosphere somehow, but came up empty.

But quickly after astronomers published the initial paper, more research papers followed questioning the observation of phosphine—both its presence and the abundance of the compound. In one critique of the original study, researchers suggest that the signs of phosphine were coming from another common gas in Venus' clouds, sulfur dioxide, which has a similar spectrogram. Another critique focused on how difficult it is to extract a phosphine signal out of the data that the initial group of researchers used, according to Nature. Subsequently, the same team of astronomers of the initial paper re-examined their data and cited a processing error and recalculated its estimate to 5 parts per billion. In other words, if there's phosphine there likely isn't as much of it. Their results were published in a preprint posted on 17 November to arXiv.

So, does that mean that life on Venus has been ruled out?

"If phosphine indeed exists at the claimed abundance of ~5 ppb [parts per billion], then this abundance is still orders of magnitude larger than what one can get out of plausible volcanic activity on the planet based on what we know from Earth," Harvard astrophysicist Avi Loeb told Salon over email. "But although we know that phosphine originates from life on Earth, we do not fully understand the detailed path by which it is produced (namely which microbes make it and how)."

Loeb said there is still a lot of research that needs to be done in order to land on a definitive answer to whether or not there's life on Venus or not— like going to Venus and collecting some microbes in a probe, say.

"We will not be convinced that life exists on Venus until microbes are found by scooping the Venusian clouds," Loeb said. "The claimed detection of phosphine plays the important role of motivating a mission that will go there."

Notably, Loeb added that the over-reported estimate of phosphine wasn't a "mistake."

"I would not call it a mistake but an overestimate, for now, until proven wrong by better data," Loeb said.

As luck would have it, NASA's DAVINCI+ (Deep Atmosphere Venus Investigation of Noble gases, Chemistry, and Imaging Plus) mission is one contender to study the upper atmosphere of Venus. According to Forbes, NASA is due to make a decision next year on whether or not the mission will move forward. If phosphine is indeed abundantly present in Venus' atmosphere, this mission would be able to detect it.

"DAVINCI+ will measure the compositional and dynamic context for interesting gases such as phosphine—and likely others not yet discovered," Dr. James Garvin, Chief Scientist at NASA's Goddard Space Flight Center in Greenbelt, Maryland, and the principal investigator of DAVINCI+, told Forbes. "We do not have enough information to rule out more exotic processes potentially responsible for unanticipated phosphorous gases such as phosphine; DAVINCI+'s proposed measurements could directly provide essential chemical context."

NASA hasn't paid much attention to Venus since the 1990s, when the Magellan mission mapped out the planet's surface. But as Loeb told Salon, the "claimed detection" of phosphine "plays the important role of motivating a mission that will go there."

In other words, the planet Venus could be undergoing its own kind of renaissance in the planetary science world.

When asked if there's more potential interest in missions to Venus, Loeb said "definitely." He added that the original report inspired members of his own research group to write two more papers on the subject.

Therese Encrenaz, an astrophysicist at LESIA, Paris Observator, told Salon via email that she is convinced that "there are still many open questions regarding the photochemistry and meteorology of its atmosphere."

"Venus has been forgotten for too long, relative to the space exploration of Mars," Encrenaz said. "There is no need for phosphine to be interested in Venus! I am very happy to see potential space missions on Venus being in the competition for future selections, at ESA [European Space Agency] and NASA; I hope at least one of them will get selected."

As Noam Izenberg, a planetary scientist at Johns Hopkins Applied Physics Laboratory and deputy chair of NASA's Venus Exploration Analysis Group, previously told Salon, even if there ends up not being phosphine or life on Venus, the search alone "highlights how much we don't know about Venus, and that fundamental new discoveries [...] await us next door."