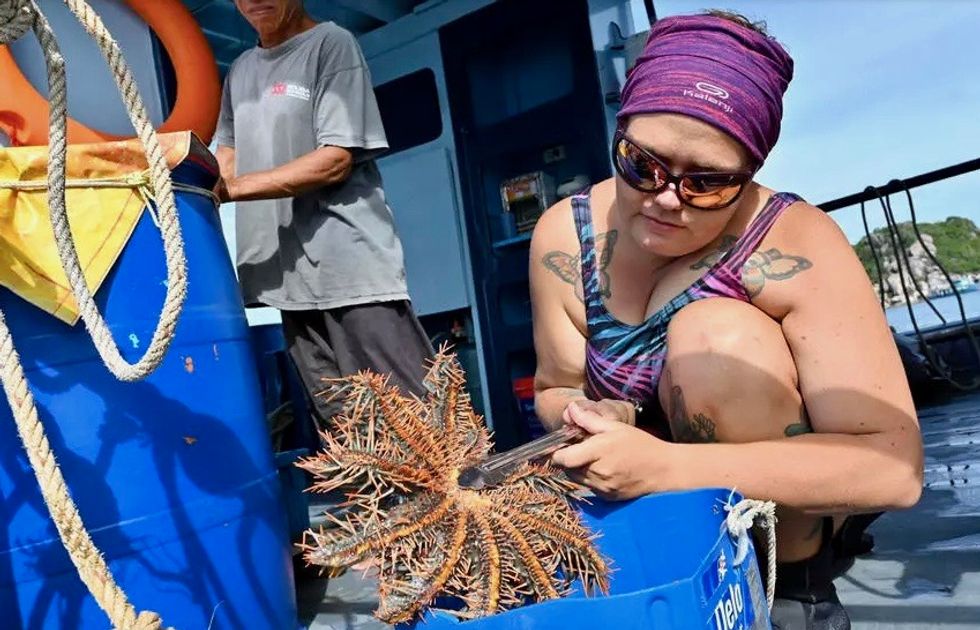 Crown-of-thorns starfish suck the colour and life out of corals, a favourite food, but in a healthy ecosystem their numbers are held in check Romeo GACAD AFP/File

The discovery that coral-eating starfish are late risers and feed mostly at night could help slow the decline of the Great Barrier Reef and other shallow-water corals already ravaged by global warming, scientists reported Wednesday.

Crown-of-thorns starfish suck the color and life out of corals, a favorite food, but in a healthy ecosystem their numbers are held in check.

When marine heatwaves bleach large swathes of coral, however, bigger fish leave the area and the spiky multi-armed predators proliferate and zero in on what's left.

"Mass-bleaching, outbreaks of crown-of-thorns starfish, and a myriad of other disturbances and pressures are leading to widespread coral loss and degradation of reef ecosystems," James Cook University professor Morgan Pratchett told AFP.

Efforts to manually remove the ravenous starfish have largely failed, in part because they are not always easy to find.

But a study published in the Royal Society's Proceedings B has found a chink in their spiky armor which could help scientists buy time for the world's embattled reefs.

"The starfish appear to sleep in, and will be harder to find on the reef before about midday," lead author Scott Ling, also from James Cook University, explained.

That means they would be most active and exposed after the Sun goes down, Ling said.

But the logistics of scooping them up during night dives are daunting.

"We recommend culling dive efforts be focused from midday until early evening," he added.

Crown-of-thorns starfish have a special liking for Acropora, a coral species that has been the foundation for reefs across the world for the past two million years.

- A lifeline for corals -

But the main threat to coral reefs -- on which half-a-billion people and a quarter of marine species depend -- remains climate change.

Increasingly severe marine heatwaves cause healthy corals to expel algae living in their tissues, draining them of their vibrant colors in a process known as bleaching.

Half of the Great Barrier Reef's corals have died over the past 25 years.

The remaining healthy coral are red meat, so to speak, for famished starfish.

In the study, Ling and colleagues showed that the crown-of-thorns species -- like sea urchins -- forage for food and then find shelter before daybreak.

If the feast is close to home, they don't roam.

But if the pickings are slim, they will wander up to 20 meters and then find their way back, a pattern known as homing behavior.

The UN's climate science advisory panel, the IPCC, has found that 1.5 degrees Celsius of atmospheric warming above pre-industrial levels would doom 90 percent of the world's shallow-water corals.

A 2C rise would spell their near-complete demise.

Loss of coral reefs around the world would double the damage from coastal flooding, and triple the destruction caused by storm surges, according to a study last year.