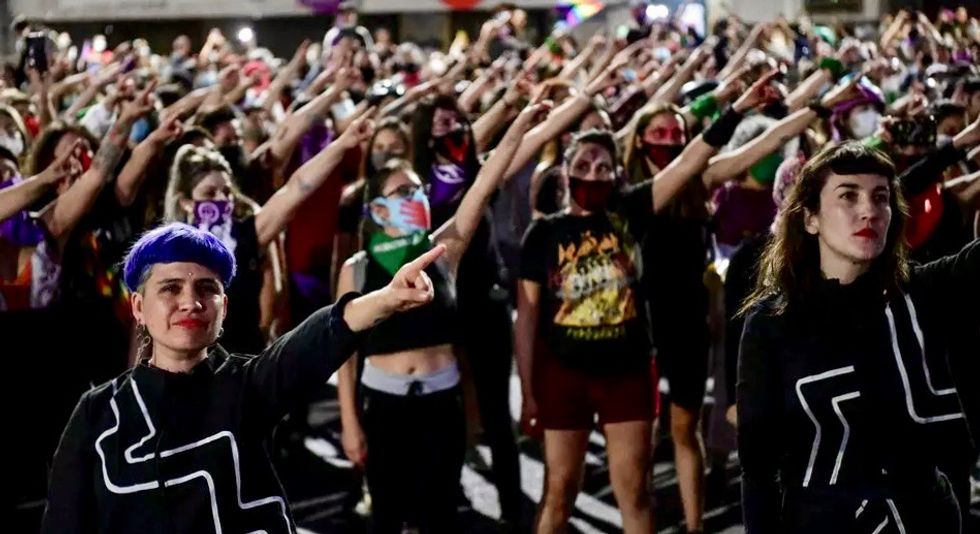 Members of the feminist group Las Tesis, authors of the performance piece "A Rapist In Your Way," take part in a demonstration during the International Day for the Elimination of Violence against Women in Santiago, Chile, on November 25, 2020 MARTIN BERNETTI AFP

Thousands of women gathered in one of Santiago's main plazas on Wednesday and performed the feminist anthem "A Rapist In Your Path" to mark the UN's International Day for the Elimination of Violence against Women -- before Chilean police violently dispersed them.

Created by Chilean feminist collective Las Tesis and first performed in 2019, the song condemns men who attack women and is accompanied by dance moves.

Four members of Las Tesis led the performance, which has been copied and translated into different languages by women around the world.

The crowd was able to complete the performance only once before police deployed a water cannon to disperse the demonstrators from the Plaza Italia in downtown Santiago.

Earlier Wednesday, women's groups demonstrated in Santiago demanding an end to the male violence. Barricades were set on fire and a store was looted.

"We believe that violence against women is part of a structural state violence and of the neoliberal patriarchal system to which we are subjected in this country," feminist lawyer and demonstrator Florencia Pinto told AFP.

The demo was one of dozens around the world protesting violence against women, from Istanbul to Paris to Mexico City.

The demonstrations were given new urgency by an alarming rise in violence targeting women around the world since the start of the coronavirus pandemic.

Venezuela documented 228 femicides in 2020 -- 159 of which came after virus lockdowns began in mid-March, according to the Monitor de Femicidos.

"We are being murdered," a crowd of women protesting in the capital Caracas chanted.

A large crowd of women and their supporters also marched in Mexico City, including native women, trans women, and relatives of people who have been murdered or have vanished during the country's drug war.

"Let's not forget that while violence is what unites us, that violence turns into something much stronger which is dignified feminist outrage," one of the marchers, 27 year-old college student Luky Coutino told AFP.