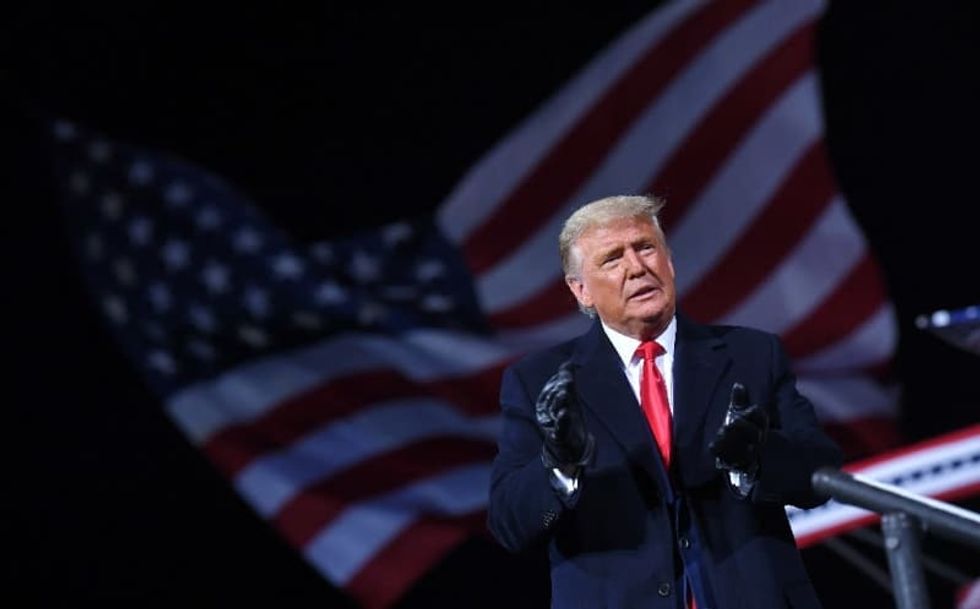 Donald Trump visits five swing states Sunday in a punishing finale to a frantic weekend sprint against challenger Joe Biden just days ahead of the US presidential election.

The candidates and their top surrogates barreled through crucial states in the industrial Midwest and coastal southeast on Saturday, pressing closing arguments.

Trump will rally voters Sunday with an exhausting schedule in toss-up states Michigan, Iowa, North Carolina, Georgia and Florida while Biden focuses on Pennsylvania, a key battleground likely to play a crucial role in Tuesday's election.

Underscoring the high stakes -- and the disruptive impact of the coronavirus pandemic -- a record 92 million early votes have already been cast, as the bruising contest heads toward the biggest turnout in at least a century.

Using some of his most urgent language yet, Trump warned Saturday of "bedlam in our country" if no clear winner emerges quickly in the election, saying, without evidence, that it could take weeks to sort out a result and that "very bad things" could happen in the interim.

Biden meanwhile told backers it was "time for Donald Trump to pack his bags and go home."

The virus has killed more than 230,000 Americans, ravaged the world's largest economy and is infecting record numbers of people across the US.

The election takes place in a deeply divided country, with feelings so raw that gun sales have surged in some areas. Businesses in some cities, including Washington, are protectively boarding windows, and police are preparing for the possibility of violence.

Trump focused Saturday on Pennsylvania -- "the state where the story of American independence began," he said in the small city of Newtown, the first of four stops in that state amid a frenetic final sprint.

Biden made his first joint appearance of the campaign with his former boss Barack Obama -- probably the most popular Democrat in the country -- in Flint, Michigan as they scrambled to boost turnout in a state Trump carried by a razor-thin margin in 2016.

Pennsylvania has emerged as one of the top prizes this year.

In his motorcade en route to rural Bucks County, the president passed hundreds of supporters holding up a forest of pro-Trump signs. The crowd then booed trailing vehicles that were carrying reporters, a regular target of Trump's attacks.

In remarks he lashed out at Biden, saying he would shut down the state's fossil-fuel industry.

Despite recent signs of recovery from the virus-induced economic pain, however, millions remain jobless.

The campaign has been overshadowed by the surging pandemic, which even sickened Trump and members of his staff.

Stanford University economists estimated in a study out Thursday that 18 of Trump's campaign rallies had resulted in more than 30,000 coronavirus cases and more than 700 deaths -- although not necessarily among attendees -- based on statistical modeling.

In stark contrast to Trump, who has belittled mask-wearing by Biden and others, the Democrat has scrupulously followed the guidance of public health experts.

After Biden and Obama appeared Saturday before a socially distanced drive-in rally in Flint, they made an unannounced stop in suburban Bloomfield Hills before heading to Detroit, where they were joined by superstar singer Stevie Wonder.

Biden leads in the state by nearly seven points, according to a RealClearPolitics average of polls. Michigan's 16 electoral votes could provide a sizable leap towards the 270 needed to win the White House.

Trump, in eking out his 2016 victory, took advantage of low turnout rates among Black Michigan voters. As Biden campaigns with the nation's first Black president, he clearly hopes to change that.

Obama pulled few punches in Flint and Detroit, saying 140,000 American lives would have been saved if the president had taken an approach to the pandemic similar to Canada's.

"This is not a contest of just calling each other names," Obama said.

"This isn't a sporting event. This is life or death."

Biden said "we're done with the chaos, the tweets, the anger, the failure, the refusal to take any responsibility."

Biden's campaign announced he will address the nation on election night from his home base of Wilmington, after a vote that will undoubtedly leave millions bitterly disappointed, no matter who wins.

After a campaign largely muted by the pandemic, Biden has taken the offensive, pushing Trump onto the back foot in unexpected battlegrounds like Georgia and Texas, a large, traditionally conservative bastion now seen as a toss-up.