Trump made his predictable authoritarian move -- and it flopped 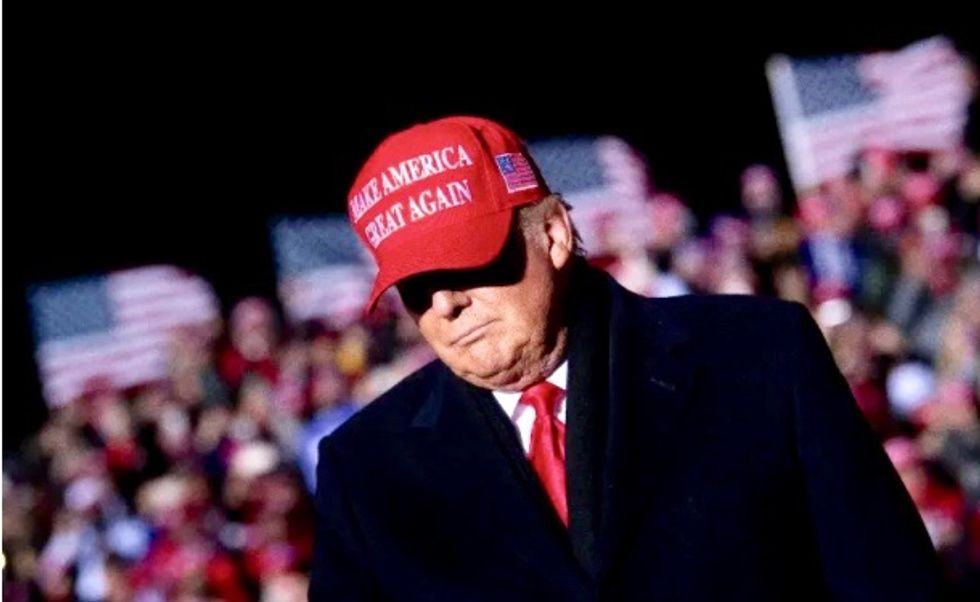 In a normal world, the outcome of the presidential election would just be a matter of math at this point. Joe Biden and Kamala Harris seem to have won the election.

Note the use of “have won.” It’s past tense. Americans are no longer voting in the presidential election. Americans are counting the last of the votes. So, when mainstream media report that a candidate can still pick up an undeclared state, it’s imprecise language. Something like “we’re learning that Biden won Wisconsin” -- which was just called by the networks -- would have been more accurate than implying he won it on Wednesday after the election.

Donald Trump, who is mad, made his predictable move in the wee hours this morning: He declared victory based upon obviously shaky leads in a handful of states that his campaign surely knew were lost. This was straight from the authoritarian playbook.

In particular Wisconsin, Arizona and Michigan were highly likely to have had been won by the Democrats at the very moment Trump was claiming falsely that he had won them based upon holding a lead in partial vote totals.

Trump’s demagoguery was like a baseball manager declaring victory on TV going into the bottom of the 9th inning of a game with his team one run ahead. Admittedly, the analogy breaks down here: Biden probably already scored the two runs he needed to win, it just hasn’t gone up on scoreboard.

With 43 states called, Americans wait impatiently to find out who has won the remaining seven states. Again, it’s about counting and math, despite Trump’s pathetic claim that finishing the count was fitting and proper in states where he was trailing (Arizona and Nevada) or unstoppable (Alaska), but constituted fraud in those where he was clinging to a perishable lead: Wisconsin, Michigan, Pennsylvania, North Carolina and Georgia.

For Trump, it was the electoral equivalent of a Clorox moment when he uttered his 3 a.m. diatribe that only Arizona should be counting its uncounted votes. But after four years of this moron, most Americans watching just went to bed shaking their heads .

As for the remaining math, it looks as if it might come down to a scenario first reported here at Raw Story eight days ago. Here’s the post from October 27, made in the context of Trump’s decision to visit Omaha in search of its single electoral vote:

“Biden comes into the race with the 232 electoral votes won by Hillary Clinton in the bank. They’re not going anywhere. The two most likely electoral hauls for Biden to flip back to blue from Trump’s stash are Michigan’s 16 votes and Wisconsin’s 10. That brings Biden up to 258.

The next most likely Biden flip is Pennsylvania’s 20 electoral votes, which would represent game, set, match and put him up to 278 if he can restore the old Blue Wall in the Rust Belt. But while Biden seems to have a solid lead in the state, Trump is throwing everything at winning the state, including a full-fledged plan of cheating to win by tying up results in court and hoping that the state’s Republican legislature will do his dirty work in the end.

So, let’s say that happens, and Trump and the Republican steal Pennsylvania like it was some seat on the U.S. Supreme Court. In that event, guess what’s the next most likely red state for Biden to flip, pretty much by consensus opinion of pollsters and experts?

Why, it’s Arizona, where Biden is leading in the race for its 11 electoral votes. And guess what? Those 11 votes added to Clinton’s map plus Michigan plus Wisconsin equals 269.

At that point, Nebraska’s 2nd congressional district would matter a great deal, to put it mildly, which is why Trump is there tonight.”

It’s possible that very scenario is happening. Clinton’s map of 232 electoral votes is all but certain to have been won by Biden, albeit with his lead in Nevada admittedly thin. If one adds those flipped states of Wisconsin (10 votes) and Arizona (11), as predicted, he is sitting on 253.

But, ah, Biden won Nebraska’s lone electoral vote for the 2nd congressional district anchored by Omaha and its suburbs. That’s the one Trump was so desperate to pick up.

There’s a good chance Biden won both. It’s especially likely that he won Michigan. If it’s just one of the two states, Biden hits the magic number of 270 without Pennsylvania, which may cost Trump’s lawyers many billable hours.

If that happens, historians will have a field day with Trump’s botched rally in Omaha. Also reported here, on October 28, Trump’s Omaha rally ended in disaster. After just one hour of blathering, Trump jetted away, only to leave thousands of supporters stranded literally out in the cold--in sub-freezing wind chill conditions-- with not enough buses to bring them back to their cars.

Several ended up in the hospital. And while none of the Trump faithful likely switched their votes over being iced by their dear leader, the local Omaha media coverage that followed had to be brutal. If Biden ends up at 270 electors on the strength of that one little vote, it truly will have been a historic event.

But it’s still just about the math.