Trump probably 'can’t steal the election' — but here's why you should be 'alarmed' anyway: conservative 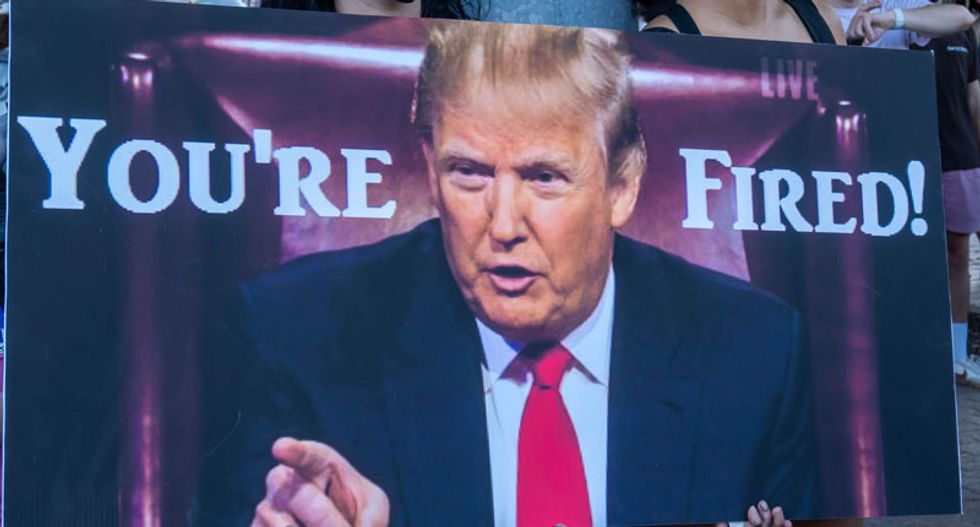 Women hold a "You're fired" sign with image of Donald Trump at a Biden victory celebration in Austin, Texas. (Never Settle Media / Shutterstock.com)

Although President-elect Joe Biden has won a decisive victory in the United States' 2020 presidential election and defeated President Donald Trump by at least 4.2 million votes — flipping Pennsylvania, Michigan and other key battleground states that Trump won in 2016 — many Democrats are nervous. Trump is refusing to concede defeat and is vowing to fight the election results in court. Never Trump conservative William Kristol addresses their fears in an article published in The Bulwark on November 9, writing that although Trump's legal arguments and voter fraud claims are bogus, his opponents should keep a close eye on him and be "alarmed" anyway.

Kristol explains that in order for Trump to "steal the election," he would "have to convince state or federal courts of ridiculous arguments. He'd have to flip not one, but three states. And state legislative leaders have shown no interest in the faux-originalist argument that they can ignore the voters of their states — and the laws of their states — and appoint their own slate of electors."

Kristol adds, however, that although "that view is probably correct…. what if the demagoguery about election fraud and the sophistry about the prerogatives of state legislatures is repeated over and over for four weeks by Trump and his surrogates, and isn't refuted by many, if any, prominent conservatives and Republicans? And what do we make of (Senate Majority Leader) Mitch McConnell refusing to acknowledge the election results today?"

The Never Trump conservative discusses a concern that some Trump critics have been raising: what if Republican officials in individual states that Biden won refuse to accept the election results?

Kristol writes, "Are we 100 percent certain this doesn't soften the ground enough so that what seems almost unthinkable now becomes thinkable? Are we 100 percent certain the state legislature in, say, Georgia, won't start considering things that now seem outside the realm of the possible? And if the unthinkable actually happens in Georgia, are we certain that it could not then happen in Wisconsin? And Pennsylvania?"

Kristol goes on to discuss the post-election firing of Defense Secretary Mark Esper, noting that CIA Director Gina Haspel and FBI Director Christopher Wray might be fired by Trump as well.

"Is it totally outside the realm of the possible that, with more compliant figures in charge of these parts of the government, 'information' might be revealed or plots 'discovered' that help legitimize not allowing the process to move forward to an Electoral College vote that would yield power to Joe Biden?," Kristol writes. "It's probably outside the realm of the possible. Probably 99% outside, but not 100 percent."

The anti-Trump conservative notes that he will be "mocked for alarmism" for voicing such concerns, but he wraps up his article by stressing that is better to be safe than sorry where democracy is concerned.

"If prominent Republicans and influential conservatives take the threat seriously, and speak and act against it, they can harden our institutional and civic defenses against any such threat," Kristol argues. "A little alarmism in the defense of liberty is no vice. Complacency in the defense of democracy is no virtue."