Trump supporters downcast but holding out until election results 'certified' 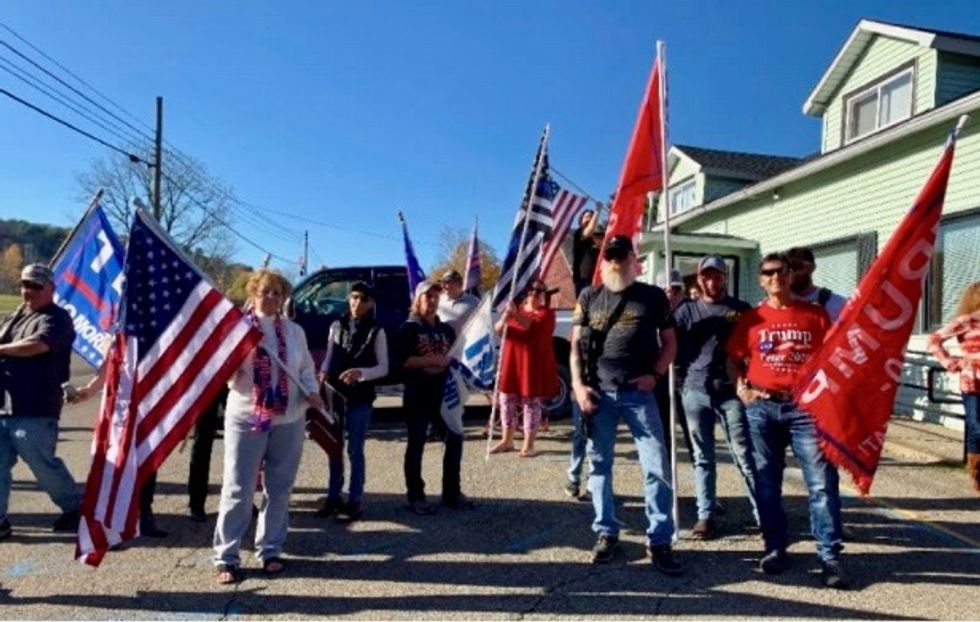 Supporters of US President Donald Trump outside Jones Diner in Towanda, Pennsylvania (AFP)

In the parking lot of Jones Diner, the supporters of President Donald Trump aren't ready to accept a Joe Biden victory until the election results are "certified" but signs of resignation are creeping in.

Towanda, a town of about 2,800 people in rural north-east Pennsylvania's Bradford County, is a Trump bastion.

Of the 30,000 people in the county who voted in Tuesday's election, nearly 72 percent cast their ballots for Trump, a tick higher than in 2016.

"We are at the heart of 'deplorable' country," said Bradford County Commissioner Doug McLinko, in a reference to Hillary Clinton's infamous characterization of Trump supporters.

Unsurprisingly, many of the attendees were downcast.

Blythe Jones, the owner of the restaurant, said she was "upset" when Biden's victory was announced.

Sue Wheeler, a 68-year-old retiree, said she was "very sad" while McLinko described himself as "angry."

"I have avoided the news since the election just because I so hoped Trump could take over and save the aborted children," Wheeler said. "I am so passionate about that."

Trump has not yet conceded defeat and his supporters here agreed that he should not do so until the various legal challenges launched by his campaign play out.

Above all, they said nothing should be done until the election results are certified, which takes place in Pennsylvania on November 23.

"You cannot announce a winner until it's certified," McLinko said. "And we're at a point now where we're so premature on that."

He said he did not watch Biden's victory speech on Saturday night.

"I did, not, I will not," he said. "And the reason I won't is because I'm not accepting him as president until it's certified."

"We don't want a concession speech until we know that every legal vote was counted, and we feel good about it and there's no corruption," McLinko said.

As for Trump, he said "I'm very proud of this man and he's got 70 million people who've got his back" -- a reference to the number of votes the president received.

Jones said she watched "just a couple of minutes" of Biden's speech.

"If they declare him president and it's all legal, then I'll listen to what he has to say," she said. "But until then I'm just gonna stay on the down low with him."

Jones said that once all of the Trump campaign lawsuits are heard and if they find that "everything was legal, you just have to let it go."

In his speech, Biden called for Americans to unify after the bitterly contested election campaign and end what he called the "grim era of demonization."

Jones said she is willing to give Biden, Barack Obama's vice president for eight years, a chance.

"If he could be fair and if he could listen to us, the working class people, the people that are paying the taxes and paying their salaries, instead of just handing everything out, I think we could all get along," she said.

"We did it with Obama -- I mean, he was our president -- we might not have seen eye to eye but he was still our president," Jones said.

Eamon Daley, 28, who runs an asphalt company with his brother, said he was "obviously disappointed" with the result but it was time to overcome the polarization in the country.

"It definitely is," Daley said. "You have to start doing it now. Before it's too late."

"Honestly, I don't know if there's a lot Joe Biden can do to unify the country," he said. "I think it's up to the country itself.

"I think it's up to the people in America," Daley said. "We have to stop looking at one another's differences, try to find some common ground.

"At the end of the day we're all Americans."