Donald Trump tries to sow discord with video of election workers legally collecting ballots: ‘Is this what our country has come to?’ 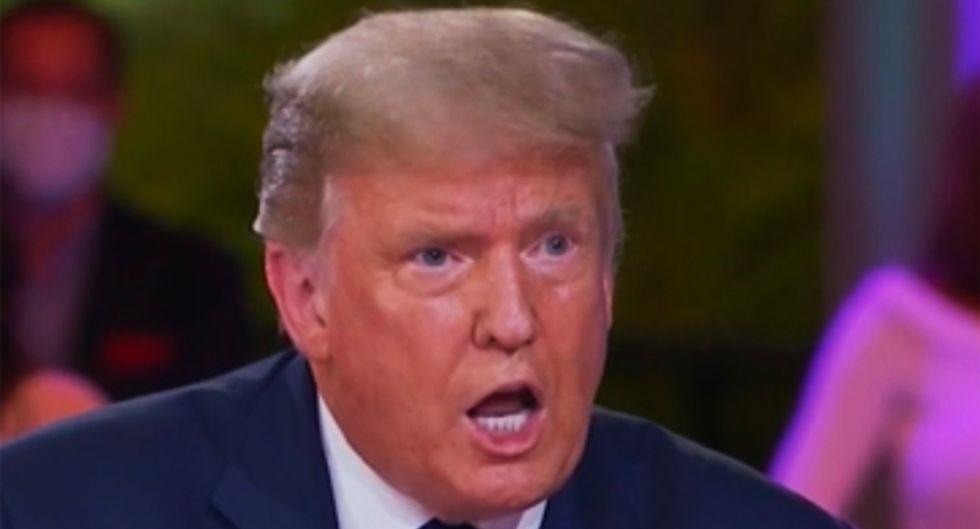 President Donald Trump in a Twitter temper tantrum tweeted a video that immediately went viral. It appears to show two election workers in an unidentified though public street location, collecting what are supposedly ballots and placing them into suitcases/carryalls.

The person behind the camera, a woman, tells the workers she is "documenting" them. They do not appear to be doing anything wrong. At one point they ask her to keep a distance of six feet and note she's not wearing a mask.

As they're working, she continues to harass them, and they show her their ID as they continue to work.

The video has no date, time, or place, and Trump's tweet provides no context.

But the President does manage to create massive concern and outrage by saying, "You are looking at BALLOTS! Is this what our Country has come to?"

His goal in tweeting out the video is to sow distrust in the U.S. election system, and by the massive number of retweeets and responses, it's clear he has succeeded.

Again, he provides no context for the video. It could have been recorded last week or last month. It could be staged and fake. It could be real but filmed in another country. There is no way of knowing because Trump intentionally hasn't told anyone.

It is pure propaganda.

That he did it on Veterans Day makes it all the more despicable.

The video has more than 2.2 million views in just one hour.

The video, it turn out, is real, but from November 4.

"L.A. County officials told Reuters that these ballots were collected on Nov. 4 but were deposited by voters on or before Nov. 3. They are therefore valid and will be processed and counted."

“All vote by mail ballot drop boxes were closed and locked at 8 PM on Election Day. Ballots from all boxes throughout the County were picked up the following day,” Mike Sanchez, a spokesman for the L.A. County Registrar-Recorder/County Clerk, told Reuters.

In other words, there's nothing nefarious or untoward, or wrong about what these two men were doing.

The only wrongdoer in this scenario is President Donald Trump.