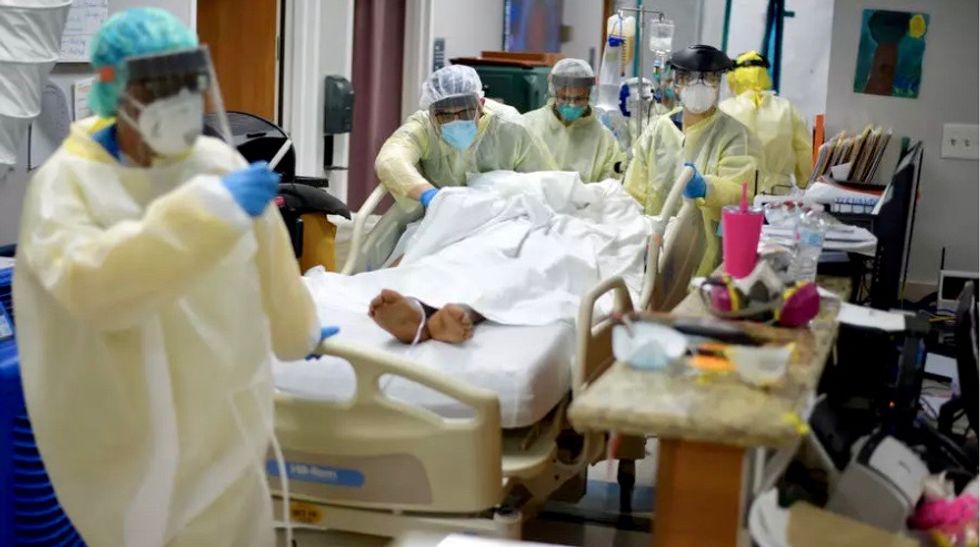 The United States on Tuesday registered a record 200,000 new Covid-19 cases in one day, highlighting the desperate need for a vaccine after results from one medical trial fuelled optimism around the world.

The vaccine news brought some relief from an otherwise grim picture, with tighter restrictions imposed in Europe and the Middle East, and a surge in the US claiming 1,535 lives in 24 hours.

Stocks in some industries hit hardest by travel curbs, social distancing and lockdowns rebounded on hopes that the world may return to normal, after pharma giant Pfizer and its German partner BioNTech announced Monday that their vaccine candidate was 90 percent effective.

A vaccine is seen as the best chance to break the cycle of deadly virus surges and severe restrictions across much of the world since Covid-19 first emerged in China late last year and ballooned into a pandemic.

Pfizer and BioNTech said they could supply up to 50 million doses of the vaccine globally this year and up to 1.3 billion next year if it receives approval.

The scientific community reacted positively overall -- although the trial is still ongoing and the vaccine candidate would need to be stored in specialist deep freezers, creating huge supply chain complications.

The vaccine candidate is one of more than 40, but no other developer has yet made similar claims about effectiveness.

There was also promising news from Brussels, where the EU parliament and member states struck a deal to pass the bloc's multi-annual budget, unblocking 750 billion euros ($886 billion) in coronavirus recovery funds.

Dacian Ciolos, head of the parliament's centrist Renew Europe Group, called the agreement "a game-changer" for Europeans facing adversity from the pandemic.

The novel coronavirus has infected close to 51 million people worldwide, with more than 1.2 million deaths.

On Tuesday, 6,867 new deaths were recorded worldwide, with the highest daily tolls in France, Spain and the United States.

The US remains the hardest-hit nation at more than 10 million cases and nearly 240,000 deaths, with shocking new data now including a record 60,000 current hospitalizations.

The pandemic was one of the top issues for voters in last week's presidential election.

Joe Biden, who had slammed President Donald Trump's handling of the crisis, spared no time in announcing a Covid-19 taskforce on Monday after being declared president-elect.

Trump had clashed repeatedly with his own government experts, often refusing to back restrictions or even wear a mask in public. After the Pfizer announcement, he claimed -- without evidence -- that the news was delayed until after the election to damage him.

There was a separate breakthrough when the US Food and Drug Administration on Monday granted emergency approval to a synthetic antibody treatment developed by the pharma company Eli Lilly.

Bamlanivimab, which was shown to reduce the risk of hospitalization and emergency room visits, is the first major drug to be approved that was designed specifically for the coronavirus.

Despite encouraging news on the medical front, rising infection and death rates have left many governments struggling to cope.

Brazil's far-right president Jair Bolsonaro -- who has downplayed the virus even as it has killed 163,000 people in his country -- lashed out with a homophobic rant.

"I regret the deaths. I really do. But we're all going to die someday. There's no use fleeing reality. We have to stop being a country of fags," he said in a speech. "We have to face up to it and fight. I hate this faggot stuff."

In Italy, virus restrictions were increased in five of the country's 20 regions on Tuesday.

Hungary, one of the hardest-hit countries in terms of deaths in proportion to the population, has also announced new measures to come into force on Wednesday.

Elsewhere on the continent, Albania imposed a night-time curfew and Estonian President Kersti Kaljulaid went into self-isolation after coming into contact with someone diagnosed with Covid-19.

In Greece, the government stopped supermarkets from selling "non-essential goods" in order to avoid unfair competition against smaller shops that have been forced to close, following a similar move in France.

In the Middle East, Lebanon on Tuesday announced a fresh two-week lockdown despite a grinding economic crisis that has already battered businesses.

"We've reached a stage of critical danger as private and public hospitals don't have the capacity to receive severe cases," the country's caretaker prime minister, Hassan Diab, said in a televised address.

Palestinian president Mahmud Abbas called the passing of "a brother and friend... a great loss for Palestine and our people".