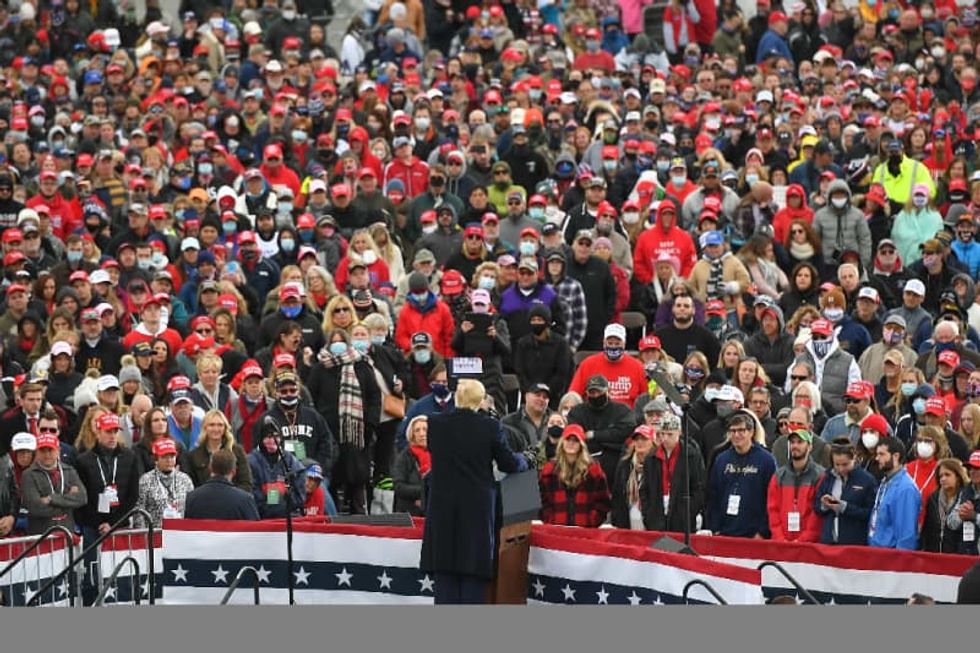 President Donald Trump gazed over the thicket of supporters wearing his branded red baseball caps and marveled at the crowds he'd witnessed while driving in his motorcade to give the speech in Pennsylvania.

"Nobody's ever seen anything like this," he said to cheers on Saturday as he began his final sprint for reelection.

Trump was speaking at a small rally by his standards -- a few hundred people in a field in the picturesque rural community of Newtown.

But although he was exaggerating about the many "thousands" of fans along the road to the rally, he was right that they'd turned out in impressive numbers, waiting for him for hours in the cold, only three days before polling day.

Trump was soon back on Air Force One, flying from Newtown across Pennsylvania to Reading, where a bigger crowd of thousands crammed together, ignoring Covid-19 precautions, on the airport tarmac.

An hour or so later, he was flying again, this time to Butler and an even bigger crowd.

With temperatures dipping steadily, he still had another rally to go in the state, which he almost certainly has to win on Tuesday to get that second term.

Polls show Trump behind Democrat Joe Biden. But the rallies clearly give him hope.

"Did you see the crowds? It looks like Broadway, only slightly more picturesque!" he said.

"Is there a better place to be, any place, any time, than a Trump rally?" he asked later.

At each stop, he delivered the one-man political theater his followers have come to expect.

The script is always basically the same -- a mix of hate against the media and stoking of conspiracies interspersed with jokes and anecdotes that wouldn't sound out of place on a radio talk show.

Somewhere in there, often lost in the jumble of Trump humor and Trump attacks, are traditional stump speech segments about the economy and his government's achievements.

To the crowds, comprised nearly exclusively of white and often working-class Americans, these performances are by now so familiar that they know exactly when to cheer, to boo or to respond in a kind of interactive give-and-take.

"Lock him up!" they chant when Trump lays out shadowy allegations of corruption against Biden.

"Scumbags!" cries a man when Trump savages the media.

"How do you do it?" a woman calls out when Trump describes his exhausting travel schedule.

"We love you!" everyone chants at length.

If Trump stuns the world again by beating the polls on Tuesday, the answer to the question of how it happened may turn out to have been in plain sight all along -- his energetic ground game centered around those rallies.

Often dismissed by the media as populist circuses, and attacked as outrageous health hazards by the Covid-conscious Biden, these Trump fests are nevertheless a remarkable phenomenon.

The presidents' supporters literally will risk their health or even life to attend.

Just in the last few days they've collapsed from the heat in Florida and been left stranded in freezing temperatures after a rally in Omaha.

A new Stanford University study estimates that 700 people have died and 30,000 have caught the coronavirus as a result of just 18 rallies.

And it's not just rallies. It's the boat armadas, the truck convoys and aggressive lawn sign campaigns proclaiming his name around the country in a way that has not been seen before in US politics.

To Trump, the opinion polls proclaiming his likely defeat are all "fake."

The only poll to trust, he tells his crowds, are the rallies -- huge for him, mostly tiny for Biden, who has stuck to rigorous social distancing rules.

"They see it forming on all sides and there's not a thing they can do about it."

Perhaps the rallies will turn out to have been just noise -- not a victory cry but the dying gasp of the Trump phenomenon.

Some analysts suggest that even if Biden has smaller crowds, the historic lines of early voters seen around the country might turn out to be his version of the president's rallies.

These questions will only be answered after the polls close on Tuesday.

Until then, the Republican showman is betting everything on his power of attraction to carry him to a repeat of his 2016 upset. Saturday features four rallies, Sunday five, Monday another five.

"This doesn't seem like someone who's going to come in second, don't you agree?" Trump told the Reading crowd, which cheered back under the wintry gray skies.